[ We are back~ Before anything, we just wanted to give another huge thank you to everyone who has been continuously supporting us on our patreon and who's beeing plowing through TNBS so far! We're so happy to see you guys flipping through the chapters and staying up to date with the latest uploads.

Might be getting old but we can't express how much we appreciate it. 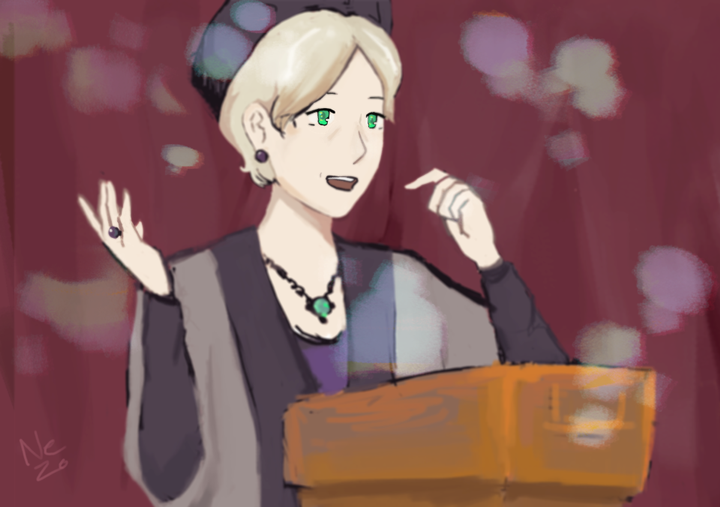 "Welcome students, welcome to your return." Said Earlteria with a smile so warm. Students and teachers alike were beaming calmly in return.

The school's spring semester had begun, students were all aligned at the center-field while the teachers and faculty members were seated at the back of the podium; all of whom were listening to Earlteria's soothing voice.

"I hope all your vacations were fruitful and fun."

The protagonist's party smiled once more. At the moment, Andrew, Namiku and Rinca were listening and enjoying the principal's antics.

Note was busy talking to Rizaul who was also in a good mood to reply. While Viola was with her friends, Noveam and Marcha, sharing the events of their trip to one another.

They were divided by their sections yet even so, their thoughts were intertwined. Through their vacation and under the guise of training, their friendship had grown.

As for the rest of the students, Casper was with Wendy being all lovey dovey, while the nobles and adventurers of Mundo were all happily talking with their peers.

Still, not all were vibing. Especially with regards to a certain duo, for they were at it again in their own little world.

• Give me a break, you're just hungry, that's why you wanted to wake up. •

"Of course, fun times you shall experience once again in school, well aside from studying. Wait, I mean---."

Upon saying that, her eyes widened from her blunder.

Earlteria added on with a proud triumphant face. It was apparent she was happy with her comeback.

Some of the students chuckled while the teachers began sighing wryly. Yet the cheerful principal of Esuela dio sa de continued on with her speech.

As the morning assembly ended, the crowd scattered; most students headed to their classrooms, while others felt like skipping. Some even began training for the sports festival that was to come.

It was a bright colorful morning, yet not all could enjoy that ambiance of bliss. Far from the joyous noise and classes, Naell and Owly began their day at the library which they had both missed.

They then started piling up their long awaited prize; comics for the bird and random books for the young master. [ poof ] they summoned food and drinks upon their table, all of which were neatly placed around the gathered books.

The snacks consisted of food Naell was very familiar with. This being Mundo's potato crisps, a known staple of snacks. Its fried fragrance lingered around them yet not one page in the library was at all affected.

A look of contentment was on Naell's face as he closed his eyes and smiled. The scent of a thousand pages was still distinct amidst the room of fried food.

Even long before Naell thought it was all too convenient. On the first time he dined in the library, he was baffled by the incredible book smell that seemed to never fade.

It was only after several visits that Naell realized the magic behind it: Immaculate conservation magic, casted among every book.

'Maybe that's why I was immediately more fond of libraries on Mundo...'

• What's with your face, have you gone insane from all your isolation, HOOT?•

Yet just the few words of a fat owl broke Naell's illusion of peace.

Thus, their day was spent, reading and arguing, until such time they (mostly Owly) decided to eat their dinner.

Upon their arrival, the canteen was with many people chattering while happily eating their food.

That immediately tired Naell out and sure enough, the protagonist's party was also there.

Upon seeing him and Owly, Note waved his hand, and instantly Naell found himself in the pit of youth.

"I don't know why, but I miss the food here." Said Note as he took a big bite of his steak.

Andrew, Rizaul, and Owly nodded as they ate plenty as well. They all hummed in a tune as the juicy beef with its tender meat gushed in their mouths.

"Fufufu... boys will be boys." Teased Namiku with an approving nod by the ladies.

Yet the men could only smile wryly as the desserts the ladies ordered were far more frivolous than their steaks.

'Sugar, spice, and everything... diabetic.'

Though none of them voiced out their thoughts, they all knew how feisty the ladies could be when it came to sweets.

Still, underneath all that, they were all having a good time. It was only Naell who, amidst their lively chatters, felt tired.

He had it coming from the moment he woke up. Naell knew that day would be tiresome. Nevertheless, he had no choice but to drag himself up as the beak that was pecking his face was really annoying.

'Atleast, I got to enjoy a peaceful day at the library.' He thought while sipping the calming yellow herb.

It did the trick yet only for a second as Viola with her keen eyes asked,

Oh how he wished to be in his bed as all their gazes focused on him. With no choice but to reply, he smiled and said,

Viola nodded followed by Andrew and the rest, yet Rinca was slightly uncomfortable just like him.

Even more so when both of their eyes met, causing them to struggle in finding a new place to gaze at. The scene was left unnoticed as Andrew and the rest chuckled.

Yet it was only Note who felt his cousin's pinch of disapproval.

''Ow... Seriously dear cousin, one day my life might end by your hands."

Rinca then retorted, her voice cold and her face holding a smile. Some onlookers felt the icy ambiance she just released, however it still was immensely beautiful.

''Then by all means, do enjoy it until then."

Note shivered at his cousin's words, and had even attempted to ask for help from whoever sat closest to him.

Yet the half-elf did not even bother to give a single glance. To top it all off, Namiku, the one he grew up with, was laughing rather hard.

In desperation, Note clinged to the hopes of nothingness, finding salvation towards Naell. Alas it was all for naught, as his nothingness immediately glanced elsewhere to take a long sip of his tea.

Andrew and the rest giggled while Note could only accept his defeat. In his steak he found solace, his now one true companion.

Yet just before he could take a bite of his new best friend, he overheard a lively table nearby.

Students from general studies were discussing a tiring project. They whined as they observed the books scattered across their table, one of which was very familiar to Note.

Putting down his fork and seemingly forgetting what just transpired, he then loudly said to his friends,

"Hey, are you guys done with the reading assignment?"

He glanced at everyone as he spoke, his eyes now glistening in enthusiasm.

Namiku was the first to respond as she coughed, looking fairly embarrassed upon admitting aloud,

"Then after this, let's do the assignment." Said Rinca who just a moment ago was sighing from her friend's revelation.

"Thank you! I just forgot about it, I believe it was the Valley... Abyss... trilogy something---"

Yet before Namiku could even finish her words, the air around Naell seemed to have erupted. He then quickly interjected, surprising all of them in the process.

"The Abyssal Valley series?! The entire trilogy's written so well that the author even---"

Naell stopped himself, realizing he had become far too open with his passion. Yet swiftly Note replied with a booming voice and a giant smile painted on his face,

"YEAH, The Abyssal Valley series! I thought it was amazing, and I'm not even fond of that genre!"

"Spoilers Naell, Namiku hasn't read it yet! But truly, when that "thing" appeared and threatened him--- it seriously gave me chills."

"Right? I really didn't expect that "thing" to do "that". I still really haven't gotten over it yet!"

As the two began geeking out while trying their best not to spoil any major plotpoints, the rest of the group simply watched in astonishment, enjoying their food and occasionally interjecting with opinions.

"What? Riz, you didn't like "that" part?" Note asked in pure bewilderment.

"Only because they hurt the tree for no reason, that was completely unnecessary."

"That's... understandable." Replied Naell with his eyebrows slightly furrowing. He could still recall the unjust treatment for the novel's pitiful character.

"Well, when did you read it, Naell?" Asked Note curiously.

He was well-aware that the magic department's reading assignment was different.

"During vacation in the Beryldot library. The final book was a new addition and it piqued my interest."

Soon enough, Note's hunch was right. Knowing the young master's daily routine, he was certain he had read it for leisure.

''Oho~ Speaking of Beryldot, how was your vacation, Naell? We heard your hometown was rather lively." Namiku asked while looking at him and Owly.

The young owl was the one who first replied, and told them telepathically how it was simply quite alright.

When Owly was further asked what he did all those times, he began happily rambling on about all the activities he did with his friends, and above all, the food they ate.

All of Owly's blabbering had awoken Naell, who immediately contemplated how he somehow lost his cool.

Calmly he regained his composure as he silently thanked Owly for stealing the show. Yet even that didn't last long as he felt their gazes lock onto him. Each of them seemingly awaited his reply.

"It was comfortable." Said Naell before sipping his tea. Although unspoken, all of them had an idea of what he meant by that.

"You meant the bed?" Note was the one who confirmed it together with Namiku.

Naell choked slightly upon hearing their words and simply turned away to continue with his tea. Owly however quickly confirmed their reply,

A sudden hint of distaste appeared on Rizaul's face, surprising them until he finally spoke,

"Naell, don't waste your time like that. After all, nature's the best location for sleeping."

Their shocked faces were instantly changed into disappointment, on the other hand, Naell was instantly amazed by the idea.

• You should stop giving him more ideas to laze around, HOOT. •

''It's also nice to eat outside with nature, Owly."

Time passed by in the cafeteria, as bit by bit students began to leave. Yet the night was still young for several adventurers who were to hold a group study.

"Alright, I suppose it's time to go and start. Isn't that right, Namiku?" An ice queen's chilling voice called out to her friend.

Fear instilled in Namiku, as she despised long texts with a passion, yet another thought of salvation came to her senses as she glanced at Naell.

That moment solidified one thought for the young master. Never again would he dare to expose his inner book nerd.

Transmigrated into a Noble’s beaten son
Oldest | Recent
Search
Your changes has been saved.
Action Required