Sorry for skipping a week's worth of updates. I am physically incapable of doing more than 1 thing per day. Will this happen again? Maybe. 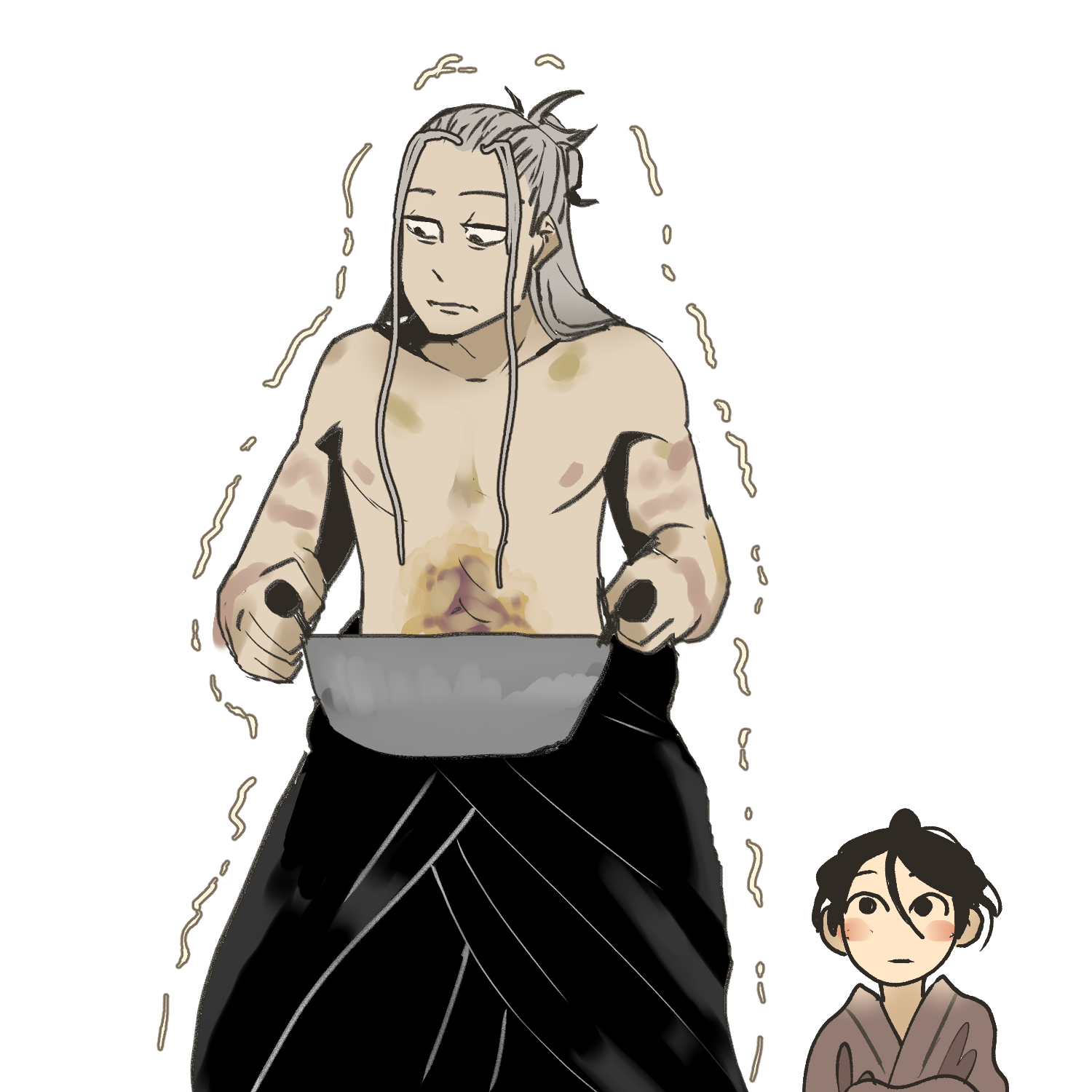 Xu Jian covered his tracks by barring the gate again and awkwardly leaning what remained of the door against the doorframe. the children did not seem impressed with his efforts.

As expected of a mansion, it was rather nice. Xu Jian didn't like ostentatious decor, and felt this well-kept-for yet understated kind of building was more attractive. As expected of a seasonal home, none of the lanterns were lit, and there weren't any people to be seen.

"What do you do if we're caught?" The girl asked.

The boys gasped. Xu Jian had only meant that he could just show off how strong he was and anyone who wanted to criticize him would be silenced, but that assumption was fine too.

Eventually he found a kitchen, and he decided the the best method of lying low would be to enjoy oneself. He shed two layers of his clothes and let the top half of his inner robes fall back, as he couldn't find a way to tie the sleeves back. Then he started rummaging through the food stores. He didn't know too many recipes, but there seemed to be enough to make jiaozi dumplings, at least. So dumplings he made.

They sat around on the floor, only vaguely watching him knead dough. It wasn't until he began kneading his third ball that they became intrigued.

"How many are you making?"

"Enough for five mouths," he dismissed.

Xu Jian completed his eighth ball of dough, and felt that any more would be wasteful. It was simple to do it by hand with his new body, and kneading had a relaxing effect, but he didn't want to prepare too much. He moved onto the stuffing. It was trickier; there didn't seem to be much in the way of fresh food being kept in the building. He normally ate his dumplings with meat.

"I shouldn't have started so soon," he lamented aloud. Then he pointed at the children. "Each of you take a string of bronze cash from the coffers and go buy meat, vegetables, and eggs."

They instantly scuttled off without asking questions. Xu Jian placed his hands on his hips. He didn't want to just wait around.

There was plenty of rice, so he decided to focus on that instead. He poured some into a large bowl and washed it using the water stored on hand. It took a little searching, but he found flint to light the stove, and poured the rice into a pot. None of it looked anything close to the modern world's level of cookware, but it still worked.

He stirred the rice in the pot, got bored, and poured out a second pot. He missed breakfast, after all.

The kids returned back with with his grocery order, looking to be in good spirits. He had to grind the raw meat himself, but it wasn't too bothersome. They looked on curiously as he added various veggies and spices to both his fillings and then the rice; first things that were natural choices, then unusual, then excessive. He didn't acknowledge their curiosity.

Xu Jian bounced back and forth between his rice and his jiaozi, and decided it was easier to stick to just boiling and pan-frying. The younger of the boys eventually got bored and began nosing around the pantry.

"Out of there," Xu Jian sniped, making the child jump. "If you're bored, go set the table."

"Where's the table?" The boy asked.

"Better go and find it."

The boy paused, then scuttled off. The girl and one of the brothers followed, but the eldest of the boys stayed to watch Xu Jian cook. He wasn't doing much, even though he had quite a few dishes cooking, but foodies could be found in every era. Apparently the dining hall was nearby, because he could hear screaming and arguing just outside the kitchen.

As he began finishing some of the food, he noted that this meal might be too heavy for them, so he sorted through the tea leaves in the pantry. He picked out a few cakes of fermented tea leaves and gathered a bit of dried fruits into his sleeve. The boy watched rapturously as he tossed sugarcane on his pile of ingredients. It was probably rarer in this time and place, but it wasn't his house and he just robbed a bank, so that wasn't his problem.

After over two hours, he had a luxurious meal. Xu Jian pulled his clothes back on, grabbed a pot, and pointed with his chin. "Help me carry."

The two of them brought the food in while avoiding the other children, who were running around the halls like excitable little puppies. When the teapots were brought in, they finally settled long enough to jump in their seats and wait for Xu Jian to settle so they could serve themselves. It was like herding dogs.

Xu Jian tapped his bowl with his chopsticks once. "Take what you like."

They descended upon the generous servings, though even with their obvious appetites, they kept their portions small. Xu Jian had missed both breakfast and lunch, and had no such hesitation; he stacked his bowl as high as it could go. Even the sister, who had filled her bowl the most, looked queasy at him.

"Will you be able to eat all that?"

"I missed two meals. My health is bad, so when I don't get nutrition, I become very weak," Xu Jian said smoothly.

"Is that why you're always shaking?"

"I am shaking because I'm ill."

The youngest swallowed his mouthful. "You look like a grandpa."

The girl narrowed her eyes. "Who would beat up a sick person?"

"Some old friends of mine. They followed me because I was strong. When I became weak, they treated me badly, in order to feel strong. Then a foolish and prideful demon from the mountains came into my town and rescued me."

"He's a very stupid guy. But he isn't bad," Xu Jian agreed. He committed some heinous things, but lost his mind to the demonic equivalent of Qi Deviation. Qi Food Poisoning. Could happen to anyone.

"Isn't he looking for you?"

"It's natural to look for a person who is missing." He stuffed his face with jiaozi.

"Why did you go missing?"

Xu Jian intentionally kept his chewing slow, making the girl become more and more nervous. Finally, he washed it down with a cup of tea. "He's not only a stupid guy, but an annoying guy. He's not only an annoying guy, he's a sticky guy. When you grow up, don't feel the need to bow to such people. They're wastes of your valuable time."

He punctuated his statement with another tap of his chopsticks against his bowl. None of them looked like they thought that was an acceptable answer, but they also seemed unwilling to say anything.

The children finished their meals quickly, and drank tea as Xu Jian demolished his massive portion. He still had room after he was done, so he served himself a few more dumplings. He was pleased this body was capable of putting so much away. His muscles were cut even before he was locked up; where on earth did Xu Jinyue put all his food? It wasn't as if he needed to eat this much. He had subsided just fine on meager meals. Cultivators were scary.

When everyone was done, Xu Jian finally decided to pay attention to the system. He didn't like talking to it unless he was alone, but with his new power, it was necessary.

Xu Jian tapped the pot of what little remained of the rice with his chopsticks. To his delight, it vanished in an explosion of rainbow cubes. The children jerked back in shock. He ignored them, tapping the teapots too.

They looked relieved. The girl raised her hand. "May I use it?"

"Come now. Scatter once more. I need to find a study." He waved his hand over them.

Ying Long was very clearly deeply upset with him, and Xu Jian had left while he was already angry. He wasn't worried for his safety, but he also didn't trust that he was going to get out of this unpunished. He needed to research the area and figure out where he planned on going in the event of his departure. He had an entire bank just outside, so he didn't need to worry about funds. He was certain the collective storefronts wouldn't mind losing a few taels of silver.

They did find a study, one that reminded him more of Liu Tiesheng's than the medicine hall's. He flipped through drawers, then through scrolls, until he finally got his hands on a map.

"Perfect," he said proudly. "Now, you lot. Tell me what you can about the area."