While some medic-nins came to take Dosu's corspe, Eiji walked upwards towards the spectator area, but he didn't walk to his team.

Instead he walked towards the Sunagakure-shinobis.

Eiji ignored him and walked past him and Gaara straight towards Temari.

And then he slapped her butt.

Everyone watched his actions and were completely speechless.

Normally Temari would kill anyone who would disrespect her, but Eiji's sheer amount of shamelessness shocked her so much that she was speechless.

"I take your silence as a no. Well, not everyone can understand my charms..." - Eiji shrugged his shoulder while staying next to them, since the next match was about to start.

Was this the same guy who just killed an opponent coldbloodedly just a moment ago?

He changed so fast again!

But now everyone knew that he wasn't as simple as they though and to not buy into his act.

"Man, everyone is some kind of freak here, I wanna go home..." - Shikamaru

"EVERYONE?! DID YOU REALLY CALL ME A FREAK JUST NOW?!" - Ino

'I really wonder if those three will be alright...' - Asuma

Meanwhile Temari recovered from her shock.

She wanted to kill Eiji straight away, but then she noticed that there was a hidden paper on her butt, where he slapped her.

"I'm going to the bathroom, I need to wash my clothes after being touched by this disgusting guy."

"Hey isn't that a bit to rude?" - said the one who just slapped a girl's butt without consent.

She ignored him and disappeared.

"..." - Gaara was gloomy as ever and no one knew what creepy things he was thinking about.

"Do we really have to kill each other?" - said Hinata worryingly.

"No, you don't have to. And if your opponent tries to kill you, don't worryy I will step in before that happens." - Kurenai

"Uhm, Hinata I think now is not the time to be concerned about that..." - Kiba pointed towards the screen, where the names for the next match were shown.

It was Hinata vs Neji.

'Now there is another monster beside Gaara and Eiji. Better start gathering some intel.'

He then looked at Eiji who was next to him:" Hey can you tell me about this Hyuga Neji guy?"

"Ha? Oh sorry, you want to know about Neji? Well, he is a Hyuaga. The Hyuga clan is known for looking ugly with their white eyes. When they activate their eyes, they become even uglier..." - Eiji

Safe to say, thinks played out the same, with it ending by Naruto smearing Hinata's blood on his fist and vowing to defeat Neji.

But then when the next combatants where shown, it was actually Naruto's turn.

"You are just some loser who doesn't know his place. You vowed to defeat a Hyuga? HAHAHA I will destroy you like the vermin your are!" - Yoroi

"WHAT?! I WILL SHOW YOU!!!" - Naruto rushed straight at his opponent.

But he was instantly knocked on the ground by his opponent, who grabbed Naruto's hand with his face.

"HAHA, how do you like it? I can absorb the chakra of my opponents just from touching them!" - Yoroi

"WHAT IS WRONG WITH YOU?! I KEEP SUCKING YOUR CHAKRA BUT YOU STILL HAVE THE ENERGY TO STRUGGLE?! HOW MUCH CHAKRA DO YOU HAVE?!" - Yoroi

"Looks like Naruto's opponent got the worst matchup, this may last a while..." - Kakashi

Meanwhile Temari was in a bathroom cabin where she could read the letter from Eiji.

What could be so important that a shinobi of another village would get to such lengths to give her a secret letter with no one noticing?

To say that she wasn't nervous, would be a lie.

She breathed in heavily and calmed down.

Then she took the disguised letter from her butt.

But when she saw that the letter was glued with booger on her butt, her seriousness and nervousness disappeared instantly!

Was a day longer without a chapter than I thought. Well, sometimes things don't go according to plan, especially if you are as good at procrastinating as I am. I'm sorry. 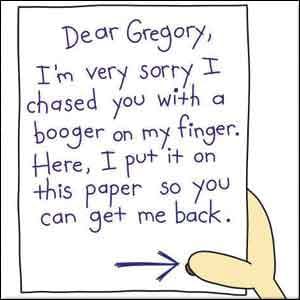 Mob without system in naruto world
Oldest | Recent
Search
Your changes has been saved.
Action Required