“[...]It is in the opinion of the General Inspector that, without immediate action, the water treatment systems keeping the city functional will fail within six to nine months.

This situation is a ticking time bomb. The system currently in place was designed for civilian use, and the number of corporate entities piggy-backing on it is causing shortages, back-ups and pressure issues across the entire mechanism.

If we do not immediately begin to repair this damage, this city might soon find itself without water or sewerage.

At least the sewage issues will be alleviated once the population no longer has access to water.”

The first step in my plan, which I was officially dubbing “Operation: Fuck the Doc” required Gomorrah and I be able to reach the doc so we could, in a figurative sense, fuck him.

The problem was that we were three floors up and I didn’t trust my power armour that much. Not enough to risk a plunge from this height, at least. “We need to get down there,” I muttered.

Gomorrah stepped next to me, then looked around. “There’s a rope right there,” she said, pointing.

There was a cord, thick steel wire running from the ceiling all the way down to the ground level. It had lights hanging off of it every metre or so. “Yeah, I guess I could use that,” I said. Like sliding down one of those stripper poles in a firefighter station. “Aren’t you worried you might give yourself friction burns?” I asked.

“Cat... I don’t know why you think that something like a rope would be able to burn me, but... I suppose I appreciate the concern, but it’s not necessary.”

“Fair enough,” I said. The rope was a good ways away, definitely out of reach unless I jumped.

My cybernetic hand wrapped around the metal cord and clamped shut. The entire thing swung, and me with it, lights rattling below me even as the rope started to screech past and I went from a swing to a barely assisted fall.

Falling, I discovered, happened fast. I didn’t have much time to react except to point my legs down as I rammed through light housings and sent them clattering down below me.

The Doc, his assistant, and the guard jumped up, and the dude in the tub squirmed around to look at the spot where I made my grand entrance.

I landed in a crouch, my entire body jarring within my suit, but it didn’t hurt. I wouldn’t do it for fun, but the suit definitely absorbed the impact. I stood, slow and careful, then faced the doc and his pals.

“What the fuck?” the assistant said. “What made the lights fall?”

Oh, right, I was still invisible.

Ruined my own big entrance.

At least when I was invisible, no one could tell how embarrassed I was.

“The suit did most of the work,” I said as I stepped out from the pile of broken light fixtures. As stealthy as my boots were, there was no stopping the crunch of glass and tin underfoot.

A sibilant hiss sounded out behind me, ending in a crunch as Gomorrah landed behind me. She stood, then picked up her launcher and aimed in Doc Hack’s general direction. “Back away from the man in the tub and raise your arms,” Gomorrah demanded.

“Who in the fuck are you?” Doc Hack asked.

I stepped to the side, my invisibility turning off. I wasn’t going to miss a second opportunity to be intimidating and cool. “We’re two girls that have spent far too many hours trawling through shit to get to you.”

I should warn you. I was trawling through Doc Hack’s systems and files for information. He has shut off his exterior connections. I intercepted every signal he sent out, but I no longer have direct access to his systems.

I made sure my next line wouldn’t be heard aloud. “Can’t hack back in?”

He disconnected by literally disconnecting any wireless systems in his body. A simple but efficient method to prevent tampering.

“Which corp are you two from?” Doc Hack asked. His head turned his head my way, then back to Gomorrah. His face was some uncanny valley shit. Like a mannequin’s face with some shitty mechanism giving it motion. It didn’t quite move in time with his voice.

“We’re not from any corporation,” Gomorrah said. “Now, please surrender. It would make all of this infinitely simpler.”

Doc Hack nodded. “So, the reports were correct. You are samurai. To think that the very guardians of humanity would interfere with the work we are doing here. Or... perhaps you don’t know better. Yes, that’s far more likely.”

Had he lost his mind? ... That was probably not the cleverest thought I’d had all day. The dude was chopping people up while living in a sewer.

“Look Doc, you’re doing some pretty fucked up shit, so we’re going to... you know, stop you from doing that. Permanently, if need be.”

Doc Hack raised his hands and gestured, as if telling us to calm down. It didn’t work all that well when the guy in the tub next to him started screaming again. “Please, dear samurai, you misunderstand what is happening here.”

“So you’re not kidnapping people off the streets, chopping off their limbs, then turning them into... actually, why in the fuck are you cutting people up? Unless you’re getting off on it.”

“Him getting off on it would be enough to explain all of this for you?” Gomorrah asked.

I shrugged. “People will do some weird shit if you let them. Wouldn’t make me shoot him any less.”

Doc Hack shook his head. “No, no, please, let me explain. This place—the sewers, the underground—it is the beating heart of this city. Its lifeblood pumps through day and night, every moment of the year. And we are the guardians of that heart, just as you are the guardians of humanity.”

“I don’t recall chopping people up while guarding humanity,” I said.

“That... that is a failure on my, on our, part,” Doc Hack said. He gestured to the rest of the room, but I had the impression he was trying to encompass the entirety of the sewers. “We failed to predict the future, to plan for the loss of so many of our members. And now the whole system suffers. Entire sections have been closed down and are being repaired, but in that time, the rest of the heart bleeds. We need more people, more valiant men and women on the front lines, fighting back against the rust and degradation that put the entire city at risk.”

“We will have new, voluntary members as time goes on. We always do. The lost, the homeless, those who, like myself, seek to hide from the oppression of the world above and find solace in the honest work here. But alas, those numbers are slow to come. We need more hands.”

“And you thought you’d just grab folk off the streets?” I asked.

Doc Hack nodded. “If we do nothing, the city dies. Already the water systems are falling apart, already the imbalances caused by the loss of entire districts are trickling down to the areas around them. Monsters inhabited the sewers for a time, and though they are gone, you guardians were not gentle in your exterminations.”

“Fucking hell, just put an ad out on the net if you need more workers!”

“Are you so naïve that you think people would want to come to a place like this? To become mutilated and defaced? To lose their humanity in order to save this city?” Doc Hack asked. He was becoming increasingly louder as he spoke. “This is a place of great sacrifice, where none will ever acknowledge the work that is done!”

“Sure, whatever, that doesn’t mean you can just... take people. For fuck’s sake,” I said.

“Who will do the work that needs doing if not us? We don’t expect much. We are the liquidators of this city's filth and the providers of its life! It is thankless, but no one else will do it. End me, and this city crumbles.”

My analysis suggests that he may be correct. The city’s water and sewer infrastructure have been due for an overhaul for nearly a decade. Without that overhaul, and with what little maintenance the system has been receiving so far, it is likely a chain collapse will occur at any moment. The Sewer Dragons seem to be working to postpone this.

“That doesn’t mean we won’t do something about this guy.” I glanced at the man in the tub before turning my glare to Doc Hack. “I... can’t allow this kind of thing in my city.”

I... might have forgotten to turn off the helmet’s speakers there.

“Not.. allow it? Then you would bring ruin to this city and all that we’ve done to protect it!” Doc Hack’s jacket burst open and a pair of arms moved out from a mass of metallic limbs, all of them holding onto handguns.

I'm so sorry for the delay! Today was busy, and I entirely forgot to post!

You can get your own copy of the paper and ebook here:

And of the audiobook (narrated by the incredible Reba Buhr) here:

I hope you enjoy! And if you do~ then consider leaving a review! 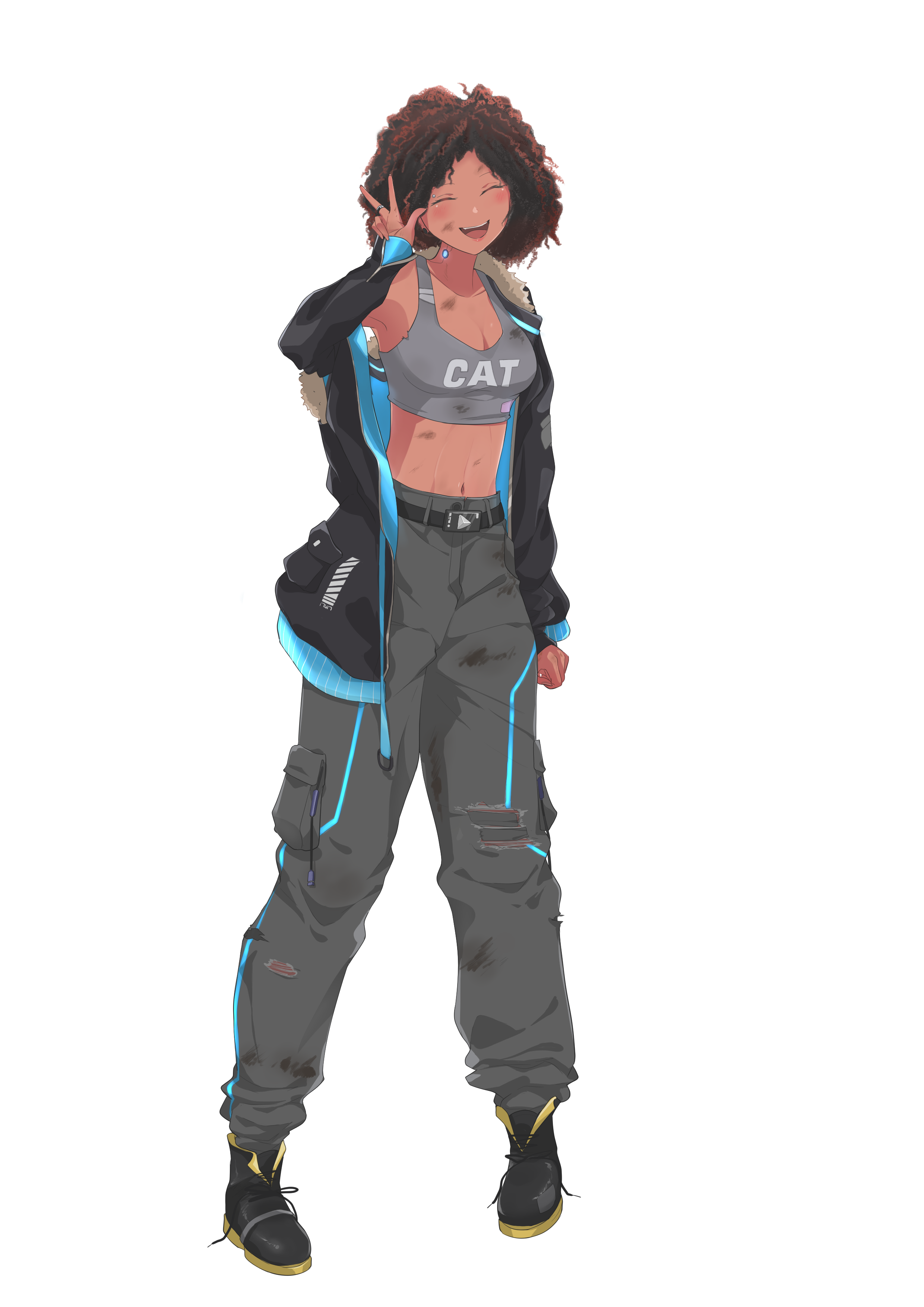 We have a pic of Lucy! From the incredible Larcian!

And here's one of Lucy and Cat: 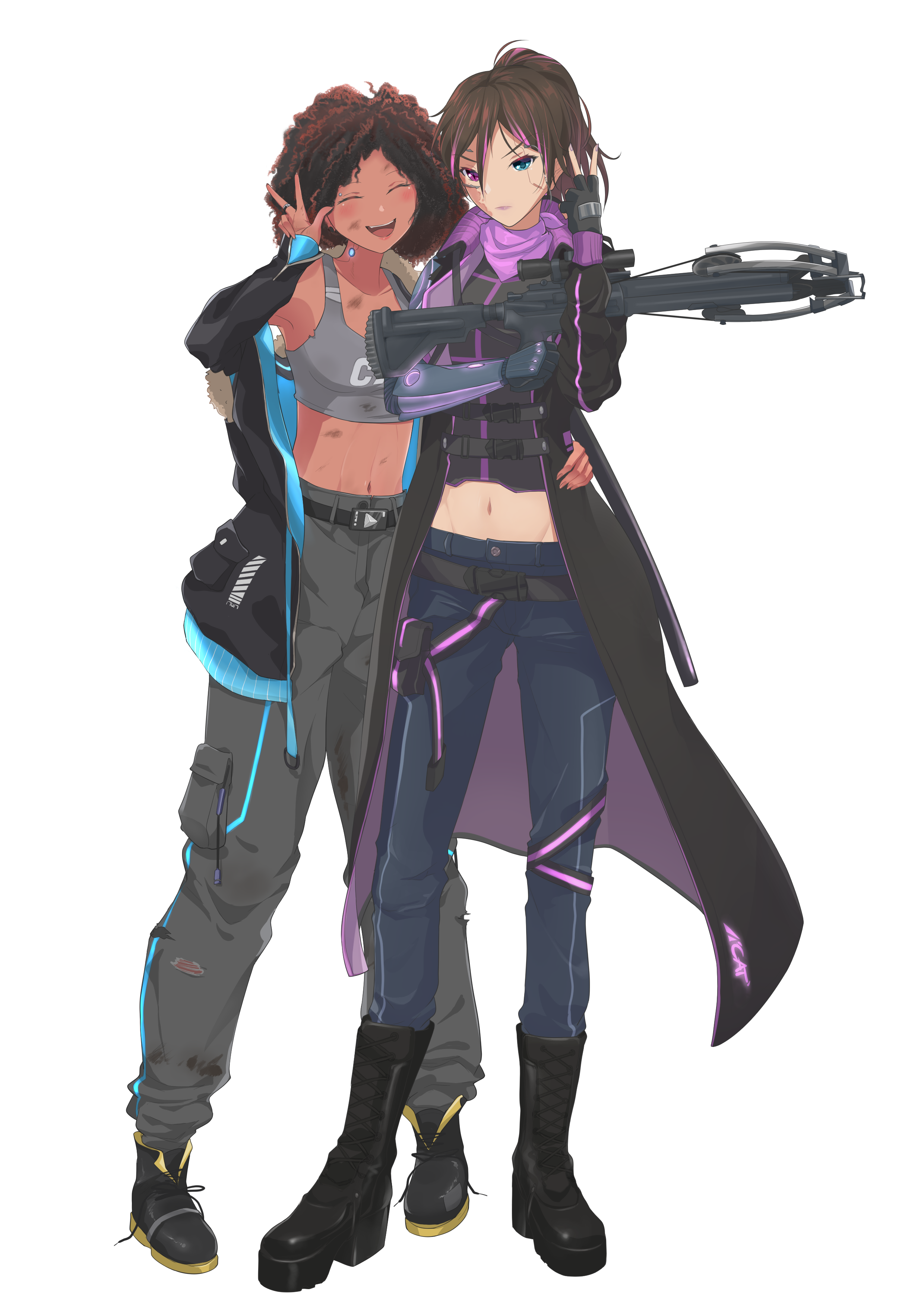