Play this to enjoy the atmosphere building up, thank you

The moment his words finished, my eyes turned wide at him. Straightening up my back in an instant as I stared at his expressionless face in utter disbelief.

“W-wait. hold on a sec! So you knew this was going to happen?!” I blabbered out as if Adrie's statement had sobered me up instantly.

“Alphonse… we both knew that the Flammia family’s underboss is the son of its Godfather himself. If I were to be in his shoes, surely I would have to settle down with anonymous arrangements the Godfather has set for me even if it goes against my will… including marriage. Faithfulness and obedience are in the Mafia's codes of titles after all,” Adrian lifted his head and turned his face to mine, gazing at me with half-lidded eyes.

“In conclusion, if Lenna was questioned to come along with them, surely an arranged marriage may be the end of the discussion,” He lifted his right palm in front of his face and blankly stared at it.

“And you kept that truth away from her and Kalem?” I asked, knowing the pain painted all over his face.

He simply nodded his head, no setbacks whatsoever.

“It is as you said, not a single second did I not think of the possibility of it happening. I was denying it the entire time we were on our way. I was keen to stay by her side when the discussion took place but was held back by my father,”

As his words ended, Adrie balled his right palm. Squinting his eyes as his fist took shape. Then what I saw was a clear image of a man whose heart was shattered into pieces. His fist became shaken, glassy Violet eyes, and an aching smile took hold of his lips. 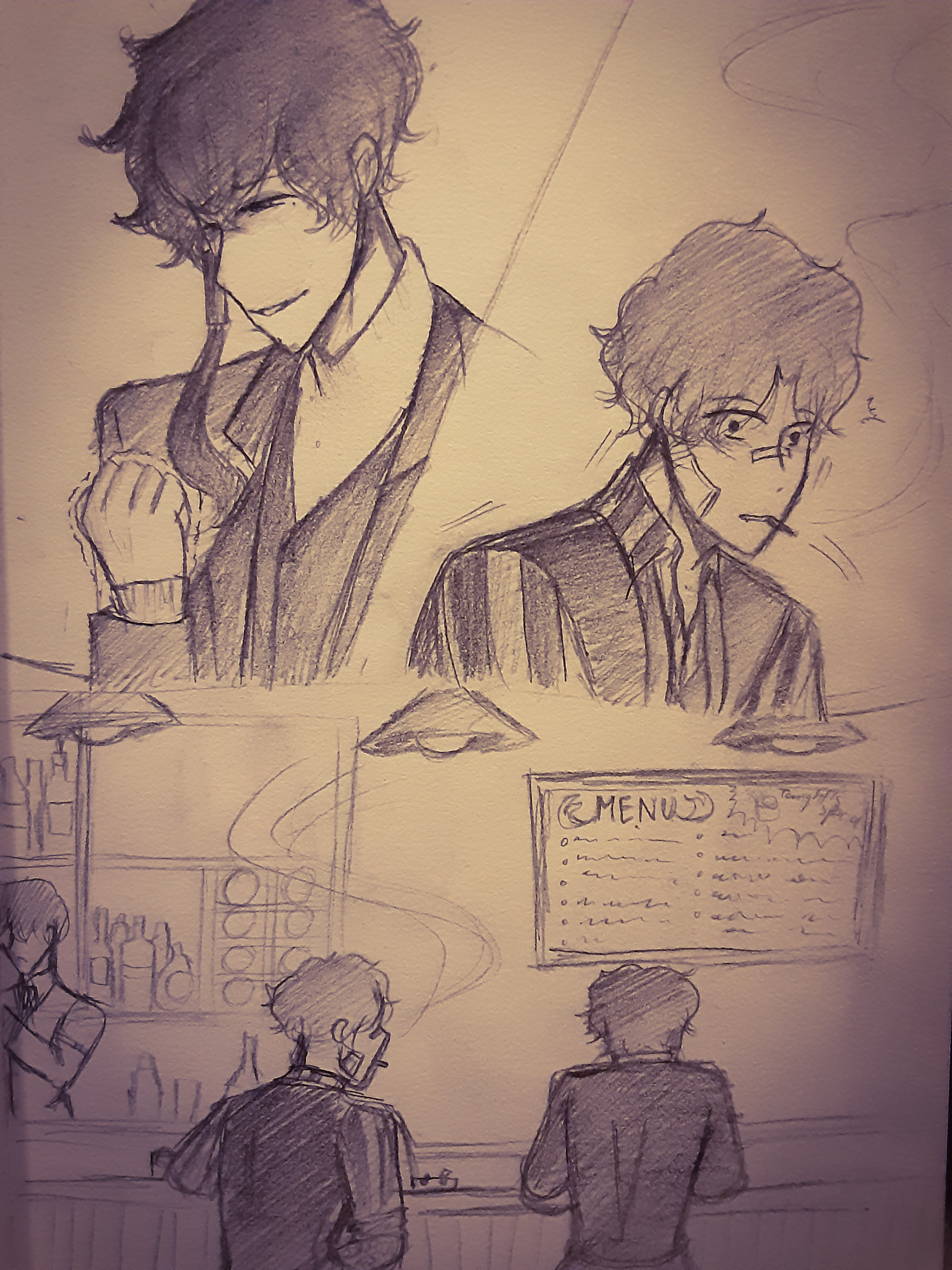 “There I was, watching helplessly as she declared to admit to the engagement…. And I couldn’t do anything to stop it… ” Adrian let out a hollow chuckle.

“Adrie..” I muttered, almost whimpering even looking at him hopelessly stare into nothingness

“Here I thought, I was the one who’s at fault for not preventing Lenny from coming along with them. Or if I could negotiate on the outcome if I was by her side, but in the end she made her stand. And I couldn’t convince her to change even if I tried,” Adrian shrugged off his shoulders lightly, letting out a slightly frustrated sigh.

“What could I say? She’s one stubborn woman, just like her own brother” He purposely averted his pupils at me with a cheeky smile.

“Who are you calling stubborn, dumbass?” I laughed as I lightly fisted his left shoulder.

“All I’m spitting out are none other than true facts. Also, it seems like we were on the same page nonetheless,” He crossed his arms.

“I do not blame you for what had happened, Alphonse. I have heard it all from your father himself a few days back,”

“My pops told you about that?” As I finished asking, Adrian replied with a firm nod.

“Information about the Mississipi Family are all invaluable as we speak. I would eventually do the same as you did if I was given the opportunity. Especially when there are only a few left of the incident, it is sacred for us even,” Adrian explained calmly, not showing any signs of emotional changes in his voice and expression.

“And I know better than to label the blame over you, as far as I can tell from your side of the story. How you got the rumors about the info being spread in the Flammia Family. Also, the fact that you coincidentally eavesdrop on them talking about that specific information. There could be only one thing why they would discuss it in the open,”

Adrian lifted his index finger up and gave me a stern gaze. One that he would simply give whenever he has deducted through his analysis.

“They were intentionally waiting for you to be lured in, including them having knowledge about your irresistible desire towards data. Which would explain why they're sure that you're going to fall into their trap. That my friend, concludes my research and reason why I have no hard feelings towards you,” He tensely crossed his arms and stared into my eyes. His’ are filled with a friendly atmosphere around his layers of Violet shaded irises.

Adrian could be one hell of a genius detective, he even surpasses Kalem in terms of logic. It’s fascinating as well as hair-raising at the same time, just one look and he could expose my flaws. Now, this is why I can’t escape his arguments, even in negotiations he would regularly beat my tongue out of it.

“However, I still have suspicions on some individuals. Someone from the inside must have crossed fingers at us, towards the whole South Region mob that is,” His brows knitted together in distress.

“Hmmm, who might that be? I can take care of them if you want to, snatch one or two. Might even use the usual method to interrogate ‘em,” I cooed, but instead I got a disapproval look from Adrie himself.

“I acknowledge your offer, but I must investigate it on my own… for personal reasons,” He peered his eyes right at me.

“I see, what a shame though,” I shrugged and lifted up the glass of Whiskey off the coaster, taking a quick sip from it.

“But now there’s nothing held back between us, right? No grudges or hard feelings?” I gave Adrian a sincere smirk and he returned it with a gentle smile.

“Of course, although… I do only have one regret regarding this...” He mentioned just a moment before I finished my drink.

“If only I had got together earlier with Lenny…It wouldn't end up like this...” His voice was filled with a hidden lament, I already saw through his facade.

Despite him giving everyone in front of his eyes polite gestures and gentle expression, behind it was a man that has gone through many trials and errors. Being a “normal” person by day, a Consigliere at night, and a hired hitman at certain times couldn’t fare well.

“However, what’s the use of resenting thyself for this matter as of now? I’m grateful that you’re concerned about me, Alphonse. Although let’s not dwell on the past, we have an important event after all tomorrow…” Adrian straightened his back up, slowly but surely crossing his arms as his eyes looked down on the booth.

”I may have to prepare to face her… to accept reality...”

I have high respect for him for many reasons, including personal ones. But the highest respect I have for him is his maturity. He doesn’t deal with anything emotionally, rather he’s logical and gets over problems pretty quickly. But when he does deal with emotional problems, he approaches them carefully and tried his best to resolve them in the best way possible.

And that’s why I know that he is perfect for my lil sis… He’s my sworn brother, we have been through tough shit together… He deserved better than this…

I smiled and looped my right arm around his shoulder and pulled him closer to my body, “You’ll do just fine, really. Lenny would be thrilled to see you, after all the arrangements she has to participate in. Besides, you’re one of her closest people, she wouldn’t sulk seeing you at her own “arranged” wedding,” I put a fist on Adrian’s left arm.

I giggled and leaned my head against Adrian’s, giving him a cheeky smirk. He glanced at me and let out a fulfilled sigh, bobbing his head for a response.

“I suppose the only reasonable thing to do is to take your offer. However, I won’t be downing on any alcoholic beverages since I’m driving.”

“HAHA, ALRIGHT!! That’s what I’m talking about!!” I slammed my hand against his back, causing him to suddenly choke and I pulled away.

“Hey, bartender!” I waved my left hand at the bartender for a moment until he noticed it

“C’mere for a sec, my buddy here wants a drink!”

Adrian frantically cleared his throat, trying to recover from the hit he took just a moment ago, “I-I would like one glass of Blackberry Mojito-”

“And fill my glass up again!” I lifted up my nearly empty glass up in the direction of the bartender.

I was tugged on the sides by Adrian, gazing at me with worrisome eyes, “Alphonse, you have had more than enough drinks for tonight,”

“Relaaaaaxx, Adrie. A few more gulps not gonna do anything to me”

“What did I tell you, Alphonse? Haven't you even learned your lesson on not pushing your boundaries?” I muttered as I carried along Alphonse’s drunken body outside of the bar.

Carrying him on the sides as I supposed his hip, gripping his left arm around my shoulder. His whole body weight pressured upon me, and the worst part has yet to come.

“dOn’T *hic* FuCKiNg leCtURe Me, ADRIE! ThE bArTeNder MUst HaVe SpIkEd *hic* THe GoDdAmN!... DrInK!” Alphonse complained slurry right next to my ear, lifting up a finger and slowly lowered it down.

“But you’re the one who made the call to add more amount-” All I got was getting poked deep on my cheeks after that sentence.

“SHHH... SHHh... shhh... shhh… Shut the FUCK up, Adrie” He muttered while sticking his words all over my face.

How wonderful, to think that my compassionate partner here was reasonable a few hours ago. I have to even apologize for the dramatic scene he put up at the bar earlier. It wasn’t that simple to convince the head bartender that this will not happen again.

At least he’s easy to carry, otherwise, I might have to call Kalem to pick him up himself. Another good thing, when Alphonse is drunk, his fear of cars wouldn’t show up, and that’s actually a relief. I never want him to come aboard my car, knowing it would trigger him, even the slightest change in his condition would end up terribly wrong.

“Let’s get you back to the mansion,” I carefully put his upper body, down flat on the roof of my car, his body looked like it was emerging to the surface.

“I wAnT MORE *hic* BooooozzzzEeee... NOt MeEtinG thAt fOuR EyES oF A bRoThER. Byyy ThE wAyyy, Adrriieee… Isssshh YoouRrr cAArrr AlWaYsss bEEnnn pAinTeD WhItE??” He slurred as he rubbed his finger into the metal surface while I searched for the keys in my pocket.

“Always been that way,”

“ALwAyS????” He repeated with a high-pitched wispy voice.

I peered my eyes towards him desperate about his drunk talk

“.....always, Alphonse” I replied with a sigh as I pressed the open button for the car.

“We best not waste time, come now” I grabbed Alphonse by the arm and started to lead him to the passenger seat.

But instead of complying, Alphonse stuck his gloved palm all over my face and tried to push it away with force.

“I WANNA GO BACK DRINKIN, ADRIE!! GET THE FUCK AWAY FROM ME!! I’M *hic* nOt gOiNg HomE!” He yelled, trying his best to gather up the strength to free himself. But alas, he failed, but his tantrum is utterly resolute.

This is going to be a long night

My New Life As The Mafia Lord’s Wife
Oldest | Recent
Search
Your changes has been saved.
Action Required