Helen had been very brave. She and her parents had been captured in one of the Royal Raids just a week ago, and while most children (though at 13, she wouldn’t call herself a child!) would have broken down right away, Helen had stayed quiet and did as she was told. When two of the tall, armoured creatures - the synths- had charged into their hideaway and grabbed her, she hadn’t cried. She fought back as her parents had, even though she knew it was a hopeless fight. When the synths used their multi-guns and tased her mother, she hadn’t cried- she had simply fallen silent and stared at her mother's twitching form.

She had listened to her father when he told her to do as she was told. She had been silent as they were transported off her home planet with strong wires binding their wrists behind their backs. The whole time they were transported, and the whole time they were detained on King Decon’s mothership, they were guarded by these two synths who never removed the fearsome helmets that covered their entire head. The helmets made her think of insects since the eyes were large and bulged out, even though they were narrowed forward on sleek black helmets to give them a dangerous, sinister look. Their folded wings on their backs reminded her of bats.

Like ants, she thought. Like evil, winged ants. Large, evil winged ants with multi-guns tased her mother and took her from her home planet. She wondered if she’d be afraid of ants when she got back home.

The question of if she would ever go back home never crossed her mind.

It was only now, as they waited in line to be presented to King Decon, that her bravery started to waver. She had never seen King Decon before; nobody saw King Decon in person unless they were in real trouble. He had a whole galaxy to rule over and didn’t have time to deal with the smaller problems of each planet. When they were brought into his throne room she knew that she was — as her father would say — in the shit.

The throne room was a wide, circular room. A window wrapped around the walls and looked out into the vast expanse of space- it was much emptier than Helen had thought it would be. In the distance, she could see a planet, but she didn’t know if it was her home or not. A row of the synths stood perfectly spaced out around the perimeter of the room, unmoving. If Helen hadn’t known better she’d have thought that they were decorations. But no, the synths always stood like that unless they were doing something.

Flesh and tech merged to create the form of King Decon. He was taller than anyone else she had ever seen, even while he was sitting. Wires and tubes which looked something like muscles ran in and out of his arms, pumping blood and other liquids all around his body. His face was a sculpted mask, a perfect, indifferent visage with holes for his bright blue eyes that peered down at her, unblinking. Even from where she was, she could see the clear dome that housed his brain. She had been taught in school — before her parents had taken her out — that he showed off his brain because the mind was the person, and while the rest of the body could be modified and stripped away, the mind was the only thing that could not be replaced. 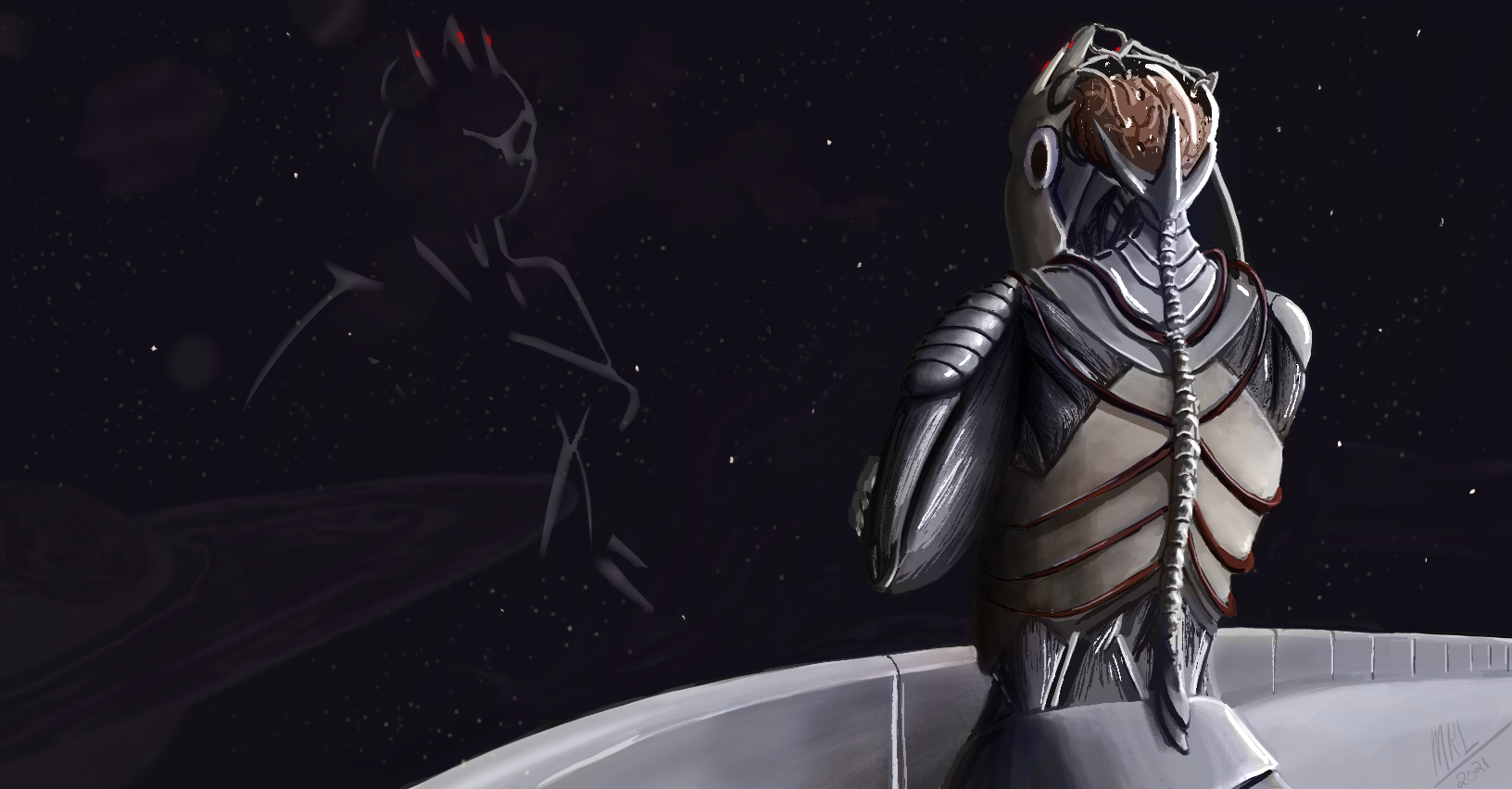 How long had he been alive? She remembered being taught that he was over 10000 years old, but her parents didn't believe that. Her parents doubted a lot of things that she had been taught in school.

He caught her eye, and she looked down immediately as she started shaking. If you were brought to stand before King Decon, you had either done something very very good, or very very bad. The way she and her family had been treated, she didn’t think they had done anything very very good.

A man from her home planet stepped forward; She had seen him on the news - he was the planet’s Minister of Security. He was a larger, fatter man who was wearing very fine clothes that didn’t seem to fit him quite right. He also had a strange kind of green wig on his head.

Noss. That was his name. She remembered because it made her think of moss, and she used to imagine his head was a big, wet rock that grew moss on top.

“My Lord, King Decon.” he said as he gave as deep of a bow as he could manage, “I have brought you the leaders of Arkane’s resistance.”

“T-this family is the knot of the resistance, as it were.” Noss said, taking a sudden step back, “With them gone, any opposition to you on my planet will die.” He looked up, not meeting King Decon’s eyes but instead looking at his silver-booted feet, “I hope this proves my loyalty to you, my king.”

“This will suffice.” King Decon said, “Provided I do not see any more opposition from your planet, I’ll consider lifting the sanctions on Arkane after one universal cycle.”

Noss squinted in concentration as he did the calculations in his head, “But... But King Decon, that’s three planetary years for us!”

“Is that a problem?” King Decon said. His voice was soft and dangerous, and all at once, the room seemed so much quieter than it had been just a moment before.

“Very good.” He turned his eyes to Helen’s parents. “You have been found guilty of conspiracy against the leadership of your planet, attempted assassination, slander against my rule, and destruction of my property. How do you plead?”

Helen’s father looked up, his eyes narrowed in defiance. “It’s not slander if it’s the truth.” He spat.

“Attempted assassination?” Noss said, seemingly unable to hold his tongue, “But, they succeeded! The last two Royal Guards sent to Arkane were killed in the explosion!”

“Ah. That.” King Decon leaned back in his throne, “No no, they were synths. It’s the destruction of property.” He looked back at Helen’s father, “From your response, I take it you have no defence.”

“We have done nothing wrong.” He said, “We’ve stood up against a tyrant. History will -“

“History will forget you, I guarantee it.” He waved at one of the synths by his side, “Go ahead, execute them.”

Helen froze. Execute? No. She was still thinking that it had to be a bad dream or a joke, or that at least someone was going to save them when in a fluid, sudden movement the synth came forward, grabbed her father, and stuck a long, narrow needle into the back of his head. Her father twitched for a moment, then fell lifeless to the ground.

He didn't even have a chance to scream.

She still thought that someone would help them, that King Decon would stop this when the synth did the same to her mother. They grabbed Helen's mother, and the last thing she said before they needle drove into the back of her head was, “She didn’t do anything! Please! Let her go!”

The synth finally approached Helen. Helen’s bravery and hope fled her at that moment and she fell to her knees and started bawling. She pushed herself away from the synth and looked up at the big, narrowed eyes on the helmet.

It was just for a moment. A slight hesitation. They were reaching out for her, to grab her and finish their job when their hand stopped in mid-air. They stared at her, silent.

She was so close to the synth that in this lighting she could almost see past the big, scary-looking eyes on the helmet. She could just about see large, round eyes hidden behind the lenses. Big, confused eyes, and hairless brows furrowed in thought.

“Is there a problem?” came King Decon’s strong, quiet voice.

Fear. She could definitely see fear in the synth’s eyes behind that mask. They didn’t move as they spoke. She realized that she had never heard a synth speak before and their voice sounded odd to her; like it was two or three voices speaking from the same mouth.

“King Decon, is this necessary?”

Then they jolted. Helen hadn’t seen King Decon rise from his throne- she didn’t think anyone had - he had moved faster than she could have imagined, and grabbed the synth by the helmet. He cracked a piece off the back of the helmet and then sank their fingers into the newly exposed flesh. There was a spray of blue blood as the synth spasmed and fell limp. King Decon dropped the synth on the floor before Helen then turned and walked back to his throne.

Noss, still standing to the side, took a step backwards. The colour had drained from his face, and he looked like he might throw up. “King Decon, I-” They stopped as King Decon turned to look at them.

King Decon gestured to the limp body of the now-dead synth, “It questioned me.” He said, with an almost careless tone “I do not need a tool that questions orders.”

He gestured to another synth which was standing nearby, “You- get rid of that thing.” He said. The synth stepped forward, picked up the limp body from before Helen, ignoring the pool of blood that had formed beneath it. Without being prompted, another synth rushed forward and cleaned up the blood.

In moments it was as though that previous synth had never been there, and Helen was left only with the memory of their confused eyes, their hesitation, and the way their body twitched before they died.

King Decon gestured to another synth, “Finish up.” He ordered.