Hi guys! Emperor93 here!
I thank YXXREM for the illustration he has drawn for this chapter. To see more of his works click on his name.

Dawn had just risen. After some light exercise and a hearty breakfast, I took a wicker basket, and like every morning, I headed to the nearby forest, looking for ingredients like mushrooms, herbs, berries, and the like. It's a habit I've got into, and one of the few times I can relax.

The sky had taken on a light shade of pink that was getting warmer, and in the distance, I saw black clouds. I heard a flock of birds take flight. They're flying low... it could rain.

Arriving in the undergrowth I found a large quantity of aromatic and medicinal herbs, with some mushrooms now and then. How to recognize the various plants was taught to me by the herbalist of the village as I was always looking for new flavors, but if you cannot distinguish a poisonous plant from one that is not... well, it could be problematic.

I don't know how long it had been, but I was in the forest. I have never relied on divination except to predict the immediate future of a fight, but maybe this time I should have. Under a tree, I found what looked like a large black baroque armor, with silver decorations, but some red spots and lines made no sense. Although surprised, I walked over and immediately began to smell a ferrous smell coming from the armor, the smell of blood. Probably, the wearer is injured.

I approached quickly and saw that there was a laceration in the chest and burns everywhere, it was clear that the owner had lost a lot of blood. I grabbed the black helmet and lifted it... long white hair fell from the helmet and the face of a beautiful woman who appeared to be between her twenties and thirties showed up: white skin, thin lips, long eyelashes, a nose small but suitable for that face with delicate features, slightly pointed ears and two horns that resembled those of bulls. I was enthralled... Sarity has a sensual charm, but the woman in front of me has something that I have rarely seen: pure beauty. My heart leaped just to see her.

I immediately composed myself and checked if she was still alive... she was breathing, but given the gashes in the armor, it was clear that her body was not in good shape. I don't know when she fell like this, but for sure, this woman is a tough nut to crack. I had to do something. I touched her cheek and concentrating, started using my powers on her. I made my will and vitality flow into the woman's flesh, to give her a rapid tissue regeneration. It took a while before the skin began to have a rosy color and consequently, also the breathing began to become more stable and deep. For a moment I saw her open her eyes slightly, noticing her pupils as red as rubies. 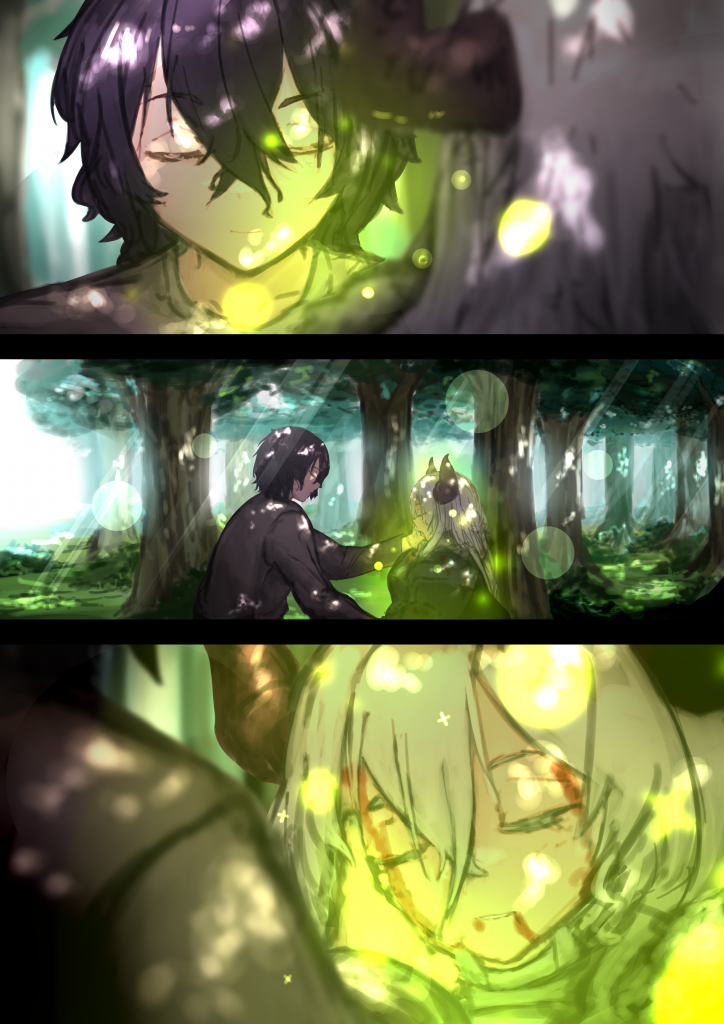 “Hey, don't move and rest. I promise I'll get you back on track."

She didn't answer, but she seemed to have heard me as she closed her eyes again and fell into a deep sleep.

I continued the treatment for a long time, but I did not know if her wounds had to restore enough to be able to say she was healed. I'm sorry, but there is no other way. Apologizing, I started taking off her armor and had another surprise. The woman's body is much less impressive than the armor and she too has large breasts but was still in balance with her graceful body. The wounds she had healed just enough for them to stop bleeding. I breathed a sigh of relief.

"However, I certainly can't leave her here."

I only wanted the happiness of my similar. Why did it turn out like this? Why did they attack us without warning? We did nothing to deserve what we suffered. We have persevered for 15 long years and have also managed to turn the tables around. I was hoping to be able to get a longed-for peace, but then he came... along with his companions.

All our efforts, everything we have built, wiped out in a few years. Even I was defeated and thought I would die in that cold room.

It was dark. I don't know how long it had been, but from a painful heat, I started to feel cold. I often wondered, Is this the place we go to once we're dead? Then I felt warmth. It was gentle, enveloping, like a mother's embrace. It gave me a little strength and I opened my eyes slightly and saw the blurred figure of a person

“Hey, don't move and rest. I promise I'll get you back on track."

He told me this. I heard in his voice that he was worried and hasty... yet, for some reason, the words were reassuring. I closed my eyes again and went back to dreaming. That warmth, so comforting, I felt it again.

When I opened my eyes again, there was a wooden ceiling and the sound of rain pounding. The place was bare, with a few chairs, a table, a kitchen, and a bag hanging from the ceiling. My senses were returning and at that moment I felt that my hand was held by something warm. I looked towards it and saw a boy sleeping on his knees beside the bed, his tousled hair seemed to have the color of the night, his face was square but he looked kind. Most importantly, he was a human.

I was surprised to find that one of our enemies was holding my hand. I wanted to get away quickly, but my body was weak and I couldn't move it the way I wanted.

Sensing the movement of my fingers, the boy woke up, and seeing me awake with his gray eyes, he smiled looking at me gently.

"Finally, you have recovered." he said in a relieved tone.

He stood up and stretched as he yawned. Once finished, he walked over and put his hand on my forehead, then took my wrist.

“Your heartbeat is regular and you have no fever. I would say that you have recovered well. Can you get up?"

Not answering I tried, but my body didn't want to listen to me and after I got up a little, the boy started rubbing his chin as if he were thinking. He went to the kitchen and taking a knife, he began to move his hands putting everything he was prepared in a pot he had filled with water. After a short time, he filled a bowl with it, took a chair, and stood next to me again. He filled the spoon he had with him and tasted the first bite, swallowing it.

"As you can see it, is not poisoned." he started looking into my eyes, then refilled the spoon and brought it close to my lips "Drink it, it will help you recover."

Although reluctant, despite having given me proof of the authenticity of the soup, I brought my lips to the spoon and slowly began to drink it. It was light and tasty, but the most incredible thing was another: for every spoon I swallowed, my body felt invigorated, as if it were sweeping away the fatigue in my whole body. It took a few sips that I managed to lift myself.

"Great. It seems that the Shimo-Tsuto is a lifesaver." the boy said handing me a bowl and spoon.

Under what was ultimately broth, there were some very clear grains. I dipped the spoon down taking those too and when I put them in my mouth, I was surprised. It was rice, steeped in the flavor of the broth, and very soft. With each bite, not only was I able to recover my strength, but my body reacted satisfied to the consistency of the rice, awakening a pang of hunger for who knows how long.

"Another!" I said giving him the empty bowl, the boy smiled

"Right away!" he said, taking the plate.

This time, I smelled a slight smell of cooked and aromatic meat. When he returned, there was a red soup in the bowl, with balls inside. I tasted... the taste of the chicken caught me off guard and the acidity of the tomato enveloped it gently; like the previous dish, the more I ate it, the more I felt my body recover energy. Did he use the same broth?

When asked, I turned to him and nodded. He took the empty bowl, the spoon and put them in a tub, and began to wash them.

Now that I was satisfied and full of strength thanks to that broth... I noticed. That boy, he has no presence. Or rather, I can't feel mana coming from him. How is it possible? Even though it intrigued me, this was no time to worry about that. He is a human. His race destroyed our dream. He is an enemy. Yet, why...

At that question, the boy looked up in surprise. He put aside the dishes he had washed and looked at me

"Why shouldn't I?" he asked as he dried his hands

“I am a demon. Our races are enemies. Why did you help me? Why didn't you kill me?"

"Because in front of me was a woman in need."

"So what?" he asked with an uncertain expression “I don't make so many distinctions between races. If someone needs a hand, why should I ignore them?"

“It is true that our races are fighting each other. But you haven't done anything to make me kill you... at least, not to me. Why should I treat you like an enemy just because you are a demon? I decide who is my enemy or not."

As absurd as it was, his words were sincere. He seemed to be speaking from the heart. He was the first human... to talk to me like that. Everyone I have met so far was planning to kill me without thinking twice. But for him... What a strange human. But even so, I couldn't trust him.

“By the way, I haven't introduced myself yet. I am Graeval. What's your name?"

I didn't know at that moment that my destiny and Graeval's would be so deeply intertwined.

The Guardian Chef
Oldest | Recent
Search
Your changes has been saved.
Action Required