"Did you get all that?" asked the Guildmaster. She then let out a very big sigh.

The Guildmaster had just finished explaining how everything would go on. Simply put, she wanted Aumo and LisiA to sign up as adventurers for the guild and their benefit.

In the case of a monster attack, the weapons mounted on the walls of the city should be able to hold off the attacks, but if enough monsters attacked, the weapons would run out of ammunition.

In order to make sure there is no friendly fire, adventurers are to stay in the city until the weapons run out of ammo. Once the weapons are out, the adventurers would have to deal with the remaining monsters, or at least attempt to.

Yuhsar is a commerce city, which means that there are many merchants moving about in and out of the city. A monster attack means that a lockdown would be initiated. If any merchants are lost in the process, it would be a big issue.

"How likely would it be for the weapons to run out?" asked Aumo.

"Very unlikely," replied Ray, all guards are trained to use these weapons, and they naturally need to know where they are stored, and how much ammo they have.

There are specified storage rooms filled with ammunition, which meant that the weapons would hold off monsters for a long time.

"We even have one of the best models of the weapons," added Guardon, "One or two shots would take out an orc. We don't think these can take down dragons though."

Dragon scales are extremely tough, able to guard against physical and magical attacks. As powerful as the weapons may be, they shot physical projectiles which are less destructive than more powerful forms of magic.

"They're still plenty powerful and that's all that matters," said the Guildmaster, "Anyway, if you lot are done with what you need to do here, shoo. I need to finish my work."

"Well, that's how Fedi is, let's leave," said Guardon, as he guided the four out of the office.

When they reached the lobby, Aumo asked, "You say her name is Fedi?"

"Yes, everyone knows her around these parts," said Guardon, "the Guildmaster who always looks tired, thinks everything is bothersome, but does her work quickly and well."

"I sometimes wonder why she hasn't quit her job," said Stella, "She sleeps so much."

"No, I wouldn't want this guy as a brother even after a thousand years!" said Stella.

"I wouldn't want a cheeky gorilla of a little girl as a sister either," returned Ray.

"Who's a gorilla!" exclaimed Stella.

"You…" Ray got cut off as Stella punched him in the gut and sent him flying into a table.

The people in the guild turned to look at the commotion for a moment, then went back to what they were doing.

"Sorry, these two fight way too much. Let us move on and register you two as adventurers," said Guardon to LisiA and Aumo.

The three left Ray and Stella be, and eventually an automaton grabbed the two by the collar and dragged them out of the guild. On its back was a sign "Ray and Stella removal service".

Aumo and LisiA registered as adventurers, signed a contract, and got an explanation on what adventurers did.

The guild didn't have a ranking system, a registered adventurer is simply a member of the guild. Anyone could take on any quest, but whatever happens to them is entirely on them as per the contract.

Recently, a new tool that can teleport people out of danger was developed. The guild provides all adventurers with one, but every use after the first one requires a refill which costs money. It wasn't cheap either, and was a reminder that choosing a quest that you can't complete comes with consequences.

While adventurers aren't ranked, the quests are given difficulty levels ranging between 1 and 10. Anything beyond 7 has yet to be given out, but 7 was already a really hard quest that many don't dare to take.

"Keep in mind that the difficulty is only a rough estimate, and could be higher or lower," said the receptionist who registered Aumo and LisiA, "The margin of error is still okay, at around 0.7. It's also not a flat rate of difficulty increase but an exponential increase."

"Okay," said Aumo, "Is there anything else?"

"Nope. Stay safe and know your limits!" replied the receptionist.

"Thank you," said LisiA, and she left the reception desk with Aumo.

All this time, LisiA had actually been storing the cores in a dimensional space. Opening the space required mana, but the inside had seemingly infinite space. It doesn't use mana to keep things in there as it appears to connect to somewhere, and the wormhole formed to connect to said place is the only thing that requires mana.

"To sell things, go to the right half of the reception desk," said Guardon.

The reception desk was rather big, and the registering was done on the left half, along with taking quests and completing quests. The right half was for selling materials, and also had a big doorway behind it.

As most of the adventurers are still out doing their quests during this time of the day, there were only a few people lined up to sell materials.

LisiA and Aumo went to go line up to sell materials, and it didn’t take long until it was their turn.

“Welcome to the material selling section,” greeted the receptionist, “What do you like us to buy?”

“How much would you pay for these cores?” LisiA asked, as she takes out the cores from her storage, “They come from Forest Wolves and Orcs.”

“Hold on, let me calculate the price,” said the receptionist.

After a short while, the receptionist came back with the price which was around 5 silver coins.

“It seems that the currency has a new design but it works the same way,” said Aumo after walking away from the reception desk.

"Now, I hope you two aren't going to go adventuring in the clothes you two are wearing," said Guardon as he watched the two come back.

Aumo and LisiA were both very lightly dressed, with Aumo wearing just an oversized shirt which was tied up around her belly and shorts, and LisiA wearing a blouse under an unbuttoned blazer along with a skirt.

"I can't make any promises," said LisiA. The two did after all make it through the forest with clothes like this after all.

"Still, you should get armor," said Guardon, "It's really dangerous out there."

Androids don’t wear armor, and this just confirmed that Aumo and LisiA didn’t look like androids to anyone.

A single comment was all I had to work with for the suggestion on the cover. There’s nothing wrong with it of course, it’s not like there’s many people reading this series anyway. With that said, here’s the rough sketch that I made, not colored of course. It doesn’t look like something that would fit being a cover(I named it "Cover I Think.jpg" after all), so I will definitely add more things, color it, and refine it. I might even redraw it if I ever need to. What should I add to it? 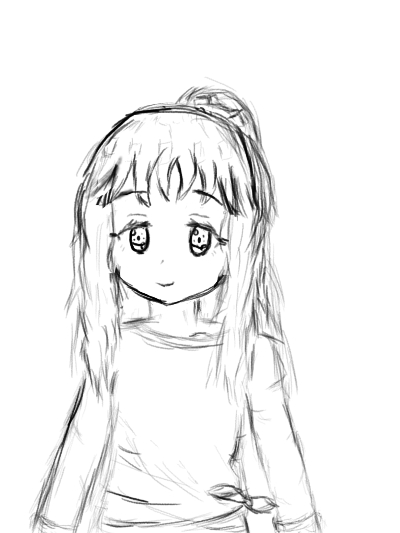