Hey, hi, hello! Thanks for swinging by, and welcome to my first fanfic!

I decided to write about one of my favorite Pokémon games of all time, Pokemon Colosseum. I hope you'll enjoy taking this ride with me as I retell this fantastic story. As this is my first attempt at any kind of novelization, helpful feedback and critiques are more than welcome!

Please be advised that this story will have minor swearing, scenes of violence and death, and depictions of both Pokemon and child abuse. If any of these are sensitive topics for you, please use your discretion.

Last but not least, obvious disclaimer is obvious: I do not own Pokémon, but I do own my OCs. 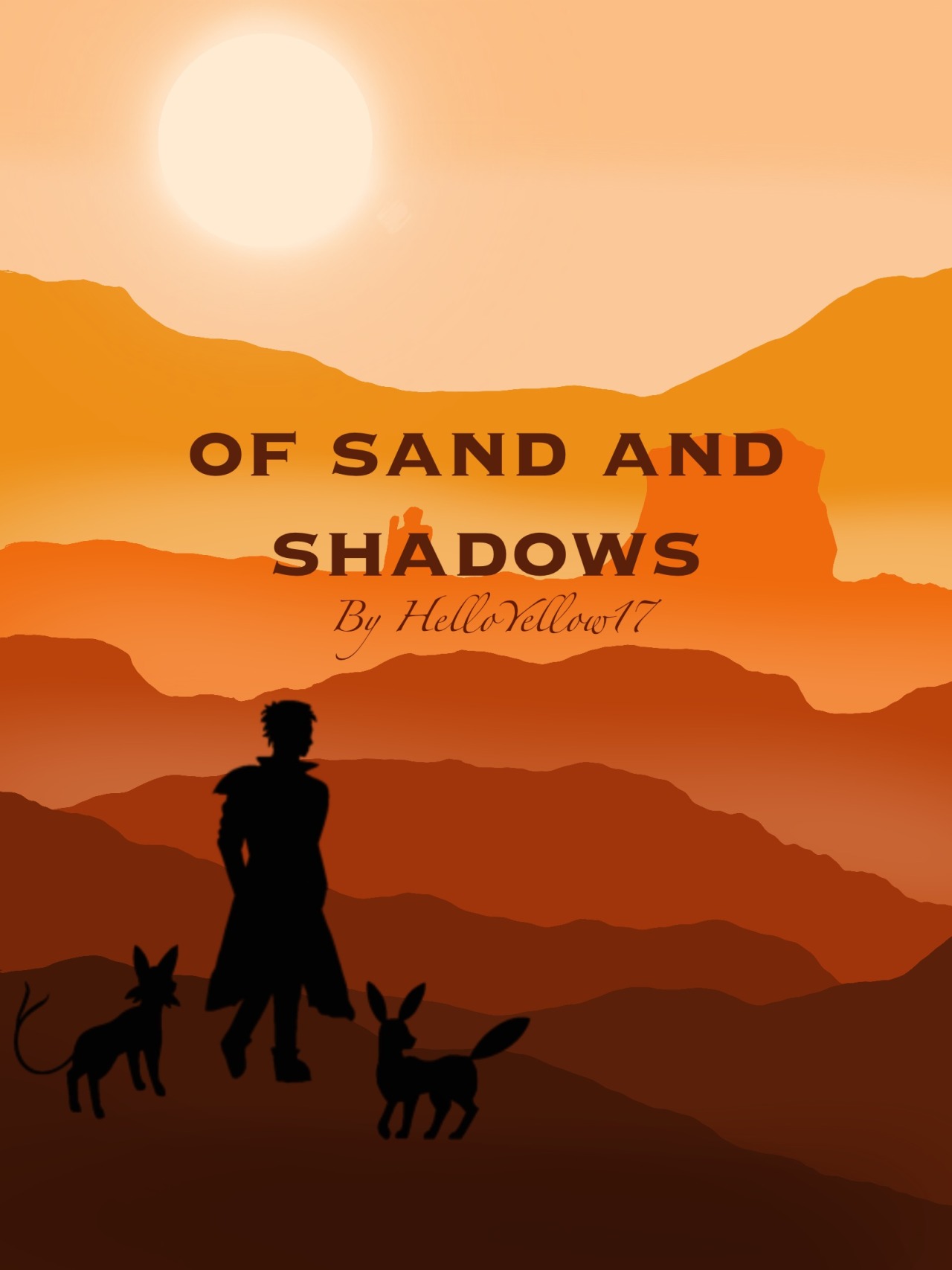 Some would say that "barren" and "Orre" were the same thing.

It would only take a brief view of the landscape to see why. The desert region sprawled for miles, seemingly without end, with little to no life in sight. The sun blazed down mercilessly on the copper sands as the winds whistled aimlessly across them. The only sign of life was the occasional tumbleweed that rolled lazily on by.

One thing disrupted the flat expanse: a series of cliffs, tucked away from the sands, which formed a narrow canyon. At this canyon's mouth sat a large building—or, at least, something that barely qualified as one. The structure, though massive, almost looked more like a pile of poorly assembled pipes and scrap metal than an actual building. Like its surroundings, this, too, was a quiet and still place, with only the howling canyon winds to break the silence.

It wouldn't be quiet for long.

An earth-rending explosion shattered the stillness. Flames burst from a section of the dilapidated building, followed shortly by screams. People in dark uniforms emerged from the blazing building, their faces masks of panic and confusion. Among the chaos, no one seemed to notice one person in particular dashing away from the scene, with two Pokémon sprinting at his side.

"Go, go, GO!" the young man shouted at his companions as he raced for a beat-up motorcycle parked on the desert sand. He sprang nimbly onto the seat, revved the engine, and glanced quickly into the sidecar, where his two partners should have been safely seated—only to find his Umbreon watching him tersely.

He glanced over his shoulder and found his Espeon a few yards away, yipping loudly at the people fleeing the burning building, tail waving triumphantly in the air. He didn't speak Pokémon, but the runaway figured if he did, he would be hearing a choice selection of colorful insults.

"Espi-esp, esp, esp! Es-SPI!?" The Espeon's barks cut short in a yap of surprise as his trainer hauled him off his feet and shoved him under one arm. He sprinted back to the motorcycle and dumped the creature rather unceremoniously into the sidecar next to his brother, ignoring the Pokémon's cries of indignation.

A terrifying roar of rage sounded from behind the trio, and the trainer turned his head to see his least favorite person in the world: a massive, hulking man with no hair (though he made up for that with an impressive beard and eyebrows), charging straight toward them, his face red and contorted with unfathomable fury. Several others, clad in dark clothing like the rest, flanked him on either side.

Anger and bitter satisfaction alike swelled inside the trainer's chest. He faced his now-former boss with a growl.

The man roared again, this time too incensed to form any words. He barreled toward the trainer and his Pokémon with a murderous expression, but this wasn't Wes' main cause of concern: a flash of light emerged from a Pokéball at the man's belt and took the shape of a metallic bird. The Pokémon spread its wings, emitted a blood-curdling screech, and took to the sky.

It was time to go.

The motorcycle engine started with a roar, and in one smooth motion, Wes swept astride the motorcycle. He raised his left arm high above his head, sunlight glinting off a strange metal contraption that encased it. Holding a small remote in his hand, he looked his boss dead in the eye, smirked, and pressed the button.

The second explosion was, if possible, even more impressive than the first, and nearly knocked every bystander off their feet. The giant man's bellows of rage were drowned out by a monstrous roar as the motorcycle kicked into gear. Its rider slammed on the gas and he launched the bike forward, narrowly missing a dive-bomb from the enraged Skarmory, and soon the crowd of people were left in the dust.

Skarmory flew overhead, shrieking horribly as it gave chase. Wes shouted a command to his Pokémon, but he needn't have bothered—his Espeon had already charged up a Psybeam and fired it at his foe.

A metallic clang followed by another agonized screech told Wes that the Psybeam hit its mark. He glanced over his shoulder to see the bird tumbling out of the sky and down to the sands below.

He laughed and let out a whoop of celebration, his companions joining in with triumphant cries, and the trio plowed through the desert until the base and its inhabitants were long out of sight.

The sun was sinking below the horizon and the temperatures had started to drop by the time their destination came into view: an old, rusty, seemingly abandoned train car. Near the door, a wooden sign swung lazily in the desert breeze. On its face, it read: OUTSKIRT STAND. The crusty thing had been converted into a diner, and though it wasn't much to look at, it was a place Wes was familiar with. Most importantly, it was a place where they would be safe for the night.

The motorcycle puttered to a halt as Wes pulled up to the establishment. Dim lights shone through the train car windows as old Western music hummed from an outdoor speaker. Wes stood and stretched his limbs—speeding through the desert for hours did his joints no favors—as his Pokémon followed suit, leaping nimbly from the vehicle and stretching their lithe bodies.

"All right, who's hungry?" He pushed his mirrored goggles off his face and into his sandy hair, revealing a pair of golden-colored eyes, and grinned at the two Eeveelutions. His Umbreon gave a yip of hearty affirmation. His Espeon, on the other hand, squinted at him, then sniffed airily and turned his head away from his trainer.

Wes heaved a weary sigh. He crouched down in front of his Espeon to be eye level with him despite the fact that the Pokémon was pointedly avoiding his gaze. "Neo. Is this about me manhandling you back there?"

The Pokémon, Neo, irritably flicked his tail in response.

Another sigh. "Look, I'm sorry. But there's a time and a place for gloating over a victory, and doing so while escaping from an exploding building is not it."

Neo flicked his ears back and looked at the ground, looking slightly abashed. "Esp." He then looked back up at his trainer with a small glare. "Espi-esp!"

"I know, I shouldn't have been so rough. I'm sorry, bud, really. How can I make it up to you?" Wes glanced at the Outskirt Stand, then back at his Pokémon with a sly grin. "How about I get you a whole plate of bacon and we call it even. Truce?"

Neo's eyes grew wide and he leaped to his feet. "Es-PI!" He waved his tail excitedly in the air, all injuries to his pride forgotten.

"Bri!" There was a reproachful bark from the Umbreon.

Wes rolled his eyes, but was still grinning despite himself. "Fine, fine, bacon for everybody. Don't get used to it though, you hear? This is a one-time deal."

He wasn't sure if they heard the last line, as they were already bounding excitedly to the entrance of the train car. Wes snorted in exasperated amusement, then followed his companions into the warmth of the diner.

Muffled cries, the screams of Pokémon, a child sobbing quietly in a corner - images and sounds flickered and blurred together, one coming right after the other as if in a disorganized photo reel.

A flicker, and there was a dark room, in which a child was sobbing over the limp form of a Pokémon's body. He looked up, tear-stained face twisted with anger. "This is YOUR FAULT!" he screamed.

The scene dissolved into darkness, and a man's husky, menacing voice spoke in a snarl. "It's time you learned this lesson, boy."

Another shift, another dark room littered with Pokémon lying ominously still, limbs splayed out in awkward angles—and there was another voice, a kinder voice, accompanied by a sad, tired smile.

He sat bolt upright with a gasp, drenched in sweat and shivering. Breathing heavily, he glanced around the room. It took a moment to remember where he was: Outskirt Stand. The diner cellar. A night's stay in the musty place, where he and his Pokémon would be hidden from prying eyes.

"Dammit—" He buried his face in his trembling hands. Again, he thought shakily. Again. When in Arceus' name will they stop?

He felt a gentle nudge at his arm, and raised his head to see his Umbreon looking up at him with wide, concerned eyes. "Umbri?" The markings on his coat glowed softly, gently illuminating the dark, dusty cellar.

Wes forced a feeble smile and placed a hand on the sleek black head. "I'm okay, Novo. Just some more bad dreams, is all." Beside him, Neo stirred and stretched out his legs before relaxing back into sleep with a gentle purr.

Novo, unconvinced, bunted into his arm again with his head. He placed a paw on his trainer's lap, giving him a stern stare.

"I know it'll help, bud, but I've got to be able to sleep on my own sometime." Wes closed his eyes briefly. He was exhausted, and yet returning to sleep would undoubtedly mean more nightmares, more voices, more things he'd rather forget...he opened his eyes again and looked at his Umbreon. "All right...just one more night," he said wearily.

Novo purred in response and brushed his face against Wes' shoulder. The two sat in silence for a moment, Novo leaning into him as Wes stroked the Umbreon's sleek black fur. He paused at Novo's left side, fingers brushing at old scars that he knew were still there, despite the fact that they were nearly invisible under the dark coat.

More memories flashed through Wes' mind, and he couldn't suppress the shiver that followed. Novo, sensing his trainer's distress, chirped and brushed against him again. Wes sighed and finally laid back down in his sleeping bag, closing his eyes. His Umbreon touched his nose to his forehead and purred gently, using Hypnosis.

Just before drifting off to a dreamless sleep, Wes had one last coherent thought.

The sooner we leave this region, the better.

Pokémon: Of Sand and Shadows
Oldest | Recent
Search
Your changes has been saved.
Action Required