Chapter 21: Going back to Balroc town

After defeating Alyem the surrounding crowd went silent for some seconds before starting clapping slowly.

What a lame clapping...

They probably have mixed feelings about me winning, they just were cheering for me because they thought I could lose either way. But when they realized that one of their race lost to a puny human, their joking attitude ended.

At least they are clapping out of courtesy...

I looked back at the arena and I saw Alyem lying on the floor with his eyes closed, probably thinking about what he did wrong in this fight.

I extended my hand in his direction and untied him from the root's grip with my magic.

Just that small use of Nature control magic to tie him and untie him consumed 5 mana?

I hope I can find fallen stars soon to create the mana crystal and expand my current mana pool or else I'll have to fight giant monsters and demonic beasts with just 40 of mana...

Does the fallen stars even exist in this world? They better exist or else I will be trapped with just this small mana pool at my disposal for all eternity.

Anyways, going back to Alyem...

He stood up from the ground and shook up the dust that appeared on his clothes before glancing at me with a smile on his face and offering me a handshake.

We shook hands respectfully, and then he put the bow with the other weapons once again.

"What will you do now sir Aspen? Maybe I can show you around if you want to explore this city" He said while leaning excessively close to me.

"No, I need to go back to the human territory and tell them everything about the problems we faced on our trip. Maybe I can come back later but for now I don't have time"

As much as I wanted to continue visiting this city and exploring its culture, I think it could be better if I went back and reported everything that happened during that trip. Something about those guys that threw the slimes at us gives me a bad feeling.

Probably the fact that they tried to kill us without reason...

Or the fact that they dressed like evil satanic cultists...

I remember now! Those clothes they were wearing looked very similar to the robes the cultists wore in the game.

Whatever they are doing I just hope I can prevent it before happening.

It's not like I will have to fight the real Cthulhu or moon lord with just silver armor and a silver sword...

It took me a while to go back into the human territory. Probably due to the fact that I just traveled by walking this whole time.

I should probably try to get a mount in the future, walking is too slow for trips like this.

I wonder if a normal horse is considered as a mount by the system...?

While my mind wandered free on the possibilities this system gave me I felt the temperature on the environment fall.

The mountains soon reached my sight and the snow soon started covering the environment.

The incredible forest full of vitality and animals soon became a sad field empty of any life and covered in a thick layer of snow.

While walking through the mountains I could see some Ice slimes jumping around without a care around the snow field.

Luckily this guys seemed to be pacific, unlike those I fought a month back...

I opened the map that registered the whole human territory and tried to know where the hell was I...

After some moments although I couldn't discover where exactly I was, I managed to know in which area I probably was.

"Now I have to go east huh?" I said while glancing at the barely visible sun on the sky.

Why the hell haven't they created the compass yet?!

I'm tired of burning my eyes while looking at the sun trying to know where the hell is each side.

When I managed to find the east I noticed that in the distance although barely visible there was the beginning of a green forest that continued for kilometers into the horizon.

More walking then it is...

Although my resistance was twice as large as the strongest human, it didn't mean that I could travel through the whole forest for 3 f*cking days straight without getting tired!

Although I almost got lost once again, I managed to find a village that gave me directions to Balroc city...

Anyways, currently I was supposed to be only a few kilometers away from Balroc city.

So my trip was finally ending.

While having this deep conversation with Neo the memories of these past days came back to my memory.

Neo stood with me the whole trip, flying around me and sometimes flying up to the sky and showing me the way to the nearest village.

Sometimes singing along with me the songs that I remembered from my past world.

And sometimes even dancing along with the surrounding trees at the melody of the song.

Although he had the impulse to attack the nearby slimes, He was a good partner to have during this trip.

*Chiiiiiirp!!!* Neo says before he flies at full speed into a certain direction.

I immediately grabbed Neo and hid behind a nearby tree at full speed.

"Well, isn't that curious, I swear that I just heard another human voice from here..." A voice came from deep inside the forest

There stood an enormous goblin of at least 10 feet, wearing a tick steel armor and carrying a heavy Iron broadsword on his back

His musculature surpassed by far the one of the other normal goblins, giving the impression that it could just crack a tree with just his brute strength...

The smell of death emanated from his armor and his fists were covered in blood while at the same time you could see a bit of steam coming out of his mouth.

That sh*t is terrorific.

I looked at his eyes for a second and its stats showed to me.

But before I could even try to get up and escape a horrible sound came from behind me.

I slowly turned around to look behind me and saw the Warrior goblin smiling from ear to ear while holding into his hand a whole uprooted tree...

Yesterday I got kidnapped by my parents to go on a family trip, so I couldn't write a chapter.

Also, you might have noticed but the cover it's finished!

Here's a bigger picture, so you can see it better

That's all for today guys.

PD: I discovered that the goblin tinkerer actually has ears! 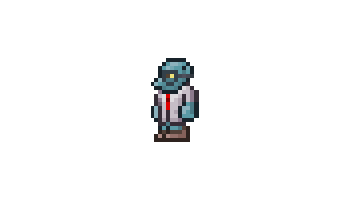 I always thought he had just a round head with no ears.

But now that I pay attention, it actually has ears :O

Am I the Player? Living in Terraria as the...
Oldest | Recent
Search
Your changes has been saved.
Action Required