[Well well well.] The ancient voice said as soon as they appeared within a hall of ice.

[Welcome back. Are you finally ready for the next trial?]

Igris Neihime, Claire's ghost-mentor, as dead as dead people were, sounded joyous. She couldn't actually see him, and had absolutely no idea what he looked like, but she always imagined him as a calm man with a perpetual thin smile—that is, until it broke down to speechlessness at her antics.

"Next trial? No, we're here for the rest of them." Claire said.

"Yes. We will be challenging trial four through ten now."

[Well I suppose I should expect as much from you. Certainly, I should have seen this coming. But do you really think my trials are so easy that you can get through seven of them in one sitting!?]

She could do nothing but be honest. She had rarely faced any troubles with his trials and even the one time when she fought the Psuedo-Phoenix, and was forced to use her most overpowered skill <Glacial World>, she hardly broke a sweat. Now, with her partner next to her, she doubted there was much that could extend both hers and Alicia's strength.

She heard a sigh fill her mind.

[Yet, heed my warning. The rest of the trials are insurmountable to normal humans. The dangers they posses could leave you broken at the least, and kill you at the worst. That was why the last test granted you a Dragon's Heart, to boost your stats for the coming trials.]

Claire raised a brow. For a moment, Igris thought she was reconsidering, and that she finally felt the weight of the trials, but his expectations were shattered once more.

The area descended into silence for a moment. Then a loud, very amplified, sigh fell as Igris Neihime decided to simply get things moving.

[This fourth, fifth, and sixth trials are conjoined and should take some time. They take place in an alternate dimension of mine and Fren's creation.] He muttered, voice questionably dry.

Claire readily accepted his words, however.

"That's not surprising. . .there's always some convoluted tests in an isekai."

From facing a hundred enemies, fighting yourself, to magic aptitude tests that always somehow fail when it comes to the protagonist. She had read it all. In fact, some may wonder if those types of tests would show up in this story.

Claire felt an illusionary smile tug at her mind.

[Trial Four: Find and tame my creation, Asta. Simply put, convince the poor boy to follow after you on your journey.

She raised a brow.

"Ymir? Really? First you gave me a sword named <Loki>, and now Ymir? Are you arbitrarily inserting Norse mythology everywhere?"

Clearly, her ghost-mentor had no idea what she was talking about.

[Well then, I suppose it's time I wish you two luck. Now, make sure you retrieve Asta before facing Jotunn. . .or you will die.]

With those flag-raising words, the Ice Queen and the Ancient Vampire disappeared from the space.

Snow blew across the land. The cold, stormy wind, chilled the air and froze any sprinkles of water that may have came from the frosted skies. Even as she squinted, all Claire saw was an endless white.

White snow. White clouds. White flakes. The land was bare but not empty. There were trees of ice, and squinted across horizons where castles, buildings, and mountains of white. All was white.

"Claire." Alicia spoke at her side, golden hair bellowing as she disregarded a temperature that would freeze anyone else.

There was another rumbling. This time, she really felt the entire dimension of ice shake.

And, then, it was a succession of rumblings that continued to grow louder and stronger.

"We have a troublesome opponent." Alicia, for the first time since Claire knew her, actually called a foe troublesome as her nose twitched.

Behind the flurrying snow, a mass rushed towards them, destroying everything in its way. Trees became icicles and the ground of snow flapped to its side.

When she finally saw it, she was in disbelief.

"That's not what I think it is, is it?" She asked herself.

"It is." Alicia readily answered.

It was a giant, sixty meters tall, running across a land of snow. It looked almost ridiculous. She would have laughed if not for the blistering speed it's sheer size did not dampen.

The wind exploded as a massive leg buried itself in snow.

There was a deafening silence, white falling, snow spiraling, as the two girls slowly raised their heads up.

They saw legs larger than buildings. A torso and arms thick with muscles and white fur. Then, finally, a large head that resembled the face of a blind, old man. Thick white beard, glowing white eyes, and horns. 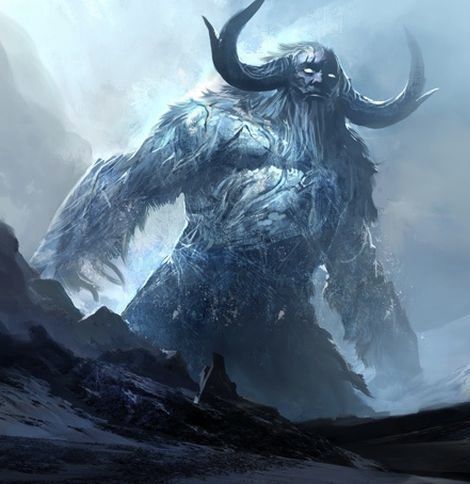 "Whom dares intrude upon my space of rest?" Its voice shook the air and its action flurried snow into the atmosphere. Every breath it took speed more coldness into the world.

By the look of its skill name alone, it was a creature as immune to ice as herself. No, in fact, it seemed that it was somehow more icy than her. She supposed she should have expected as much with a name like 'Ymir.'

"Do you lack tongues, humans?" It squinted down at them. "I may not have seen the likes of your kind in centuries, but has your species perhaps grown backward?"