'My skill plate has disappeared, replaced with an assimilation percentile at twenty-five percent,' Claire thought, supposing that that was her new barrier for growth.

She took a step forward and the ground frosted. At a glance, she assumed she was leaking mana and unconsciously weaving magic, but it took her only a moment later to realize it as a natural phenomenon of her new being. Similar to the Ice Giant King Alicia had battled, things froze when the world's mana reacted with her. It took a bit of effort to willingly control but she did, less she left ice wherever she walked. Claire smiled and reached a pale hand forward, to which her partner unhurriedly grasped.

"Cold," Alicia muttered as she stood up.

"Sorry," Claire said, lips parting to reveal a breath which chilled the air, "That part of me I can't control."

Much less a reaction, her body was simply naturally cold. Freezing, even. To her, it felt normal. If a regular person were to touch her, however, she had little thought that they would start to shake as a chill seeped into them. The Water Seed stated she could control the temperature of water, but right now, that merely advanced in the direction of the concept 'cold.' That of heat, Claire thought, was likely currently within the domain of the Fire Seed.

The vampire shook her head. "No. I like your coldness."

"That's because you're a bit masochistic," She said.

"No," Alicia smiled as a fang poked out, "It's also because I love you."

'Cute,' The ice queen thought as she touched her partner's visible face with her fingers and smiled. "That. I also know."

The mask was parted and their lips touched. Cold mingling with warmth.

[. . .] As they entered their own little world, Igris Neihime felt as if the two might have forgotten about his existence. So, he coughed. [Ahem.]

Claire perked her attention to him. "Hmm?"

[First I'll like to congratulate you on your evolution. It seems to me you became an elemental lord? Something akin to a spirit? Usually, one does not evolve to as much of a degree as you did after consuming a seed, but I suppose my choice was wise in selecting you as my guardian.]

A golden mass of what looked like strings or yarn floated down and touched Claire's head. They unwrapped themselves and covered her in a cocoon, spinning, and shrinking until they were gone and she stood there, dressed.

[I was unsure of what gender my guardian would be, so I had asked Lifrit, the previous wielder of the Seed of Eden, and a friend of mine to make elven clothing and accessories. Able to change their form to fit their wearer, and heal from damages, this should be suitable to your taste, I assume?]

The ice queen looked at her new attire. Boots of black with knee-length socks of the same color. A skirt of white that reached her pale thighs, and a shirt of black receding down her hips—into the skirt—topped with a white jacket with collars of black. Underneath it all, she could also feel underwear; bras, panties, the lot. 'They're probably white too,' she thought.

As for the accessories, it was merely black gloves that she assumed would allow her to touch others without chilling them, and a comfortable band of black leather that wrapped around her right thigh, visible just below her skirt.

[You can already infer what the gloves are for, but that band is just an unnecessary addition she made.] Igris coughed. [If you had been a boy, she said it would become a choker.]

Claire blinked her eyes, lifted her skirt slightly, and felt the band as Alicia watched her smooth thighs with rapt attention. Claire smirked at that, she wasn't shy before her lover.

"What strange tastes. . ." She muttered, "Though I don't particularly dislike it. You like it too, right, Alice?"

She showed off her thighs even more and ran a hand over them.

"It's enticing," The vampire said without a hint of shame. Clearly, she enjoyed what she was seeing.

Claire smiled and allowed her skirt to fall. "I thought as much."

Igris's voice came. [Lifrit was an especially. . .eccentric one. Most odd for an elf.]

"I can imagine," Claire said, then made a show of looking around, spinning in her new wear, skirt fluttering. "Is that all of your inheritance? Where's the isekai treasure room of ancient gold coins?"

[Gold coins? What are you talking about?] Igris scoffed. [Do you know how much it cost me to build this tower and all the treasures I handed out to you? All of my assets! I might have gotten help from friends but no one works for free, now. From gold, to trading my own works and skills, I was able to hamper out this much.]

Claire couldn't help but chuckle as she shrugged. "I was merely joking. This much is already enough, mentor of mine."

[Goodgrief. . .] Igris sighed. [As for my next words: Use the piece of eternal ice well. Since you have now inherited the Water Seed, anything deemed to have that element can be shaped by your hands, whether you have summoned it or not. But remain careful, for once an hour passes after shaping the eternal ice, it will forever remain in that which form you chose.]

[Good.] He continued. [You have now become my Guardian. Seek out the others, take from them that which you lack, then win this game of ours.]

Claire smiled in return. She expected that bit. It wasn't surprising if they could kill other seed holders and steal their powers for themselves. She shook her head.

"What a lyrical mass of bull," She said without a hint of acceptance, "I'll take what I must but I promise no more. I'll win this game as I see fit."

[I expected as much from you. . .] Igris Neihime sighed.

It seemed he had become all too used to her nature at this point. He was no longer shocked as he had been the first day she met him and flaunted her ice magic and scoffed at the Water Seed with little worry. No one could blame him.

[Then, this is it.] He said. [It was a short time in my long years, but having finally found someone more than suitable to inherit all that I own, I count myself lucky and content.]

Claire nodded and she felt the familiar sensation akin to a smile directed at her.

[Goodbye, Guardian of the Water Seed.]

With those words in parting, his voice disappeared forever. Claire remained where she was and looked at the grand hall where only a single crystal ball floated. For a reason or another, it felt more hollow. Frozen in time. Though she had continued to tease him with her antics, Igris Neihime really was worth meeting. A hand intertwined with hers and she realized she had long ago opened her heart to those who resided within this other world—lover or not.

"Farewell, mentor of mine," She spoke with a thin smile as she grasped Alicia's warmth tighter, 'You'll forever be in my memories.'

The two disappeared from the hall.

And, just like that, the cover makes sense and arc 1 of volume 2 reaches its end. Yes I designed Claire from the cover, not the other way around. Though, she's yet to swing a malleable water blade.

If you don't know, I actually write this story as I go *cough* it's an unserious work for fun, a breaker if you will. Now, R. A. T. H, that I write and plan seriously.

This is Claire rn btw—without the sheath (her usually azure eyes only turn gold when she's using <Lord's Glance>): 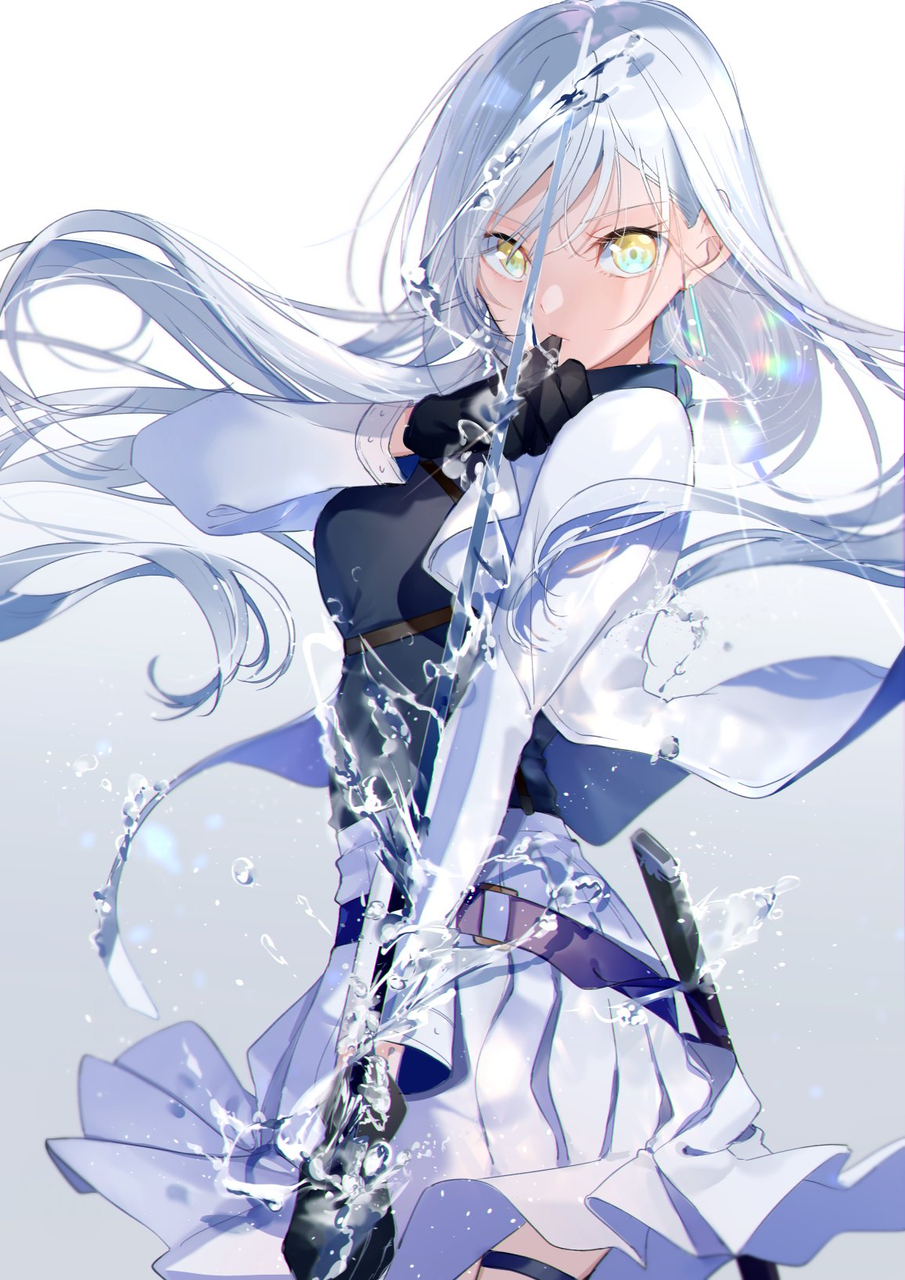