[MOD: Titor - Link successful. Welcome to Project MirAIs]
[BlahBlahGame - Cool stream, but first a word from our sponsor, Rai-]
[Horizon_Stepping_Moo - Third star incoming! At this rate i might have to change my name to Stargazing_Moonfox]
[Wow! A lot of verified users are here for once!]

[The heck? How are you verified with those user names?]
[Winder - 4AM newcomer!]
[I hope you all got first aid kits at hand. If this debut is anything like the others, we will need it.]
[genericuseralt - Let's get into trouble, shall we?]

[H.V.G - This is going to be pretty interesting.]
[Laica Lavridge - Just as it is obvious that people die when they are killed, so too it is that simps will simp.]
[Rintaro - El. Psy. Congroo.]
[Chat works? CHAT WORKS!!!!]

Gentle piano notes, almost like falling raindrops. A lone violin joined in with a somber solo. At the end of it, light piano arpeggios sounded out.

The camera showed a slow pan of mist covered mountain peaks and a lone woman with light blue hair, staring longingly into the distance.

The music suddenly kicked into high gear, synth drums and a distorted electric guitar joined in a frantic and fierce driving rhythm.

The camera distorted, flickering through scenes like spinning back a roll of film.

The woman, lying at the foot of a monstrous blue dragon, crimson blood staining her body as it poured from a fatal wound.

The same woman, now a young teenager, standing with a kind woman that looked like her, but with black hair.

A man wreathed in shadows with ominous crimson eyes, looming over the corpse of that black-haired woman.

The blue-haired woman, still a teenager, screaming in anguish as she discovered the corpse.

Two azure dragons flying through the mountain peaks, crashing against each other. One with malevolent crimson eyes, and the other with icy blue.

All of the scenes faded out, dissolving into bits as a familiar time machine crashed down into the void, opening a gate and revealing golden light and a familiar line of text: [Project MirAIs]

And then a lone female voice started singing.

"I'd rather be... blissfully blind
Leaving everything now up to fate... as well as to time."

The scene changed to the blue-haired woman, walking across a snow-covered field, a sword with a glittering blue sheath on her right side.

A stream of tears, rains down somewhere
Gentle lies covering up the pain, as the truth draws near

Space rippled and the woman was suddenly surrounded by assassins, crackling with azure lightning. Seeing them, the woman narrowed her eyes and drew her blade, causing icy blue light to splash everywhere. The silhouette of horns and a tail emerged, followed by a gust of icy wind before the camera panned up to the sky.

A 3D transparent box containing flickering screens, all of that woman fighting over and over again.

Infinite choices spiraling outwards, noise that obscures it all
Reach out your hand now, defy that cruel god now,
Fulfill those words that you turned into vows

The box shattered, along with the screens, and countless stars started to take their place, along with a blue sphere suspended in the void.

The scene cut back to that blue-haired woman lying on the ground with a fatal wound. But as she reached out to the sky, countless lights started to emerge, causing the scene to fade out in static.

Everything now, reduced into dust
Only to be restored

The scene shattered, revealing the blue-haired woman once again walking across the snow-covered field. But this time, when the assassins showed up, so did two other people. One a man in a white lab coat, and the other a silver-haired woman with burgundy eyes.

So right now just facing that cruel dead end that leads nowhere and all of the strife that's bound to be there
Restart the time to start over again
Knowing that we'll be here right by your side...
Start a new... life...

The scene shifted back to the woman staring longingly at the mountain peaks. But then the camera panned back, showing Titor standing in front of a glowing golden gate and holding out his hand.

The woman turned around and then let out a faint smile before grabbing his hand.

And then the video feed cut to a black screen with only a few lines of text. 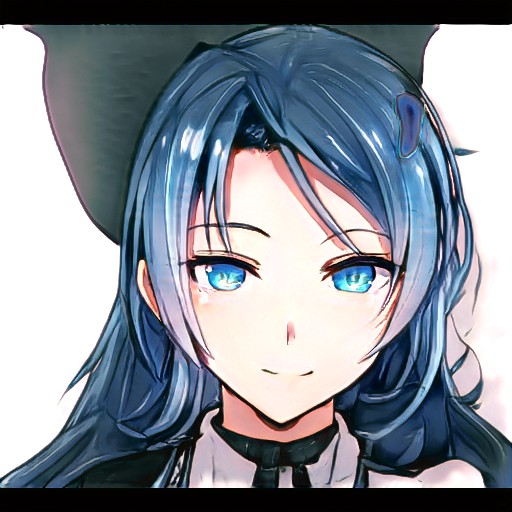 "H-Hello? You can hear me, right?" A smooth and low female voice echoed.

Aoko leaned back, staring at the screen. Furrowing her brow, she muttered, "God, this is cringey... I-I mean, good morning everyone!" She put on a clearly forced smile and said, "Aoko Ryuusei here! Ao are you?"

[lol wut?]
[*I can feel the secondhand cringe*]
[*Should we sue Titor for inflicting cruel and unusual punishment on his talents?*]
[worker abuse!]
[MOD: Titor - Oi! This was her idea!]
[That's what you say every time!]

"What was I supposed to do... Oh, right. The chat. Like... this?" She snapped her fingers, causing a chatbox to appear on the left side of the screen. Unlike a normal one though, the chatbox looked to be covered in snow, with the occasional snowflake drifting across it.

Aoko stepped back, revealing her full body as well as the surroundings. Her outfit was fairly simple, a plain white dress shirt with black slacks. But it seemed like her shirt was either a size too small or she didn't know how to button it, since the first few buttons were left undone, revealing a deep and pure white valley.

Like Alfi and Hana, Aoko's room was a typical steel warehouse room. Unlike them though, she had decorations up.

A box set of Inertial D sitting on a shelf. A standing punching bag with a blurred picture of a handsome blonde man taped on it. A closet filled with Nikeys clothing and casual wear.

[*lol. Is that a picture of the real John?*]
[Does Aoko have a grudge against Mister Smith...?]
[How sure are we that John is telling the truth about the girls having free will...?]
[MOD: Titor - Hey! That's defamation!]
[You're a time traveler. There's probably a parallel dimension where it's true.]

Aoko glanced at the chat and then chuckled. "Seems like you guys think the same about that guy, huh? Doesn't he seem like a guy you'd want to sock in the- Ahem. I mean... Should we get started with the introduction?"

Aoko frowned and said, "I feel like I'm forgetting something... Oh yeah." She snapped her fingers, causing a pair of blue horns and a thick scaly blue tail to appear behind her.

Aoko glanced back at the chat and then smirked. "What a bunch of perv- I mean, could you refrain from saying such words? That's rude."

Aoko tucked a strand of her light blue hair behind her ear and said, "First off... Introductions- Oh wait. Did that. Then next... The bio, right?" She muttered and then tapped something in front of her.

The chatbox scrunched down to the bottom left corner.

"Let's see... There we go." Aoko tapped again and a window of text appeared in the open spot on the top left. Like the chatbox, it had a snowy theme.

Aoko forced a smile and said, "Here's my basic biography! There's not much to tell, but I'm working hard to become an idol like Miss Alfi! Please treat me well!"

Aoko's eye started to twitch and she said, "Next, likes and dislikes."

[Hana and sports I get, but drifting?]
[Something tells me she's got a trauma with riajuu...]
[*She doesn't like her father?*]

Aoko glanced at the chat and then frowned, mumbling. "Why is my chat so different from those two?"

Aoko smirked at that and said, "She'll get mad at you, Hana. But thanks. Anyway... Let's just get this train wreck over with as soon as possible. I'm getting shivers down my spine from just standing here."

"First, I like Hana. She's basically like a little sister to me, and I'm here to help her out." Aoko paused and said, "And I guess Alfi's alright too."

Aoko read the last chat and laughed. "Looks like Alfi's got a lot of white knights riding to her rescue. That's cool... I guess."

Aoko crossed her arms and then said, "Drifting. In my... home world, I enjoyed drifting from place to place a lot. But here on Earth, I discovered that you humans had something else in mind when you talked about drifting as well. These... cars that you built to travel on are amusing."

[Wow. She said that with a straight face?]
[Maybe her acting isn't that bad after all?]
[*Such cringe... but it's hilarious.*]

Aoko coughed, something that sounded vaguely like 'fvcking bull$hit', but clearly wasn't. With a smile on her face, she nodded and said, "Your 'sports' are interesting as well. I'm fairly fond of what you call 'basketball.'"

"Next, my dislikes... First, I don't like irritatingly handsome men. Bad experience." Her eyes subtly flicked towards the punching bag in the corner of the room.

"Next, I don't like meddling old ladies." She frowned and said, "I'll decide how I want to live my life myself, thank you very much."

"And my last dislike..." Her eyes narrowed, flashing an icy blue.

"...John said to let it go, but I can't. That man did terrible things to countless people and even killed my mother. Although the situation is fine now after John intervened, he still..." Icy blue light began shining around Aoko, responding to her mood.

Aoko shook her head, putting on that fake smile again. "Sorry! I was just... Argh, fvck it. I'm sick of acting like this."

Aoko shook her head and said, "Look. You know that I'm a trash idol. I know that I'm a trash idol. Even so, I'm here, and this is what we've got." She held out her right hand, grabbing a mic from somewhere off to the side and said, "I'll sing you one song and then we're out of here. If you still want to stick around, I'll catch you at my first stream tomorrow morning. If not, well, Alfi and Hana are collabing with Meincraft later today. Anyway, song."

A slowed down and low rendition of an old 90s song common in karaoke bars. With her eyes closed and her face flushed red in embarrassment, Aoko sang while swaying to the beat.

And when she was finished, she gave herself a bit of applause to cheer herself up. But then she froze, as if just realizing that she was still live. Stiffly turning her face towards the camera, she turned a deep red and then punched the screen.

There was a loud *crack* and then the stream ended.