A suave and smooth voice, paired with soft brass and drums. A love song reminiscent of a candlelit performance or a fireplace night.

The one singing that love song was a handsome man with blonde hair, smiling as he gently swayed in front of a Christmas tree during his song. Snow gathered on his blonde hair and clothes, a white dress shirt and jeans. But he wasn't bothered and continue to sing.

When he finished his verse, the camera panned, revealing another man with slicked back black hair. Unlike the first man, the second wore a white suit and a white fedora. Adjusting the fedora with his left hand, he raised a mic with his right and picked up where the first man left off.

Watching those men perform on a giant wall-sized monitor were five women.

The first was a mysterious looking beauty with curled black hair and light green eyes, lounging around on a sofa with a loose white bathrobe.

The second was a foxy looking beauty with hair the color of autumn leaves and bright orange eyes. Wearing a kimono with sakura petals, she leaned on a beanbag and watched the screen while munching on Pawky sticks.

The third was a refined beauty with silky black hair and crimson eyes. She was dressed casually with a gray hoodie and jeans. Sitting on a folding chair, she sipped a steaming mug of hot cocoa and watched the performance with a smile.

As for the other two that were sitting on a comfortable leather sofa...

A haughty beauty with crimson hair covered her face that was just as red as her hair. Even so, she peeked between her fingers and mumbled, "Stupid dumb romantic breaking character at the dumbest times." Amadeus lowered her hand and then pulled her knees up to her chest, causing her white lab coat to shift.

Bright laughter echoed beside her. Another beauty, but with light green hair. Yue smiled at Amadeus and said, "It seems that someone is a bit dishonest about her feelings."

Amadeus blushed and then glared at Yue. "Shut up! I don't want to hear it from you!"

Zhaojun sipped her hot cocoa and looked over at the two. When she did, she let out a soft smile and said, "You should simply enjoy the performance, Miss Amadeus. A heartfelt love song is a rare occasion."

Amadeus scoffed. "What heartfelt love song? That guy's just showing off again." She grumbled but shifted her gaze back to the monitor, carefully watching Titor sing.

Daji got up from her beanbag and then sat down on it. Grabbing another chocolate covered cookie stick from her box of Pawky, she nibbled on it and sighed. "Big Brother is being thoughtlessly romantic as always..." She frowned. "But it's weird. I didn't think that there was another guy like Big Brother out there, but that Titor person..."

Xuannu sat up as well, causing her white robes to shift and reveal her skin for a bit before settling back down. After that, she waved her hand, conjuring a bottle of wine and a crystal glass. Pouring herself some wine, she took a long sip. "I guess this is my misfortune for not teaching the right person, huh?" She watched John sing and then sighed.

Yue glanced over and frowned. "Xuannu..."

She waved her hand and said, "Don't worry your little head about it, Yuyu." She took another sip from her wine and then smiled. "You make Johnny happy, so that's enough for me. Besides, you two bring out the best in each other... somehow. As his big sister and his teacher, I couldn't ask for anything more."

Daji rummaged around in a plastic bag on the floor and pulled out a soda. After cracking it open, she raised an eyebrow at Xuannu and said, "You mean you couldn't ask for anything more after getting chewed out by Big Brother, Xuanni?"

Xuannu drained her glass and poured another. "Ugh. Don't remind me, Daji." She paused and said, "And weren't you the one who broke down crying while apologizing to Yuyu?"

Daji's face turned red. "T-That's because I made a big mistake, okay? I know better now! Next time, I'll listen to Zhaozhao instead!"

Yue let out a warm smile and placed her hand on her belly.

"Hm?" Yue looked over and said, "Is something the matter, Amadeus?"

"No. Just..." Amadeus looked at the other women and then leaned over to Yue's ear. "Are you really fine with having those women around too?" She shifted her gaze to Yue's belly and whispered, "Aren't you jealous?"

"Ah." Yue's warm smile dimmed a bit and she nodded. Leaning over to Amadeus as well, she quietly said, "I am. But I'm more happy than jealous." Yue looked at Daji and Xuannu bickering with each other and then placed her hands on her chest. "Even though it means that I don't have all of Husband's love, it's fine. These warm and peaceful times make up for it. Besides." She looked at Amadeus and smiled. "If you truly love someone, you have to be willing to let them free. At the least, that is what I know now."

Yue tilted her head. "...Is something wrong?"

"No. But I guess we aren't as similar as I thought we were... Or maybe I was projecting too much..."

Zhaojun glanced over at Yue and Amadeus before shaking her head. Letting out an amused smile, she said, "Here Senior Brother and Mister Titor are singing out their hearts for their beloved, and yet you two are whispering to each other instead. Should I let Senior Brother know that he has competition? Perhaps after something was awakened upon seeing Miss Jenny?"

Amadeus turned a deep red and jumped out of the sofa. "I am NOT like that!"

Yue frowned. "Really? But you seemed so excited when Husband- Ah, I mean when Miss Jenny revealed herself."

Amadeus quickly shook her head. "T-That's different! Even is she was really pretty and made my heart-" Amadeus froze and then sat back down, covering her face.

Yue patted Amadeus on her back and said, "There, there. I won't begrudge you for admiring my Husband's feminine charms."

Amadeus raised her head and pointed at Yue. "How are you fine with that!? Isn't it weird?!"

"Hm?" Yue tilted her head. "...Husband is husband, no matter how he looks." She furrowed her brow and said, "Though I have to admit that I'm envious of how beautiful he is. Maybe that's why he isn't fazed by beautiful women...? Because he himself is a beauty on an entirely different level...?"

Yue nodded. "Yes. But Husband is Husband. And..." She blushed and said, "I-I admit that I have always been a bit curious about what 'that' would be like..."

Yue nodded, placing her hands on her cheeks. "Husband seems to enjoy my 'peaches' a great deal, so I have always been curious about how it would feel to-"

"Pervert!" Amadeus jumped out of the sofa and edged away from Yue, her face red. Pointing at Yue, she said, "You're not me!"

Amadeus opened her mouth and then shut it, pursing her lips.

Daji laughed and then held out her box of Pawky to Amadeus. "Here, Ama-chan. Have some sweets and calm down."

"...Hmph." Amadeus walked over and grabbed a few sticks before sitting down next to Daji, pointedly looking away from Yue. "...Weirdos."

Xuannu poured herself another glass of wine and said, "Considering that you and that Titor are self-proclaimed time travelers from the distant future of this world, are you sure you're qualified to say that?"

Xuannu rolled her eyes and said, "That's what everyone believes, Sweetie."

Zhaojun smiled and sipped her hot cocoa before looking over at Yue. After that, she paused and said, "Senior Sister is interested in Senior Brother's feminine form?"

Yue blushed and said, "A-Admittedly. B-Besides, as Husband's dutiful wife, I should be aware of every aspect of him, should I not?"

"Hoh~?" Xuannu looked over at Yue and said, "I thought you were a bit more proper than that, Yuyu... but it looks like Johnny loosened you up quite a bit, didn't he?"

Daji munched on a cookie stick and said, "Considering she's expecting a baby, I'd say that Big Brother did more than just 'loosen up' Big Sister."

Amadeus groaned and said, "Perverts. I'm here with a bunch of perverts."

"Oh don't be such a naive girl, Sweetie." Xuannu crossed her legs and waved her glass. "It's just sex. And as a 'normal human' I'm sure you're even more aware of how natural it is, aren't you? After all, if that Titor is even half of how Johnny is, I'm sure your nights are long and hard... Right?"

Amadeus jumped to her feet and said, "I'm leaving!"

Zhaojun sighed and said, "Please stop teasing her, Sister Xuannu." She sipped her hot cocoa and said, "Miss Amadeus cannot help the fact that she is still a pure maiden."

Amadeus blushed and then rounded on Zhaojun, pointing at her. "H-How did you know that?!"

Zhaojun smiled. "I did not. But I do now... Although." She frowned. "Odd. Even Senior Brother was not that shy in the past..."

Applause echoed from the monitor. There, John and Titor bowed. After that, the pair stood up and the camera panned, showing their faces.

John looked at Titor and said, "That wasn't so bad, was it?"

Titor sighed. "Since when did we switch roles...?"

John laughed and then waved at the camera. "That was for you, Wifey! Love you!" After saying that, he jabbed Titor in the ribs.

"Gah!" Titor flinched and said, "What was that for!"

"...Tch. Fine." Titor's face turned red and he adjusted his fedora. Glancing up at the camera, he averted his gaze and said, "...That was for you. I hope you liked it."

Daji squealed and said, "Titor is so awkward and cute!" She turned to Amadeus and said, "You're so lucky, Ama- Eh? A-Ama-chan!?"

Amadeus was standing, staring at the monitor. Her eyes were wide and her face was red, frozen in disbelief.

And then she tipped over and collapsed on the floor, a happy smile on her face.

Since no one ever got back to me about Alphy trying on that dress a long time back, I took matters into my own hands. Commissioned by Dovinder on Sketchmob like with John. 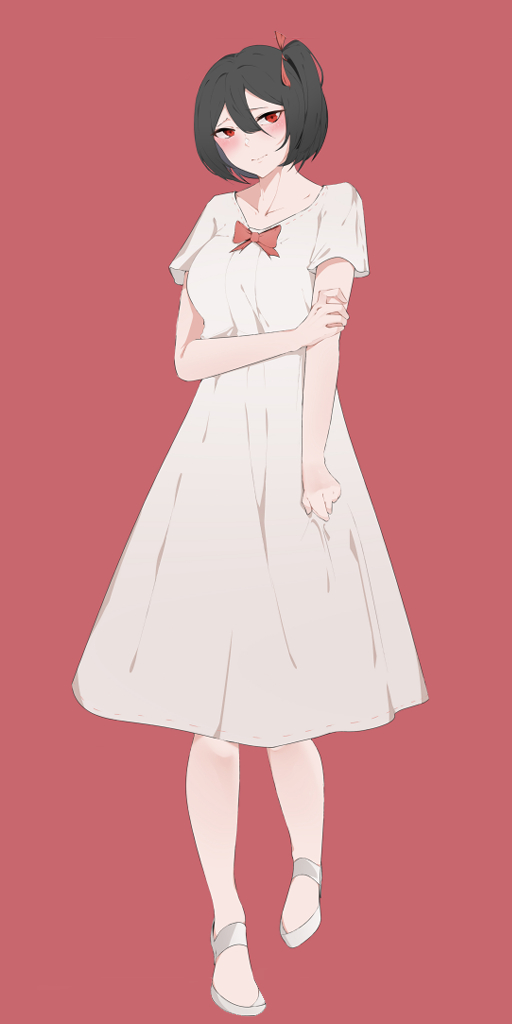