The elf and the harpy stared at each other for a moment. Both of them were frozen as they warily studied the other.

Ai realized that this must’ve been the harpy prisoner that the guard had been talking about, the one who managed to escape the captivity or dungeon. He wondered if she had been caught by the siren’s defense mechanism and that was why she was here.

She didn’t look particularly dangerous, but the flighty, wary look in her eyes told him that she could be dangerous in her state of fear and watchfulness.

Ai wasn’t sure of what to do. Should he call the guards and alert them of the harpy’s presence? It seemed like she managed to sneak off without any guards following behind her. Ai didn’t hear any footsteps that followed behind her. Or should he let her go and pretend that he hadn’t seen her? He wasn’t sure at all but he had a feeling that this was another choice that the game was giving to him right now.

The harpy looked as if she was ready to slash at him with her bird claws before she saw the pointy tips of his ears.

Slowly, the wariness disappeared in her eyes as she realized that he wasn’t a siren at all. Only a small white haired elf. The harpy’s lips moved, opening and closing as she tried to speak.

“H...elp me.” She pleaded, her voice hoarse and rough as if she hadn’t spoken in years.

Ai could only gape back as he mind bounced between each possible choice he could make at the moment. Yet before he could come up with a decision, quick footsteps could be heard marching from behind the mosaic wall.

Sensing that she was going to possibly get captured again, the harpy rushed to take a semblance of cover behind the tiny elf, even though his body really didn’t do much to cover much of anything. She didn’t grip his tunic or anything, but he could see them shaking. Her eyes were wild as they waited for the menacing guards to make their appearance.

Soon, two siren guards emerged from behind the mosaic display. Behind them, Oceana followed, looking incredibly royal with her white dress train behind her. She looked like a queen from a fairy tale.

Her eyes narrowed as she gave Ai a deathly glare.

The glare quickly vanished in an instant, turning into her usual gentle smile. With a flick of her wrist, the two guards who came with her relaxed their vigilant stance then stepped back.

“Envoy.” Oceana started, her voice soft and sultry. “I see you managed to halt the prisoner. If you would be so kind and return her. She is a trespasser and thus belongs in our prison.”

At the word “prison”, the harpy inched even closer to Ai, her feathers trembling along with her body.

Seeing that Ai didn’t move or push the harpy away, Oceana’s smile faded. Her ocean eyes stared viciously as the harpy as she spoke again, her voice louder and much colder, all pretenses gone.

“Naela, my dear.” Though her words were sweet, her tone was not. “Aren’t you tired of this yet? How many times are you going to keep returning? Didn’t I tell you that -”

“I refuse to believe you!” The harpy named Naela rebutted, her high pitched voice slicing through Oceana’s calm voice.

A twitch on the siren’s left eye told him that she wasn’t happy at being cut off mid-sentence. Ai could see her patience slowly wearing thin. Soon, she won’t have enough to deal with both of them being pushy and disobedient to her words.

“Then you leave with not much of a choice.”

With another flick of her thin wrists she commanded the guards returned to their previous stance. The two broke into a wide formation to cover as much ground as possible. Their eyes were determined to follow through with the priestess’s orders and capture this harpy. They seemed a bit too eager to serve her, as all sirens did.

There was probably a skill that Ai could use right there and then that would make things so much easier, but that moment his brain couldn’t process much. His instincts drove him to slowly back away with the harpy still against his back. Athens flapped his wings furiously. If it was a cat, Ai had a feeling that it would’ve hissed at them right about now.

“Is this your choice then, envoy?” Oceana said, her voice flat. She looked at him with an expectant look, as if she already knew that this was the choice he would’ve made anyway.

“Just know that with this decision, you’ve made an enemy out of me.”

Oceana gave a tilt of her head towards the two of them then turned back towards the mosaic mural, her long dress train swishing behind her like a single magnificent cape. At her signal, the two guards started closing in on them faster, in their hands was a trident that glinted under the bright lights.

As Oceana’s figure disappeared into the mural, the harpy peeked her head from behind Ai.

“Nebule! Wake up, please!” She yelled, her voice raspy and slightly broken. Yet desperation was seeped into every word that she uttered.

“...what?” Ai muttered, looking at Oceana’s back with shock on his face. Was she really…?

Oceana didn’t even glance back, soon she completely disappeared into the mural. With her gone, the two guards quickly took their chance and ran full speed at them. Without another thought, Ai pushed at the harpy and urged her to break into a run. She could probably fly and it would’ve been way faster but the thought didn’t come across Ai’s mind at all.

The elf and the harpy ran at full speed, away from the castle. Ai’s mind raced as he led the harpy into the back alleys, trying his best not to let them get caught by the guards. He didn’t even have the time to think about what he’d just heard. For now he would run and hopefully lose their pursuers somewhere in the back alleys.

When he looked back, the last thing he saw was his shadow beast holding back the guards while following behind him.

After countless alleys and more running than he ever did, they finally managed to lose the guards and found a single dark alley where they could rest.

It was surprisingly clean there with minimal trash and it was quite dark so someone looking for them would have to try slightly harder if they wanted to see them in this alley.

Both of them were panting, their breaths ragged and staggering as they tried to get some oxygen back into their tired and overworked lungs. The harpy, Naela, recovered faster. Ai was still trying to catch his breath while the harpy peeked around the alley and tried to see if anyone was nearby.

Soon, Naela looked back at him with a shake of her head, telling him that they managed to lose their pursuers after all.

Feeling exhausted, Ai let his body slide against the brick walls of the alley and onto the ground. His leg muscles were burning and pulsing from overuse, the soles of his feet hurt from running but at least his breath was slowly getting back to its normal state. Athens hadn’t returned to its owl form yet, instead its giant shadow form carefully curled around Ai’s tired body, as if trying to protect him.

Naela soon retreated from the mouth of the alleyway and joined him, sitting right across from him, her eyes carefully darting between him and the sleeping shadow beast. She had looked incredibly ruffled before, but now after a run she looked even more ruffled. Some of her feathers had turned crooked and in disarray, her hair also met the same fate. Her brown dress looked even more stained and worn if that was possible.

Soon both fell into comfortable silence, both slowly gaining their bearings. Ai controlled his breathing and massaged his aching legs while Naela pruned her feathers, plucking the broken ones and straightening the ones that could still be saved. In the end, she still looked ragged, but at least her feathers were neat and in place.

“Naela.” Ai started, leaning just a bit forward so he could lower his voice just a bit. “At the castle. Why did you call Oceana....”

Naela looked away from the feathers in her left wing and looked at him with nothing but pain in her eyes.

“Do you know her? Nebule?” Naela leaned closer as well. Her eyes pleading at him to tell her if he knew anything.

Letting out a deep breath, Ai took out the letter from Nebule out of his inventory and quickly gave it for Naela to read. He didn’t hesitate as much as he did with Nameless. Why? It was probably because of Naela’s expression. She looked sad, desperate, and just lost. It tugged hard on his softer side.

The harpy gently opened the letter and slowly read the contents of the letter, her eyes taking in every curve and etchings of the letters in it. Once she was done reading, she clutched the letter to her chest, holding and hugging it so dearly and carefully. Tears flowed freely from her eyes, every drop sliding down her cheeks and chin before landing on the ground. Each drop making a single mark.

“I...you heard right? That it wasn’t the first time I’ve ever been there? In the castle and dungeon?”

Unsure of what to say, Ai only nodded. He was unwilling to say anything that would interrupt or break the moment.

“I...I was there to break Nebule out of her prison.” Naela whispered, her voice breaking and her breath turning slightly ragged from her crying. “I didn’t care what it took to do it. I didn’t care for anything else.”

Ai’s eyes drifted towards the brown white wings. He didn’t notice it before due to the commotion, but now he saw it. The bones weren’t straight. They were slightly bent at an unnatural angle. The wings...they were broken. From the looks of it, it had been broken for quite the time. That means....she was a flightless harpy. She couldn’t ever soar high up like all harpies do.

“I thought harpies and sirens were enemies?”

Naela dejectedly nodded her head, but then looked up with a blazing look on her face. “But that doesn’t mean it's forever. Me and Nebule are proof. We can come together!”

The harpy looked at the letter once more. The tips of her wing gently brushed over the letters in them with a gaze full of affection.

“That’s why I need to break Nebule out of her prison! We made a promise to each other!”

“Then tell me where she’s being kept. I can help -”

Naela shook her head before he could even finish his sentence. Why? Was the location so hard or obscure that it would be nearly impossible? Or was it too late? 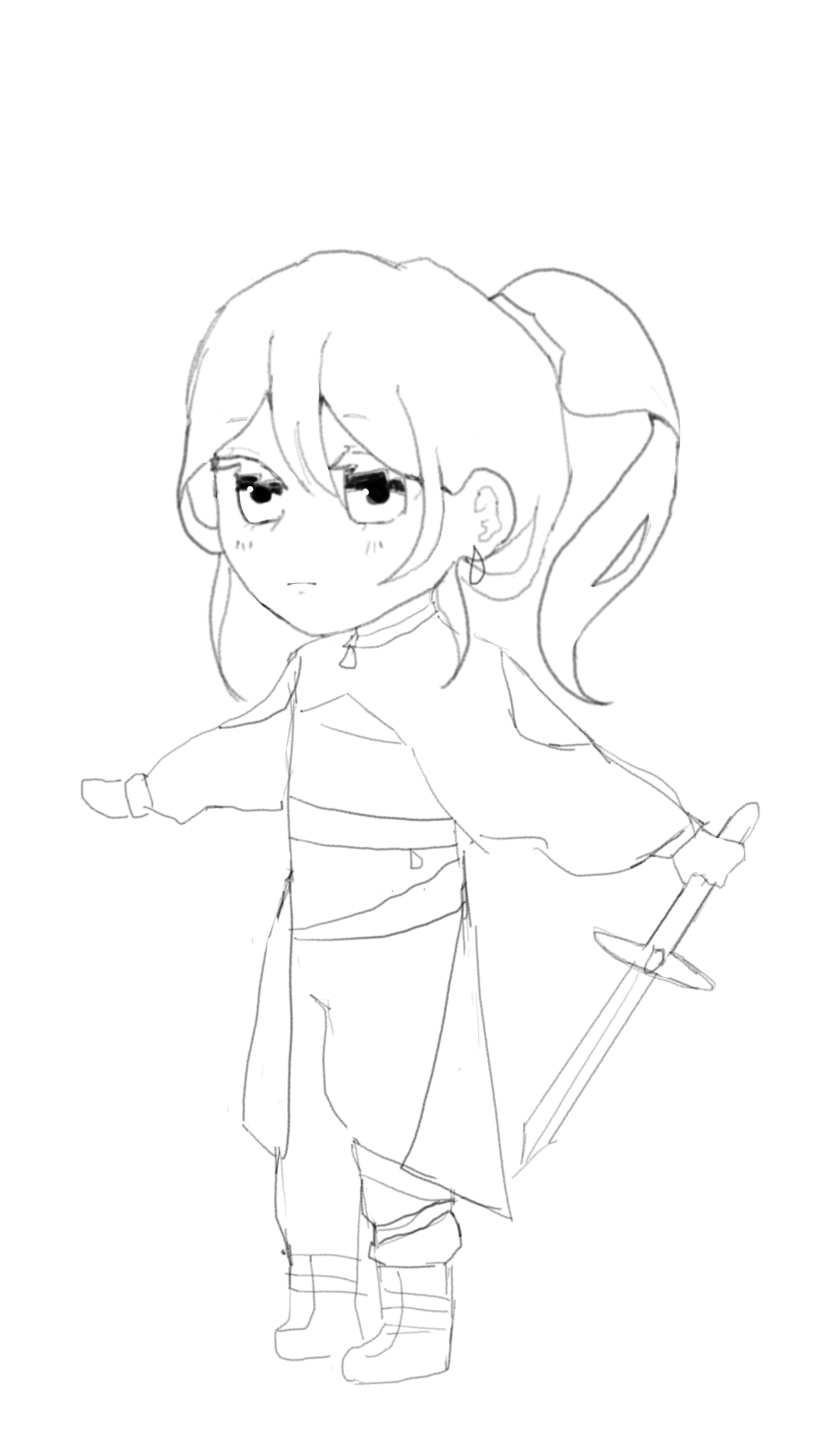