Let there be arranged suitable hiding places in a high place for every town and city. Every man, woman, and child must have a pack of essentials set aside in readiness for the next monster wave.
—Mayor Ludvig Lundbye of Aarlborg, in a letter to the mayors of the nearby towns, Mayoral Archives Office

“Ahem.” I took out a photograph of Dr. Viktor Greve from in between the pages of my notebook. “Now to discuss the problems of the present era. Twenty years ago, a certain scientist started researching the JRSV-CAMV-23 virus.”

Now Sariel quieted down on his own. All three Commanders were listening very closely.

I took out a folded printed page of a scientific magazine that I’d gone to great trouble to acquire. The headline was “A Vector for Introducing New Genes Into Monsters,” and it had a picture of Greve on it.

“His pioneering research work on genetic engineering, as you know, was the initial basis for the EL Project. What you probably don’t know is that the JRSV-CAMV-23 virus that he used was a mutated version of the Iah virus. That was what he used on you three. Doctor Greve’s EL treatments gave you superhuman powers by harnessing the virus’ ability to absorb anima. I will now be taking questions.”

The three were silent for a while, digesting the information I had just given them.

“I think I understand,” said Seraphiel. “You’re saying that we’re infected with the same Iah virus from ancient times. Did you cure us yesterday?”

“I weakened the virus in your bodies, but no, none of you have been cured.”

“Then there’s no hope?” said Uriel.

“There’s hope. I know you’ve been ill for a long time,” I said. “What did the doctors tell you?”

“Ever since Dr. Greve died, no one’s been able to continue his research properly. The doctors told me that I was ill because of the EL treatments. They’ve been giving me all sorts of drugs to treat the side effects, but they said that there was no way to kill the virus without killing me,” said Uriel.

Dr. Greve was alive, actually, but that wasn’t my business. My mission was to eradicate the Iah virus, not to deal with all of the Kraej Company’s cliques and splinter groups.

I nodded. “Correct. The poisons that are strong enough to kill the virus would be fatal to you, too. I’m the only one in the world who knows a way to cure all of you permanently.”

I opened the notebook to a drawing of a stick figure wielding a huge blade. “The goddess Elyon’s chosen hero must battle the tiny little bits of the Iah monster that are left. When he defeats the Iah monsters, I’ll swoop in to vanquish the psychic fragments of Iah in the spiritual plane. The reason why you can’t be cured right now is because the existence of the Iah spawn strengthens the virus. When all the Iah monsters are defeated, I’ll be able to completely cure you.”

The goddess had prepared an enormous pool of anima for me in the spiritual plane that I could use to get rid of the Iah virus once and for all.

“You mean chosen heroes, plural, right?” said Sariel. His red eyes were staring at me unblinkingly. Seraphiel and Uriel also seemed awfully excited. “You want the three of us to fight those monsters!”

“Er, no, no, you’re way off base.” I scratched my head and laughed awkwardly. “None of you are the hero.”

“But we’re the three strongest people in the world! Just like Adon and his legendary companions!” said Sariel.

I winced. “No, please listen to this carefully.”

I showed them an illustration of three people being swallowed by an enormous black-fanged mouth. “What I need from the three of you is simple. You must all stay away from the Iah monsters. The three of you are the strongest in the world right now, but you’re also all infected. If your strength is added to Iah…”

I shrugged then looked up, putting the notebook down for a moment while I folded my hands in prayer to the heavens.

Uriel covered his face with his hands.

Sariel grabbed the notebook and gawked at the drawing. “You’re saying this Iah is going to EAT US?”

He shouted the last words. Seraphiel put a hand on his shoulder, and Uriel groaned.

“No, no! Like I said, you have to keep away from her. I mean, it,” I said. “You’ll be fine so long as you never come into close contact with the Iah monsters.”

I handed them three copies of a map I had prepared which had the known locations of all the Iah monsters marked on it.

Seraphiel handed me another piece of candy while Uriel and Sariel poured over the maps, shaking their heads and discussing the various locations.

I coughed. “I need to go to Kraej City today. Why don’t the three of you go off and think about it for a bit? You should talk about it among yourselves.”

“Oh? Why do you need to go to Kraej City today?” said Seraphiel. His tone of voice was accusatory.

“Hmm?” I said in an innocent manner. “I have business there.”

“I thought you were going to Kraej City to see me,” said Seraphiel.

“Could it be that your real reason for being here is to find this so-called hero, not me?” said Seraphiel. He was actually glowering down at me. I’d never been the target of displeasure of a six foot eleven tall EL soldier with glowing golden eyes and, let me tell you, it’s not a fun experience.

“Ely, you used to be such a cuuuuuuute little boy,” I said. “When did you grow up to be such a suspicious adult? Don’t you know that I’ve literally traveled uncountable miles just to see you again?”

“Hey, you haven’t told us who you are yet,” said Sariel.

“Stay out of this, Sariel. I’ve already told you that she’s an angel,” said Seraphiel. “Asteria, what are you planning to do now?”

“I knew it!” he said. Seraphiel’s eyes were narrowed, and his thin, pale lips were turned down. He looked like a pissed-off schoolboy who felt betrayed because he had just been told that vacation was cancelled. Or that Santa Claus wasn’t real.

“Ah, Ely, you’ve got it all wrong. I’m here to see the hero on official business, but I stopped to see you first because you’re special,” I said. I took his hands in mine, ignoring the jolt of revulsion I felt, and looked deep into his eyes. “I’m doing all this for you.”

Seraphiel colored slightly and the corners of his lips turned up. Damn, he’s just too easy, isn’t he? I’m worried that unscrupulous people will take advantage of him in the future. I was starting to feel really sick from touching a carrier of the Iah virus so I released his hands.

I did a naughty thing.😈 I used a image editing tool to make Asteria's boobs bigger in the cover art, but I think it ended up a little lopsided. What do you think? Is it okay to use? 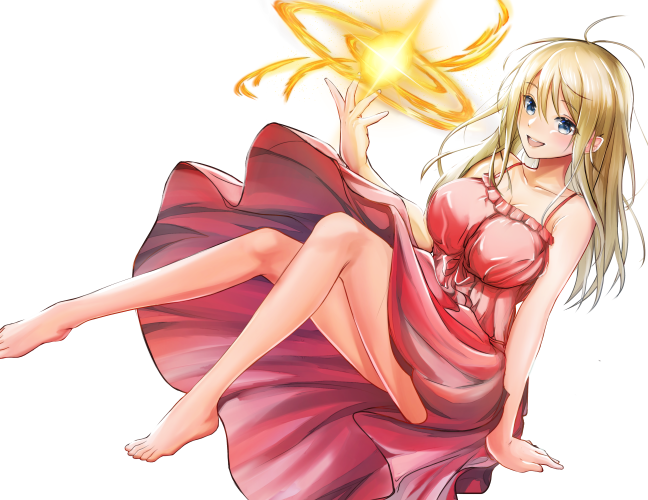 Back to the story: