Cross-country trains are technologically possible, but the committee’s latest study shows that the maintenance cost of such a behemoth would mean that the cost of train tickets would be too expensive for most rural folk.
—Excerpt from the minutes of the 87th meeting of the Committee on Rural Transportation

Slowly, with an air of great solemnity, I took out a small wooden box from my pocket. Touching the center of the star-shaped etching on it to dispel the seal, I opened it to reveal an artifact, a piece of metal that had been bent and twisted into itself so many times that it was hard to make out its exact structure. All artifacts were black until activated, but this one had tiny, almost invisible golden sparks swirling inside it.

“I present to you, the pinnacle of anima manipulation, the king of all magic, the ultimate and unrivaled artifact that contains all of the elemental attack spells, the Radiant Vortex.” I’d been practicing that.

“Impossible,” breathed Sariel. “There’s no such thing as a spell that uses more than one element…”

“With this, a person can cast all the elemental attack spells at once - Fire, Ice, Earth, Gust, and Bolt,” I said.

Sariel was just staring at it with his mouth open. I turned to Seraphiel and asked casually, “How much do you think it’s worth?”

“It’s literally priceless,” said Seraphiel. “Are you really selling it to Sariel?”

Sariel closed his mouth with an audible snapping sound. Fingers trembling, he reached for the artifact. “It’s real…”

The corners of my mouth twitching, I fought the urge to laugh. “Sariel looks like he wants some alone time with the Radiant Vortex. He’s not artifactsexual is he?”

Sariel was cradling the artifact in his hands. Lifting it in front of his eyes, he activated the Radiant Vortex. Many-colored lights swirled inside the artifact, softly illuminating his wonder-struck features.

“Ahem.” I held my hand out for him to return the artifact to me.

“She has a cruel streak,” Uriel whispered to Seraphiel. I didn’t turn to look at them since I was busy enjoying the look of reluctance on Sariel’s face.

“He shouldn’t have called me a scammer. Never piss off an angel,” I said as if to the room in general. The note of mockery in my voice snapped Sariel out of his daze. He lowered the Radiant Vortex then held it behind his back. I withdrew my hand.

“Did I say ‘scammer?’ I meant ‘wise and powerful messenger of the goddess.’ I apologize if I caused offense,’” said Sariel. “You mentioned something about money? I’ll pay whatever you want for it.”

“Not for sale,” I responded instantly. “Why, just imagine how powerful the person wielding this would be! A sufficiently powerful spell caster could create a vortex of wind, fire, ice, earth, and electricity to engulf multiple targets. Alternatively, he could choose to blast each spell in rapid succession with no waiting time in between.”

I didn’t even bother to reply.

I took a piece of candy from the dessert plate and put it in my mouth. Seraphiel and Uriel were both smiling in delighted schadenfreude.

“One hundred million. I can’t raise any more than that even if I sold everything I have,” said Sariel.

“Please leave me out of it,” said Seraphiel.

“Just tell me what you want!” said Sariel.

“One hundred thousand credits every month as a rental fee,” I said. “Complete secrecy regarding where you got it. Twenty percent of your income each year donated to charitable causes.”

One hundred thousand credits in Verden was around the same value as one hundred thousand Singapore dollars on Earth. The Kraej Company paid the S-class ELs a ridiculously high salary because they didn’t want the three Commanders to leave. The prestige the Kraej got from having the world’s greatest warriors on its payroll was well worth the expenditure.

The EL Project was this world’s greatest scientific accomplishment of the past century, allegedly costing over thirty-five billion credits. It was comparable to the money the USA spent on the first crewed moon landing on Earth. Since the Kraej had already spent a fortune on EL development, they didn’t flinch at the few millions it took to keep the ELs happy.

“And you’ll owe me unlimited favors, of course,” I said.

“This is slavery...” said Sariel, but he put the artifact in a jacket pocket and zipped it closed.

I took out two more boxes from my pocket.

“You prefer to use your fists, right?” I said to Uriel. “This Constellation Crystal multiplies the wielder’s physical force automatically, but it does drain your anima. You might want to put it on a bracer and equip it only when you need to use it.”

“Deal.” He put the artifact in a jacket pocket, too.

“Do you want a nice little present, Ely?” I said.

“Yes,” said Seraphiel. To my surprise, he pushed my hand away when I tried to hand him an artifact. “The present I want is for you to stay here with me. It’s not safe for a girl to live alone in this city.”

“Be a good boy and take this.” I handed him the artifact. “If you mount this Sidereal Protector on a bracelet, all of your abilities will be boosted and you will be immune from status spells like debuffs, poison, sleep, and so forth. It will also automatically heal you when your health falls below a certain level.”

Seraphiel handed the artifact to him without even looking at it first.

“Will you at least promise to call me every day?” Seraphiel grabbed me by the shoulders and turned me to face him.

“I can’t promise that,” I said. “I’ll try to check in every day if I can, but there’s no guarantee that there’ll always be a phone nearby.”

“Uh, we’ll just see ourselves out.” Sariel and Uriel got up and started walking away from the dining table, but I wouldn’t be tricked that easily. I motioned at Sariel to return the Sidereal Protector. Looking slightly disappointed, he put it back in the box in front of me.

“Could you please look for an apartment for me in East Thuesen, preferably sector eight or close to it?” I said to the departing pair.

“Yes, master.” That was Sariel. The two ELs left silently.

“Why do you need an apartment? If there’s anything you don’t like here, I’ll change it,” said Seraphiel.

“Ely, be reasonable.” His touch was making me feel nauseous so I pushed him away. Seraphiel scowled mutinously, eyes narrowed, and lips thinned.

Did he have abandonment issues? I winced. “Let’s compromise, okay? I’ll try to stay here for three days out of the week.”

“What do you mean by ‘try’ and why only three?”

“I reckon I’ll need two days a week to take care of the hero business and two days for personal errands.”

“Three days for me and two days for the hero?” Seraphiel’s brow smoothed. “But you can just stay here while you do personal stuff.”

“No. This is not a negotiation. I’ll stay here three days every week. I’ll call whenever I can when I’m not here.”

I cleared my throat. “Seraphiel, you’re out on monster-killing missions every week, right?”

“Only from Monday to Friday. A lot of the missions are nearby so I often go home at the end of the day.”

“Oh? Tell me the truth, how many days a week are you out of the city?”

Seraphiel looked away from me.

“It’s actually most of the weekdays, am I right?” Seraphiel didn’t answer, which was answer enough. “Did you think I’ll stay here in your apartment twiddling my thumbs while you’re away? I’ll stay here during the weekends when you’re actually here.”

“...Alright, if you promise to call me as often as you can.”

“Fine. Now what kind of fruit is that one?”

Seraphiel still looked a little put out, but he did finally drop the subject. We talked a little bit more about trivial things like what kind of breakfast I liked, and if I should get a bus pass or use cash. I noted down his phone and office telephone numbers to memorize later before pleading fatigue and going back to the guest room to turn in early.

Tomorrow was going to be a busy day. 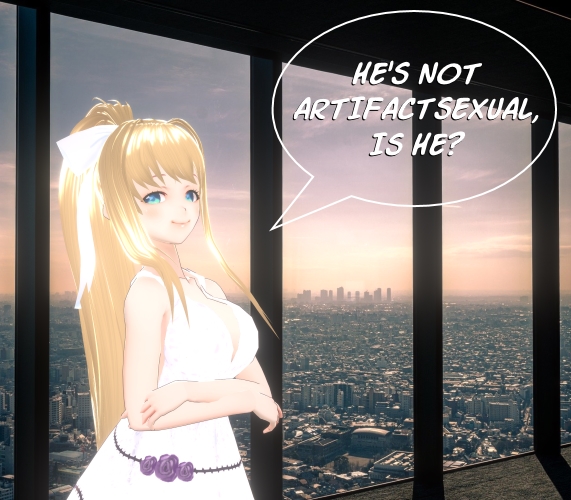 I made this image with Vroid Studio (free 3D modeling app by Pixiv) and a free background image (it's Shibuya) by Pixabay. The  text was added with free program Paint.net. I think I made her boobs too big, lol. 👀 That's mostly because of the dress, but I'll fix it next time.