Rusty had straps running before him, holding him in place and preventing any unfortunate rocking during transit. They made a lot of sense, but right then they were in the way.

I slashed at a strap, then cursed as it shivered like a plucked lute string and I almost dropped my knife.

“Are you okay?” Clin whispered. He was above, partially hidden by the top of the train. He was watching out for gnomes, but I didn’t think there was too much danger. There was still some fighting going on, still some people shooting back.

“Rusty’s locked up tight,” I said. I sawed through one of the straps, then, once it was cut apart, started to tug it off Rusty only to find the cinch that held it in place.

I felt a little stupid, but in my defence, it was dark, and I didn’t dare try to find any light, not when that would mean alerting everyone that we were here. The gnomes knowing would be bad. The other passengers too. I had enough on my plate keeping Clin and myself alive.

“Shit,” I muttered as I followed one of the chains around Rusty’s legs to a brace in the floor. They were held in place with a heavy padlock.

A smart way of making sure that no one left with a mech without permission. But at that moment, real inconvenient.

Clin dropped down onto one of the other mechs, then to the floor of the car. “What’s wrong?” he asked.

I gestured to the padlock.

I shook my head. “Why would you think that?”

“Nevermind,” he said. “Can you move Rusty anyway?”

I tugged the chain. Not hard enough to make it jangled too loud, then followed it with my eyes. It looked around Rusty’s hips, then back around over the mech’s shoulders. There was another identical chain on the other side. They were relatively thick. I didn’t think Rusty could break them.

The mooring, though, wasn’t as impressive. The wagon’s floor had reinforced iron beams across it, but over that was plain wood, and the loop the padlock and chain were hooked onto was screwed into a thick plank. Two thumb-thick bolts. “Yeah,” I said. “It’ll make a whole hell of a lot of noise though,” I said.

“We won’t exactly be leaving here with any subtlety, I don’t think,” he replied.

That was a fair point. I let go of the chains and shifted over to Rusty’s side. We tugged open the mech’s front, Clin preventing it from hitting the mech ahead of us. It was a tight squeeze, but I managed to slip in and fumble my way onto the pilot seat.

I buckled myself down, tossed my hat into its spot, and lowered the control interface onto my head.

Clin pulled himself in without making too much of a racket, which was about what I could ask for, and he shuffled to the back and onto his little seat. “I don’t like being unable to do anything,” he said.

“Tough,” I said. “I’m not about to let you sit on Rusty’s shoulder while I run out of here.”

Clin was quiet for a moment as I jabbed the control needle into my collar and tried to focus through the disorientation to get everything started up. I was trying to keep things quiet, but there was only so much quiet a mecha could manage.

“We are not gonna save the passengers?” he asked.

I considered it. “No. There are too many gnomes, as far as I can reckon, and even if they only have one mech, that’s one too many for my tastes. I doubt they have that few.”

“How many gnomes did you see?”

“A few groups of them. I can’t give you any specific number. Maybe ten groups? Squads?” I wasn’t all that knowledgeable on military matters.

“The gnomes like standardization. That’s five squads to a platoon. Three mechs per platoon.”

“So six,” I said. That was about five more than I figured I could take with any sort of chance to live.

“Yes, but those six won’t all be the same. One combat mech, certainly, but two transports, especially for a deployment this far afield. The walker transports they use are armed and armoured, but, well.”

“They’re transports first,” I said. I might have seen a few of those around, or maybe older ones. Big cumbersome machines, with some light armour on the sides and at least four legs. I imagined the military transports had a few guns, but maybe they weren’t anything to worry about.

I leaned forward, pulled my spare flask from under my seat, and took a big gulp.

I laughed and handed the flask back. “Don’t get wasted, I might need your fancy elf fanciness to help me through this.”

“Expensive, so don’t waste it.”

Rusty shifted. The mech was squatting down a little. That changed as I straightened him out. The chains around us strained, stopping me from standing straight, but I kept pushing. Legs able to lift the several tonne bulk of Rusty fought against some old wood holding the mooring points in place.

The chains snapped past, and I launched Rusty to the side.

We tore through the support bar caging us in, and I had to kick my legs out fast to steady Rusty as we crashed to the ground. I immediately reached over Rusty’s shoulder and pulled the mech’s rifle from where it hung even as the remains of the chain rattled as it slipped off Rusty’s shoulder.

And then some fidiot shot me.

I winced as the bang echoed through the cabin.

“That was loud,” Clin said. He took another long sip from my flask.

“Give me that,” I said. He pushed it into my waiting hand and I took a swallow. The burn was wonderful.

Then we were shot again.

“We just repainted,” I swore as I gave Clin the flask back and turned.

It wasn’t hard to trace the bullet-trail back to a single gnome with a bolt-action rifle standing next to one of the cars.

I shifted one of Rusty’s legs back, tucked the rifle against the pads on the mech’s shoulder, then made sure the magical lines were properly connected to the rifle. I barely even aimed.

Rusty’s vision was a pain to deal with during the day, turning the desert sand into a bright, colourful mess, and any living thing into a barely discernible blip.

At night, everything was a beautiful dark blue, with a haze above it in the evening as the warmth was leached from the sand. People stood out as red beacons in the darkness.

The gnome’s orange glow turned into a splatter as a 25mm round punched through his torso and kicked up sand behind him with a boom that echoed out across the dunes.

“I suspect they heard that,” Clin deadpanned.

I might have been in a snarky mood, and lacking sleep, and perhaps I’d taken my first step toward inebriation, but that didn’t mean I didn’t have a head on my shoulders. I started to run out towards the dunes, on a path that would follow some of the train cars until they bent the other way. Then it would be straight for the edge of a dune. If I could put some hills between the gnomes and myself, then that would be for the best.

A window was smashed open on the side of a passenger car, and some gnome that thought he was clever jammed his crank-fired gun in the hole.

I worked the lever on Rusty’s rifle, turned while still walking, and fired into the side of the car.

When the red light of Rusty’s round faded, it revealed a man-sized hole in the train car’s tin side, bits of dead gnome behind it. There were more within though, and a lot of other bodies scattered on the ground, their heat fading.

I fired another round, then started to overload the next one.

The explosion made all the windows burst. I kept moving on while carefully reloading.

Maybe the big rifle was a little bit of overkill on infantry.

The fidiots definitely deserved it though.

I came around the back of the last train car in the row, then stopped and stepped back.

A beam of brilliant light scythed through the air where I would have been with another forward step.

This was going to be such a pain. 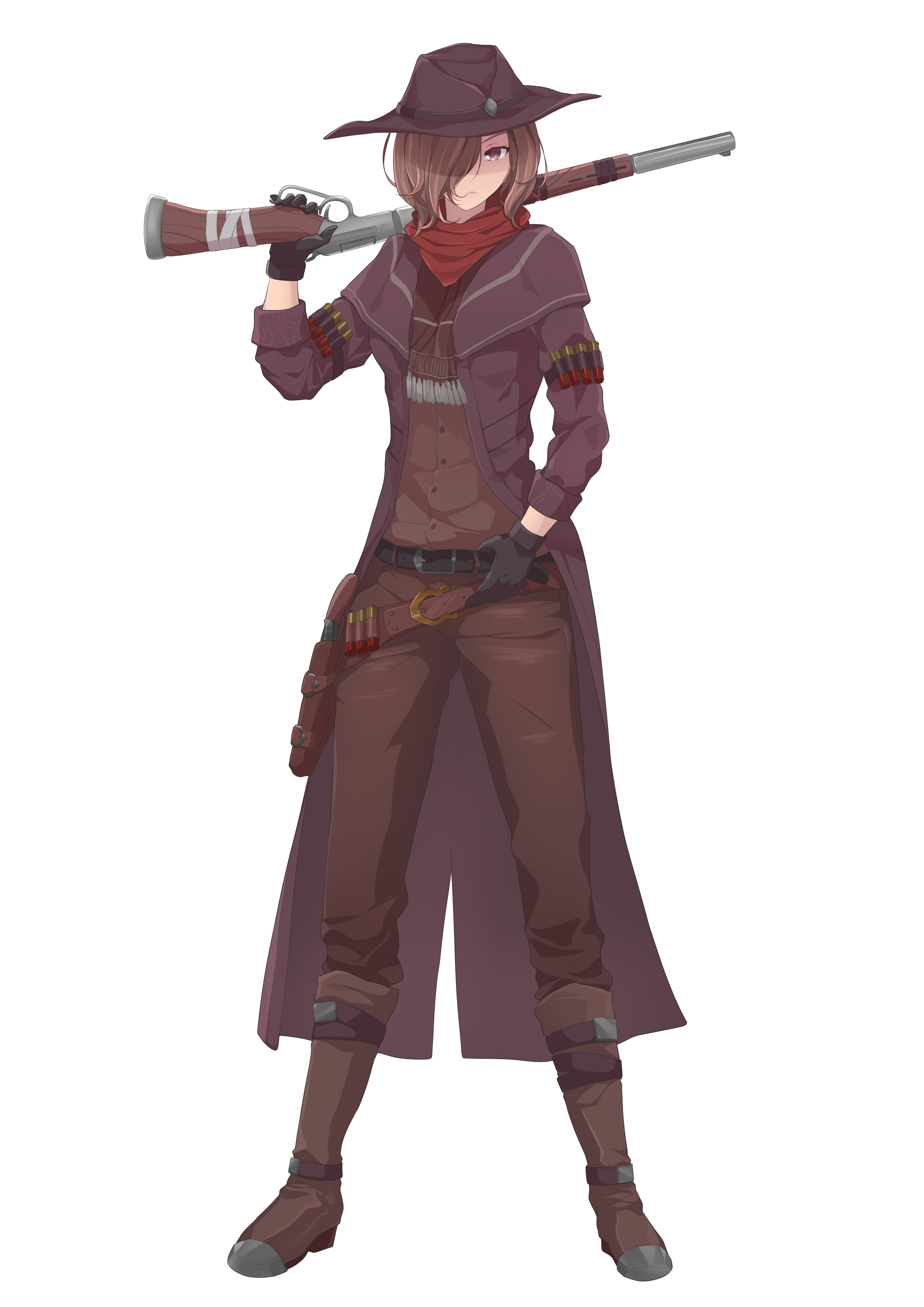 The month's coming to an end! This was... actually, a nice month, all said and done.

No schedule, because things will be a bit weird this week!

But have this, all of the chapters available for patrons:

The following books are available as paperbacks (and as Ebooks) on Amazon. Oh, and there’s an awesome audiobook for Cinnamon Bun Volume One and Two!