The first person we met was another secretary, though this one was a young man with the sort of harried look that made him seem like someone always on the verge of panicking.

“No,” Clin said when the secretary asked to see the letter. “We want to show it to someone with some authority, and, forgive me for saying so, you don’t qualify. If you were to open the letter now, its authenticity might be questioned.”

“My friend here is telling you to get someone important,” I said. “So go fetch.”

The secretary ran off, and to my surprise, Clin moved out of the cramped little office. “I’m going to get changed,” he said.

“I’m not as presentable as I’d like,” the elf said.

I kept with him as we left the office and stepped back into the stinking outdoors. Clin marched right up to Rusty, kicked the mech where it would deploy Rusty’s step, then opened the cabin and climbed in as if he’d done it a thousand times before. I was... a little impressed.

I was less impressed when he closed the door in my face. “Hey!” I called out. “What do you think you’re doing?”

“What, you think you have anything that I haven’t seen but bigger?” I asked.

“Stop being a barbarian for just a moment, would you?”

I crossed my arms and, after losing patience with waiting in the scorching sun, moved into Rusty’s shadow. Soon enough, the cabin door shifted aside and Clin climbed back out, this time in his formal elven robes and without his hat.

“There, now I’m... well, somewhat respectable,” Clin said as he patted down the robes. They looked a bit rough at the edges, stained by sand and sweat, but they were still mostly clean. “Let’s go intimidate some people, shall we?”

We stepped back into the WCRU building to find the same secretary by the front, hands rubbing together while someone unamused stood next to him. A big-boned man, with bushy brows drawn together. “Hello,” he said. “I’m head of procurement here. I was told that you needed to see someone important?”

“Hello,” Clin said. Somehow he made that sound as if he was condescending to greet the man. “I’m Clin of clan Teast’wood, the premier mecha engineering clan of Lunastrum. I was aboard one of your trains just yesterday. The Sandpiercer, out of Daggerwren.”

“Oh,” the head of procurement said. He was standing a little taller now. “I do hope the ride was pleasant.”

“The amenities were sparse, and the ride rough, but nothing beyond what I expected,” Clin said. “It was... passable, until the train was ambushed. I’ve recently lost my escort. Three type fifty-four combat mecha. I had to hire this... bounty hunter to escort me all the way here. Trust me when I say I would rather be continuing on my way back home, but I did promise I would deliver this letter to the person in charge of this company. It’s from the head engineer of your train, a very understanding man.”

“The train was ambushed,” Clin corrected. “Some peasants were lost. A few of the passengers died, but in the end the bandits were fought off, if at great expense.”

“I, I see, well, this does need to go up the chain a little,” the man said. “Pardon me, Mister Teast’wood, but could you wait here just one moment?” He cleared his throat and looked to the secretary next to him, then the receptionist. “Well? Get Mister Teast’wood some refreshments.”

Clin and I were led to an elevator which pushed us up a couple of floors. I figured the higher we were, the more important the people we’d meet would be.

Our first stop was a little lobby area where Clin sat down and a nervous young woman served him tea and biscuits while shooting me strange looks. Clin didn’t speak up until we were alone again. “We’re getting somewhere,” he said. “Sorry if I’m treating you poorly.”

“Hardly an act. It’s just how you’re taught to behave when interacting with certain people. It’s not something I’ve ever found pleasant, but you can often bull your way through a lot of obstructions just by demanding that those same obstructions move out of your way.”

“If you say so,” I replied. “I’ve always been more of an... intimidate-my-way-through kind of girl.”

“Isn’t this the same thing?”

“You’re intimidating them with titles and by making them worry about their wallets. I just intimidate folks with a big gun. It’s a whole lot more straightforward.”

The door to the waiting room opened, and that same young woman stepped in and gave us a false sort of smile. “Mister Elam is ready to see you,” she said.

I nodded to her. Fair enough. Probably the sort of thing someone coming here ought to know.

Clin took the lead again, and the secretary led us across the entire floor and to an office at the end. It was a nice one, large, with a desk dominating the middle. A few of those scale models like at the entrance were sitting atop metal plinths, glass cases around them. The trains within looked a whole lot older. And across from that, a whole wall made of glass, overlooking the train-yard at the back of the building. I could see the little figures of men with hard hats moving about, and large trains pulling into garages for maintenance.

The man behind the desk was as plain and unassuming as the room wasn’t. A stick-thin fellow, with hard eyes and a tug to his lips as if he was one comment away from sneering.

“You must be Mister Elam,” Clin said.

“And you’re a Teast’wood,” the man said. “Didn’t expect a visit from your sort.”

I shifted a little at the hostility, then I noticed someone in the shadows at the back of the room doing the same. A guard, with a short rifle already in hand, but pointed to the ground. He stared right back.

Clin reached into his robes, then placed the letter from the kobold engineer on the table before Elam.

One of the man’s eyebrows rose, but he took the letter and opened it, then read quickly. “Slavisa Ral. One of our best engineers, held back for promotion a few times over. Mostly on account of not being human enough,” Elam said. “But too talented to be given the boot. A good man.”

“You trust him?” Clin asked.

“As much as I trust any employee I’ve barely spoken to. Gnomes?”

I nodded. “A detachment. Military, with all the training and equipment you’d expect.”

“And you still made it out alive?”

“Plenty of folk didn’t. But we had numbers and the Sandpiercer is a big toy to smash things with,” I replied.

“Hmph, I suppose. You know this is a prelude to war.”

Elam barked a laugh. “Because I’m not a fool. But there are plenty who are. I suppose you’ll be heading over to the militia next?” he asked.

“That was the plan.”

He huffed. “They won’t believe you.” Reaching into his desk, he pulled out a loose sheet of paper and a pen. “I’m writing you a letter of recommendation, and if you give me a moment, I’ll have my secretary copy Slavisa Ral’s letter here. Give it to Major Gary Cooper. He’s got a head on his shoulders, and is one of the highest ranked people in this city.”

“No. but you might seed the idea into the front of that thick skull of his,” he said. “It might make it easier to convince him later.”

“What do you plan to do about all of this?” I asked.

“The gnomes have killed a few of mine and, more importantly, have disrupted my business. I’m not pouring them a cold cup of water when they arrive. Problem is, we’re a trainyard. We can build trains, not warmechs. But we can build big, and that ought to count for something.”

“Spread the idea around maybe,” I said. “Some folk will leave for greener pastures.”

“And leave less folk to defend the city?” He huffed. “We’ll see about that. Here.” He slid the letter to the side, folded it, then took a pre-made wax seal from a box and held it next to a lantern with a magical core glowing within before he pressed it down.

“Now, before you go anywhere, I’ve done you quite the favour, for all that it won’t do you any good. How about you two tell me what exactly an elf is doing meddled in all of this?”

“I’m a complicated man, one with some time on his hands. So start from the beginning.” 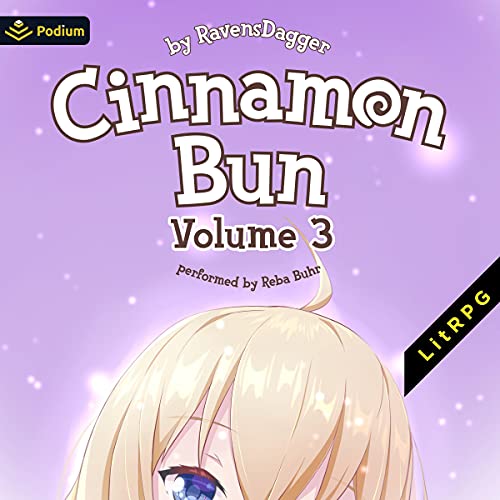 Cinnamon Bun Volume 3's audiobook is now up for Pre-Order! Picture is a link! Check it out! More news as it comes out! (I'll try to grab a sample for y'all)