I huddled within my wall-crack. Nearby, the mists roiled and twisted, seeming almost agitated. Alive.

They parted, spitting something out.

I slithered out of my wall-crack, moving to meet it - her - eagerly.

The Grateful One dropped another defeated Little Puppeteer before me as I neared, presenting her newest offering. She was covered in veins of green and black, having returned from the corrupting mists - and yet, she still presented offerings to the Great Core’s Champion despite the corruption.

The Grateful One was proving her worth.

Her faith in the Great Core was surprisingly strong for a Coreless that had only recently found the light of the Great Core. I hissed my thanks; she hissed back. It was better than when the-female-who-was-not-Needle tried, but most sounds were. That didn’t mean much.

Still, I made sure to pay careful attention to the Coreless. Her faith might have been strong, but she was only a Coreless - less than even a Lesser Core, though it pained me to admit it. For all her devotion, she might still fall before the corruption of the Lesser Core.

Slowly, the green-black veins that crisscrossed her otherwise-pale flesh in a disgusting and tangled mass began to fade away. I hissed again, with approval this time.

Her [Little Guardian’s Totem] was filled with an almost transcendent [glee], and it only grew stronger when her offerings were accepted.

My jaws widened around the plant-flesh bad-thing’s corpse - tried. They didn’t quite fit, forcing me to rake my fangs across the soft plant-flesh, ripping the carcass into smaller and smaller pieces. Each new slash of my fangs brought another spurt of [glee] and, oddly, [spite].

I swallowed the mangled remains, just as I had all the ones before. During the recent days, while The Grateful One had learned to fight from the-female-who-was-not-Needle, my other Coreless had occasionally assaulted the mists - and as the level of [Little Guardian’s Focus] increased again, its range quickly following, they had pushed even further. It had been enough to bring me close to the next upgrade, but not quite. Not until now.

Progress Towards Next Upgrade: 0/20.

As [Spore Puppeteer] increased again, I quickly looked over my spores. There was the sense that combining them would take a little less effort than before, that I would lose less when I tried to combine their aspects. That was good; I had only managed to infest one other root of the great darkwood during the recent days, and both infested roots were far from the point where they could be controlled.

My plans to steal the Lesser Core’s most powerful follower were still a long way off, unfortunately.

A hand, almost entirely free of the green and black veins that had covered it before, reached down and broke me from my thoughts with a careful grasp. I let it pull me up, ignoring the instinctual revulsion at being so close to the Lesser Core’s corruption. Trying, anyway.

“How did it taste, Little Guardian?” the corrupted-who-was-not-corrupted asked. “Good, I hope.”

I hissed, allowing her to scratch at my head-scales. She had earned a reward. The Unrepentant One spoke, breaking his long silence. Unlike not-Needle and The Grateful One, he didn’t ever try to practice his hissing with me. It would have probably been painful for me anyway, so I wasn’t sure how to feel about it.

“I doubt the taste matters much,” he said, chuckling slightly under his breath. “It wouldn’t matter to me, if I could gain abilities by eating like an Ascended does.”

“I suppose you’re right,” she answered.

When her reward was finally given out in full, I turned my attention back towards the nearby wall of mist - or what had been a wall of mist. Now, it was thin and dying.

Cluster by cluster, sections of the mist fell, the spores that made up its body dying out in great masses. With the Little Puppeteers defeated and devoured, there was nothing to replace them. As it receded, I noticed the decaying remains of a few Coreless that had been hidden in the mist - both by sight and scent-taste. They were starting to rot.

As each corpse revealed itself, The Unrepentant One walked forward, hauling them away. He brought them towards where The Grateful One and I waited, placing them gently against the wall of the nest.

One of them squelched and let out a horrifying scent-taste.

“Urgh,” The Unrepentant One groaned, [disgusted]. The Grateful One’s nose wrinkled, but was less [disgusted] and more [sympathetic]. Maybe she knew the dead Coreless. For my part, I tried to mask the scent-taste by bathing my mouth-flesh in [Mana Fire]. It worked, but only a little bit.

Finally, the mist fell back entirely, revealing the parts of the many-nest that it had concealed - and one part in particular.

“And there it is,” The Grateful One breathed, spotting the same thing that I had - the poorly hidden moving-wall that marked the entrance to one of the many-nest’s great towers.

Before, its lower mass had been hidden within the mists, leaving only its upper sections clear to soar above, but now it was completely free. Its bottom section was wide, wider than nearly anything else in the many-nest barring the other towers and the great darkwood tree that soared above them. It had to be - that was the only way that it could hold itself up.

If other moving-walls that I had seen were a testament to the Coreless’ inability to hide their nests’ entrances, this moving-wall was…

I didn’t really know what it was. Some sort of abomination, maybe. There were just so many things wrong with it. Too many things, almost.

The first was that it was just too big. The giant thing, a confusing combination of two moving-walls, was at least four not-Needles across and two tall. Why was it taller than any Coreless could ever possibly be? That was just asking for some giant bad-thing to enter the nest.

The second was that, despite its size, it looked weak - covered in the same carvings of plant-flesh and natural growths that I had found throughout much of the many-nest. Each and every cut that the Coreless had placed into the moving-wall’s flesh was just another spot that a bad-thing could shatter more easily.

The third was the worst part. There were strands of ore-flesh, too weak to support the overly-fragile moving-wall, that lined its edges. And they glittered, shining in the light cast by the nearby glow-caps, highlighting the moving-wall’s location.

I was starting to think that the Coreless didn’t try to hide their moving-walls at all!

A smaller moving-wall would have made much more sense - not that any moving-walls ever did. I shook away the thought; for now, the Coreless could keep their mysteries. If they ever built a Great Nest in honor of the Great Core, I’d just have to make sure that they hid the entrance properly.

“Hmph. Fancy door,” The Unrepentant One said. “It doesn’t look too damaged; maybe we’ll be able to get something out of this after all. Might as well check to see if there’s enough in there to keep everyone going while we’re here. I wouldn’t want to get everyone excited only to find out that it’s all uprooted itself and walked off somehow. Or died.”

“I really doubt that could happen. I hope not, anyway,” The Grateful One said with a hint of [worry]. She paused, thinking for a moment. “I really hope not. People might start resorting to eating vines pretty soon if we can’t harvest anything useful from the crop-towers.”

The Unrepentant One just laughed, leaning his giant claw of ore-flesh against one shoulder. “We’re not that bad yet, there’s still plenty of time left. Come on, stay behind me. Your armor can’t take hits like mine can, and we don’t know what’s behind that door.”

He stepped forward, approaching the Great Moving-Wall, Most Confusing of All Moving-Walls. The Grateful One followed, carrying me with her.

Then, far too easily, the moving-wall opened with a single push.

A fragrant scent-taste slammed against my tongue, setting my mouth watering.

It's the first of the month! That means that now is the best time to subscribe to my Patreon! Read 30 chapters ahead for 5 dollars here!

(Make sure to select a role to view the server's channels)

Today's shoutout goes to Mark Of The Fool, a story written by a friend of mine. With over 10,000 followers and nearly 1,700 pages posted, it's certainly a novel you can sink your teeth into. Quality writing, frequent updates, and more - what's not to love?

After his parents died, Alex Roth had a plan: become a wizard. Through hard work, he was accepted into the world’s greatest university of wizardry—but fate had another plan.

On his eighteenth, he is marked as one of his kingdom’s five Heroes, chosen to fight the land’s great enemy. But his brand is 'The Fool', worst of the marks.

Rather than die or serve the other Heroes like Fools in the past, he packs up his little sister, his childhood friend and her cerberus, then flees for the university in hope of refuge, magic and to unravel the truth about his land’s evil.

There’s one small problem: The Mark tries to ruin magic while enhancing skills outside of divinity, combat and spellcraft.…

…that is, unless he can learn to exploit the hell out of it. 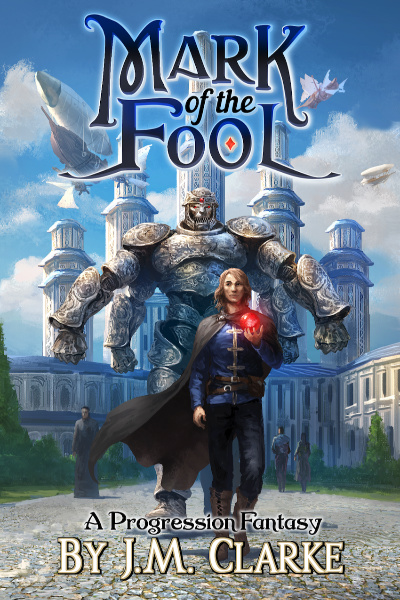 Read Mark of the Fool here!