Alice has led Nolan to a new section of the cave.

Over there was a blackboard.

On it was written many different skills that were essential to ants.

This ranged from the ability to scavenge food, to types of food/material useful to the colony as well as how to detect allies and foes.

Many of these skills revolve around the concept of releasing pheromones.

Others contain minor abilities such as how to use his mandibles (scissors) to fight prey and what things he should bite (cut) and what he shouldn't.

All in all, these were just some of the basics that the silver-haired girl drilled into this new worker ant.

"Are you ready now?"

A sharp and commanding cute voice sounded out.

Nolan shouted his heart out.

Soft laughter could be heard as surrounding female worker ants gave slight glances towards the male worker ant who was shouting his heart out with a bright red face.

Alice herself did not seem to mind it as she then turned around and slowly marched forward with her head held high.

Nolan slowly followed behind with a slouched back.

"March properly, soldier! Straighten that back and bring those knees up!"

Nolan shouted out again in embarrassment.

How long more do I have to endure this torture.

And how does she even know how I am marching, does she have eyes behind her back or something?

That is a question that lingered in Nolan's mind.

The answer to that, perhaps he would never know.

Rhythmic stepping sounds were heard as Nolan marched behind Alice.

Surprisingly, the only ants that were marching around were the two of them.

The other worker ants were just looking at them while busy with their tasks.

They did not bear any malicious laughter, but rather entertained ones as if they were observing strange but cute things.

This did not help Nolan from his embarrassing plight though.

The sounds of crickets rubbing their bodies could be heard.

The surroundings were no longer the dark subterranean tunnels, it was lush green.

Many large green stalks could be seen in the surroundings as leaf stalks towered up into the skies.

Pebbles that littered the ground were also enormous, looking like boulders.

A shrill girl's voice sounded out from the front.

Alice marched forth as Nolan followed behind.

After continuing this routine for about 15 minutes already, he was starting to get the hang of this.

It was also pretty fun.

This seems to be one of Alice's quirky hobbies from his views of the other worker ants.

It sure was an interesting experience to start out his new life under such a weird senpai (senior).

Nolan's thoughts were running about as he mindlessly marched forth.

The silver-haired girl at the front said as she stomped her left foot on the ground.

Nolan who was momentarily distracted was brought back to reality by the sudden change.

"Hmph, you aren't alert soldier! Drop down and give me five!"

The silver-haired maid turned around as she strictly ordered while pointing her left index finger to Nolan.

She repeated in an angry tone which could look nothing but adorable.

Nolan got to his knees to do his pushups.

After the entire fiasco, Nolan was now perspiring.

He was just a newborn ant, and he was already subjected to a military order.

Could he apply for child abuse?

Anyways, Alice began climbing up a leaf stalk as she wrapped her hands and legs around the thick trunk.

Nolan was surprised by how graphically different this was from his imagination.

"And don't look upwards, or you will get it from me!"

Nolan was now tempted by those words.

Doesn't it spark your curiosity about what is under that long black skirt?

It sure did for Nolan.

Go on soldier, we will not forget your sacrifice.

The internal monologue in his head continued.

Nolan took a leap of faith as he swiftly cranked his neck up.

He could see a flash of white.

Yes, a white kneesock that showed a large left foot slamming against his face.

Nolan fell all the way back down.

Alice's annoyed voice could be heard.

Looking up, Nolan could see his tiny senior above the stalk, standing on a leaf.

It was a shame that her skirt was long enough to mask what is underneath, but it seems Nolan has to crawl all the way back up.

Once he got up above, he could see the tiny silver-haired senior sitting patiently by the side.

She looked as he finally reached the peak before getting to her feet.

Alice then swung the silver scissors from her back forward as she began cutting into the leaf.

Oh another update, something I sure did not expect. By the way, this is the concept art for Act 0 which was posted elsewhere ages ago. This is still a passive project so don't expect much from it. 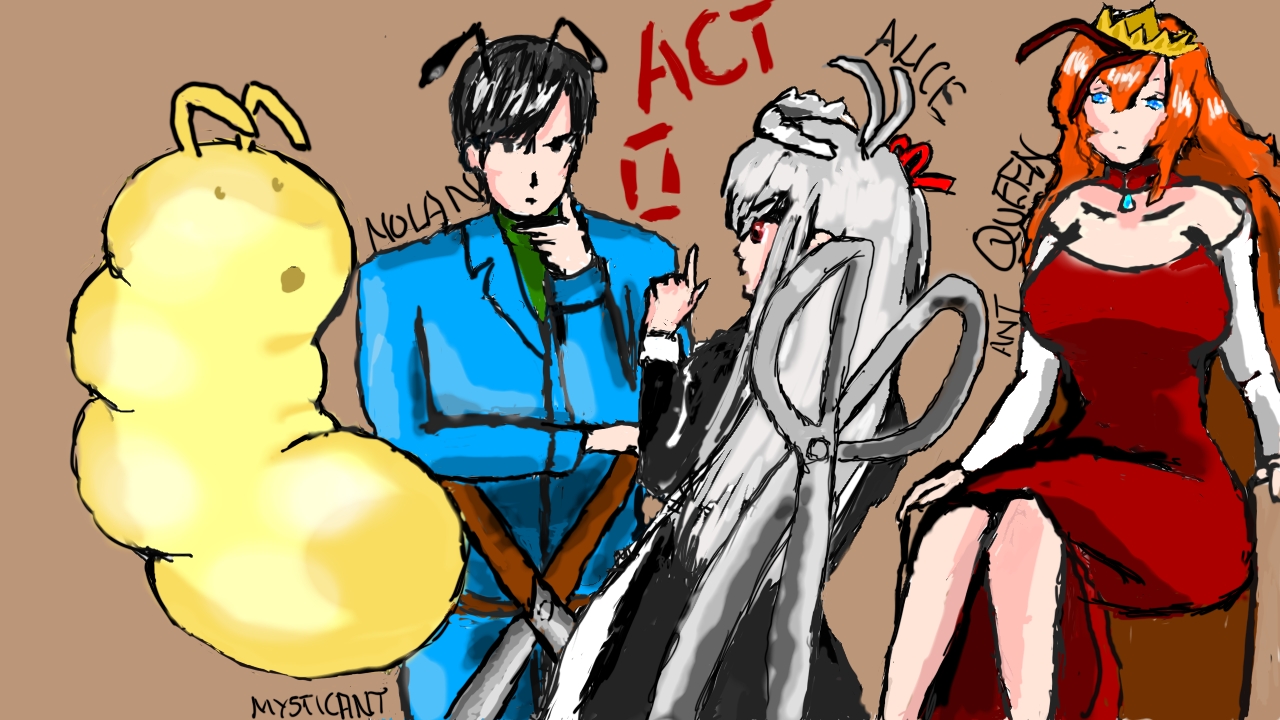