The troop of Templars rebuild their formation and then start moving along the road at about the same slow pace as before.

I don’t feel like following them. Not only are they giving me and my friends dirty looks, I need time to build the army that I’ll need to strike Algecante.

That means that I need to start producing more and more monster friends. I can supplement that with local monsters too.

While monsters aren’t cowardly, they will back away from the defences of a city, and a big army walking through the countryside should be left alone unless the monsters that run into it are really annoyed, have been ordered by my mom to attack, or if that army happens to corner the monster.

Most monsters are clever enough not to pick a fight that they’re clearly going to lose.

That should mean, obviously, that the area around Algecante should be relatively thick with monsters, especially if the undead have been patrolling far outside of the city’s walls. They’ll have pushed back the local monsters.

I get onto one of our birds with Felix while Esme and Bianca hop onto the other. Then we take off into the sky and look for a dark pool.

I find one after barely ten minutes in the air.

That one served to make a dozen or so large raven-like monsters, each one as tall as I am with boney wings and long, sharp feathers. “Alright, birb boys,” I say to the murder. They stare at me with intelligent eyes. “We’re looking for more friends. Scour the countryside for gatherings of monsters or even just random strong monsters and send them towards the road. Tell them to avoid the undead and not to attack anyone unless they’re attacked first. We’re forming a wave.”

My new bird pals take off with a chorus of ominous cawing.

That done, I return to the dark pool and then hesitate. What kind of monster would be best against the undead?

Right now, the undead’s big advantages are the tirelessness of their army, and their overwhelming numbers.

They’ll have bigger, stronger undead mixed in too, to make things complicated, but for the most part we’ll be dealing with a lot of skeletons and ghouls and zombies. At least, that’s what I think we’ll have to deal with. I’m not an expert on the undead, but I imagine those are the types that are easiest to make with few resources.

I consider it for a bit. I need to counter a large number of troops. Eventually, in a war of attrition, I’ll win. It’s almost guaranteed. But we’re trying to strike fast and hard.

Can I afford to make a lot of monsters that’ll all die quickly with the limited time and supplies I have?

I suck some air between my teeth and make up my mind. I’m not going to make quick and disposable monsters. They’ll just die when they’re overwhelmed, and being smaller they won’t have much of an advantage against the average zombie or whatever.

So I’ll go the other direction.

Dropping to a knee next to the dark pool we’ve found, I close my eyes and dip my hand into the waters.

It takes a good twenty minutes for me to finalise the design in my head, but the first one is always a bit trickier than the next.

The pool bubbles and churns, and from out of the depth comes six long legs. They’re quite tall, with their knees way up above and their thighs drooping down to the monster’s main body. The limbs are all fairly thick, and covered in chitin-like armour.

The monster’s main body is thin and sleek, with wings pressed up against its back, and a head like a mantis, but with a few extra eyes.

At the front, the monster has a pair of long, scythe-like arms. The exterior end is covered in serrated spikes, and the inner side is one long blade.

The monster looks at me with two of its four eyes, the others checking around us individually, in case something comes up.

“Neat,” Felix says. She walks up to the monster whose legs are about a head and a bit taller than she is. “Is it a mantis?”

“Not quite,” I say. “I came up with it just now. We’ll have to see how it fares against the undead. I made its scythes like shrimp clubs. It can bash with the spikey end or cut with the other if the undead come close. And it’s tall, so most zombies or whatever won’t be able to reach it easily.”

Felix reaches up and is able to touch the monster’s head, but then it sways to the side with a minute shift to all six of its limbs. “I get it,” she says. “Some undead might be able to run past it though, from underneath.”

“Yeah, but most of the local monsters we’re recruiting are fairly small. They’ll fill in the gaps. These guys can chop heads and stab with their feet. They can fly a bit too... maybe. I’m not sure if I got the weight to thrust ratio right. It’s hard to figure out.”

“Even if it just makes them lighter, it’ll help,” Felix says. “Maybe find some with Joy magic?”

I dip my hand back into the pool and create another. This time it only takes about ten minutes for the monster to start pushing its way out of the pool. This one is made with a soul that has a great affinity to Joy magic. Likely some cultivator or some sort.

It’s much faster than the first one I made, and is able to hop around the clearing we’re in with short bursts of flight.

“I’m going to use all the other elemental souls I had with other kinds of monsters. I’m thinking of scale-covered giant cats. But you know, attuned to different elements. Fire, water, lightning. That way they can breathe that kind of attack out onto the undead.”

“That sounds really nice,” Felix says. “Bet it’ll scare the necromancers when they see an army of monsters who can cultivate charging at them.”

“Eh, monsters can’t properly cultivate. It’s more that they can feel the emotion enough to empower that kind of magic, but it lacks the fineness of proper cultivation. Well, unless you’re talking about really clever monsters. But they basically follow their own rules.”

Esme stomps over to us, only pausing for a moment to stare at the two mantis-monsters I’ve made so far. “I found something,” she says.

“Oh? What is it?” I ask. I need a bit of a break. Only two monsters down, hundreds to go, and I’m already a tiny bit tired. Spacing things out will make it easier, I think.

Esme raises a book. It’s a thick, dark tome with a binding that’s made of old leather and blackened iron. The book that the Templars stole from a necromancer who in turn stole it from Semper. “This has a bunch of information about necromancy. But it’s mostly stories. Not... direct information.”

“Like how some stories about heroes will teach you a bit about how to fight, and some history stuff too?” Felix asks.

“Exactly. I can see why the necromancers stole this one. It’s a lot of allegory, and I think most of it is probably useless, but... well, maybe it’ll teach a necromancer how to better apply their own skills? You know, give them examples to work from.”

I nod along. That seems reasonable.

“Anyway, the fourth story in here is the tale of Hector Collado, who was a necromancer about two centuries ago working from the Vulture Plaines. He took out three entire towns, turning everyone there into ghouls before Heroe’s Templars found him. He died, obviously.”

“What’s the story then?” I ask. I’m going to start the next monster creation, but I can listen and work at the same time.

“It’s a long story. But the main bit’s at the start. Hector found a way to create undead that can create more undead. It took a lot of sacrifices, but his plan was to start with a few towns, then take over a city, then go from city to city until everything was undead.”

Esme nods, but I sense a soft ‘no’ coming. “How long does it take you to make a monster?”

“It depends on the size and complexity. Ten minutes, if I know what I’m doing? Twenty on average, I guess. Tiny monsters I can make in a dozen seconds.”

“It’s longer for a necromancer to make a ghoul or zombie. Even if Altum’s cult has a hundred in the city, they can only raise about a hundred people an hour.”

“And there’s thousands of dead in Algecante,” I say. The math makes sense, I suppose.

“So, they’re making these undead-making undead?”

“I think they’ve made them already,” Esme says. “And I also think that they’re spreading them around.”

Am sick. nn. Might have to scale down my posting next week to make up for the chapters I'm not writing this week. 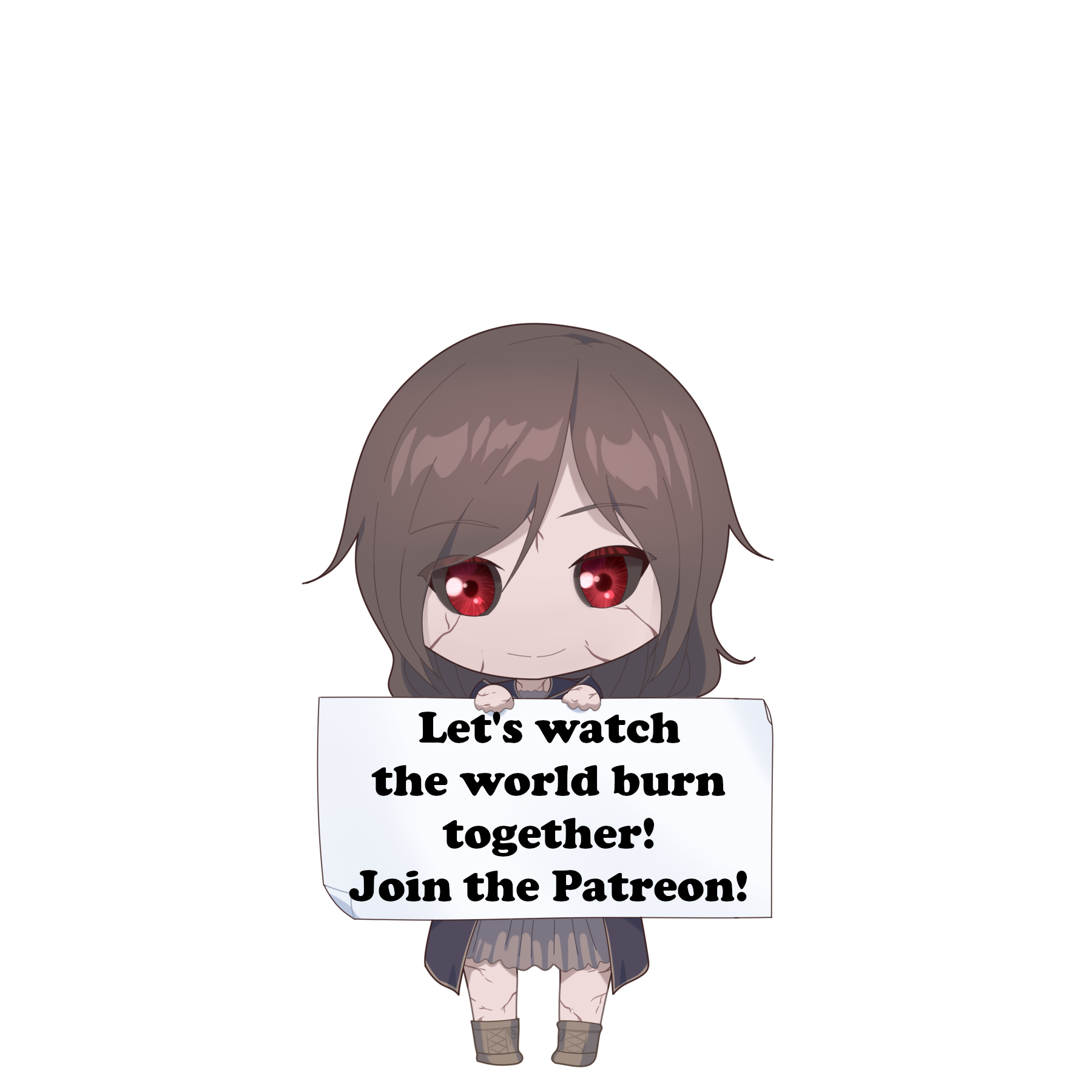