I groan and pick myself up from where I must have fallen in the hot sand, pushing down on the wet clumps with my...

That can't be right, can it?

I was, not to sugarcoat it, way the hell out of shape. A sedentary, low-paying job like dronelivery rigging for a Tote-Em-Snax will do that to you, especially when most of your diet needs to be the shit from the heat lamp display and slush dispensers that the konbini would otherwise throw out. I was fat; my roommate, Jules, got lean from getting around on a bike.

Self-deprecating jokes about how "round is a shape" aside, I absolutely should not be as strong as I feel; especially through the brainfogging, hangover-like fatigue pressing me down.

I bring a hand to a belly I could grate cheese off of and can feel core strength I never had, even during my misspent youth on a basketball court, and in soccer cleats.

I rock back to kneeling, then hoist myself up, shaking sand out of long red hair I don't think I should have and three furry red tails I'm sure I shouldn't have, and look up, one clawed hand over my eyes to shield myself from the too-bright rays of the sun.

I glance left and regret it, white reflecting off of endless rolling glass-green waves; I smell sea-salt and grasses and coconut and palm, hear the skittering of crabs.

And I snap to attention, taking a deep breath.

This isn't Earth; this isn't even IRL.

This is a place in Mundus, in Another World Online.

"Must have fallen asleep with the 'Helm on after the release party with DC/AC," I mutter to myself. "The haptics went a little nuts."

I bring up my own character sheet - which I can still do, apparently.

And yes, my friends gave me shit for it. I was a dude going straight for the 6-foot plus shredded foxgirl, I was gonna get razzed. Given that the options were two furry species, one scaly one, the flying potatoes, the elementals and - of course - boring old humans, I wasn't terribly ashamed of embracing the AWO(o) spirit and going full gumiho.

It's not like it meant anything in the real world, right?

I scroll down a bit - and frown.

"What the hell?! I was one quest away from the new cap last night, what the fuck?"

I flip the page and double check.

Deedee's equipment loadout, stats, Boon, Perk and Techne choices were correct for first level - max Vigor, max Spirit, dumpstered Resolve because I was a support, not a tank, and didn't need the extra HP; and my abilities were centered around charging up my healing spells by dealing damage - but all of it was a starter build.

My friends in Free Company Dungeon Crawling And Chill were high-level raiders, fighting the dungeons with the Divine Beasts on Valiant difficulty for fun. There was no reason to get nerfed this badly.

I try to log out - to send a support ticket.

"You know, I've seen enough anime that I should have known where this was going," I say, laughing.

But only because the alternative to laughing is worse.

Say what you will about busting your ass for a convenience store, at least that's safe. I was now in a world with dragons and monsters, where an adventurer - where I - was expected to get together with a mercenary company for Crown-sanctioned murder.

Which was why I might have been hyperventilating a little when I checked my equipment.

First off, I checked my clothes. I was wearing handwraps, legwraps, sandals and - I winced - chestwraps of cloth in Sylphan's faded sky blue, with a light jacket in saffron. A talismanic armor set - not great against physical blows, that was my job to parry, but theoretically proof against magical attacks.

God, things were going to throw Elfshot and fireballs and lightning at me. Fantastic. Breathe, Jake.

I did see my backpack a little further up the beach, and my stuff hadn't scattered to the four winds yet, thank god.

Possibly literally. Part of me suspects that Sylphan wouldn't let it said winds scatter my stuff, if I was one of His favored Clerics here - a thought that only sort of bothers my Jewish sensibilities.

It's a regular backpack, not a Marvelous Merchant's Pack - not yet; I do recall that you get that from the quest line with Tayeb (you know, the Jovial Merchant), so I'm less bothered by the loss than I could be.

I rifle through my pack. It's all starter equipment for a Cleric going down the Monk subclass tree. Not ideal, but not terrible.

Apparently snapping your fingers and saying a catchphrase like Magical Astra, Champion of Stars doesn't start a transformation sequence, so I spend some time equipping myself. First I find the prayer beads marked with the tail of Sylphan (useful for focusing your spells and also acting as a ward), then grab my staff and lash a glaive blade to it.

I'm, at least, not unarmed on the Shores of Awakening.

I test its heft, whipping it around a bit, the movements coming back to me as they did when I was guided by the haptics of the Neurohelm. Then I experimentally throw a punch, and my voice, in a kiai.

It feels good. Proper, even; it felt solid and graceful, and this body apparently knows how to follow through, putting me through a set of dance steps I didn't realize I had absorbed from playing Deedee with the haptics on. It feels right, feels reassuring.

And I'm not entirely sure why.

So I go back to my stuff, cataloguing out loud.

"That's not gonna get awkward at all, nope nope nope," I say as I rummage through the rest of my stuff to distract myself.

All basic as you can get equipment.

It's then that I hear the screaming.

My ears twitch, swiveling towards the sound (and that's WEIRD, even if it's HELPFUL) - a feminine scream, hitting that soprano note.

I find myself bounding towards the sound of the fight before I can stop myself - and with a start, I realize that no, I'm actually bounding.  I'm bouncing around like I've got wires strapped to me, vaulting using the butt of my glaive, Sylphan's winds rushing around me, lifting me up.

I can't help it; I laugh and whoop at a physical sensation I've never before, one my fat ass would never be able to do IRL.

Right before one of Deedee's tits smacks me in the face. 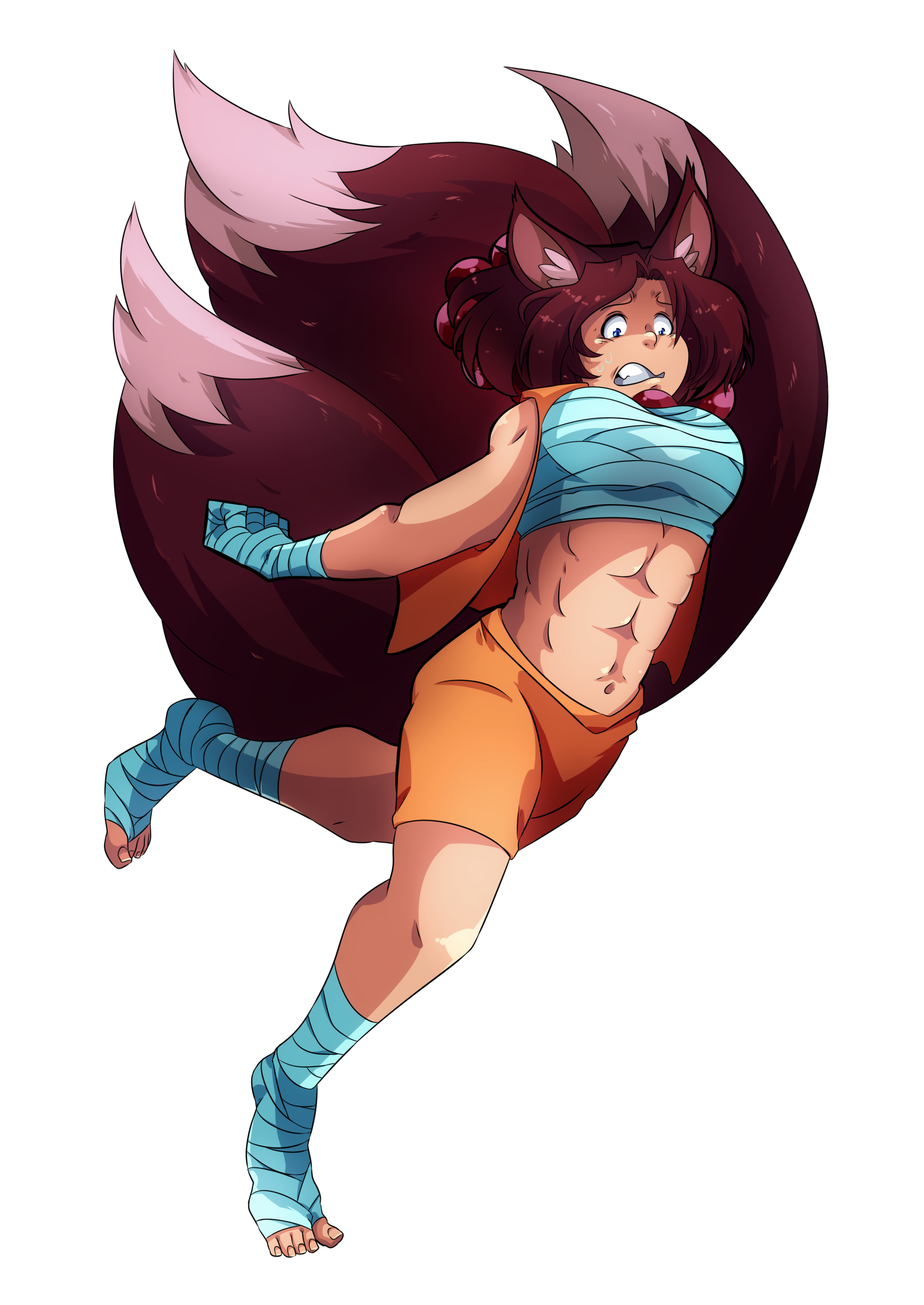 I have just enough time to wonder why I didn't put more points into her Agility before I trip.

This tastes familiar, I think to myself as I pull myself up - and promise myself not to run full-tilt like that until I have...

"Call it a more visible means of supporting myself," I mutter.

And realize what it means.

Whatever brought me into this world, it didn't bring just me.

And here we go.

First off, this isn't my work alone, though I did come up with most of the idea and did most of the writing: my cowriters Bii and FoxHana contributed a lot of major characters and concepts, too, as well as Bii designing the logo; and the art isn't mine either, being work I commissioned and paid for.  This chapter's illustration is by the talented MakioKuta.

If you're part of Sufficient Velocity this might be familiar - I did say that Deedeequest was going to be a rough draft for a story I published later!  The main differences are going to be the use of first person and giving Deeds a glaive to enable further acrobatic nonsense.  I will otherwise respect the direction the story is taking in the DDquest thread, which will - necessarily - be a volume or so ahead of this more conventional story.

So! Readers new and old, please enjoy Isekai/Online - or, if we must use a Shōsetsuka ni Narō - ass subtitle, I Woke Up In Another World As My Busty Foxgirl Avatar And I Think I Prefer It Like This?!

'Cause I had a blast with this, and I hope you do too!

35
Support Isekai/Online V. 1.0: Reborn On The Shores Of Awakening