My last memory before coming here was logging on to try out the new DLC with the rest of the Free Company.

As I vault towards the other adventurer's battlecry, I check my ear with my hand.

The earring - and its sendjewel - is still there. And that means I'm no longer alone here.

Everyone else in the Free Mercenary Company, Dungeon-Crawling And Chill, was there for the release party for the Pepper, Silk, Gunpowder and Rum expansion - all of us knocking back virtual cider, ale and vino at El Jarra del Dragon in Viacruz.

And if they're here too, they might have a better idea of what's going on - or at least a different piece of the puzzle.

With a simple hand gesture, I unfold the 'address book' of the sendjewel, and confirm - with mixed feelings - that at least three more of us are online, which is at least four of us too many. Raldulf left early, like he said he would, thank God - something about a sociology paper in the morning - but my roommate Jules as the rogue Sekhmet, and our wizard Hikaru, and the oathsworn Alesha are here.

Alesha Herezhade - my best friend in the guild; our warmaster and the party tank in Mundus, a social worker in real life.  Someone I've confided in before, about being bi and losing my father. 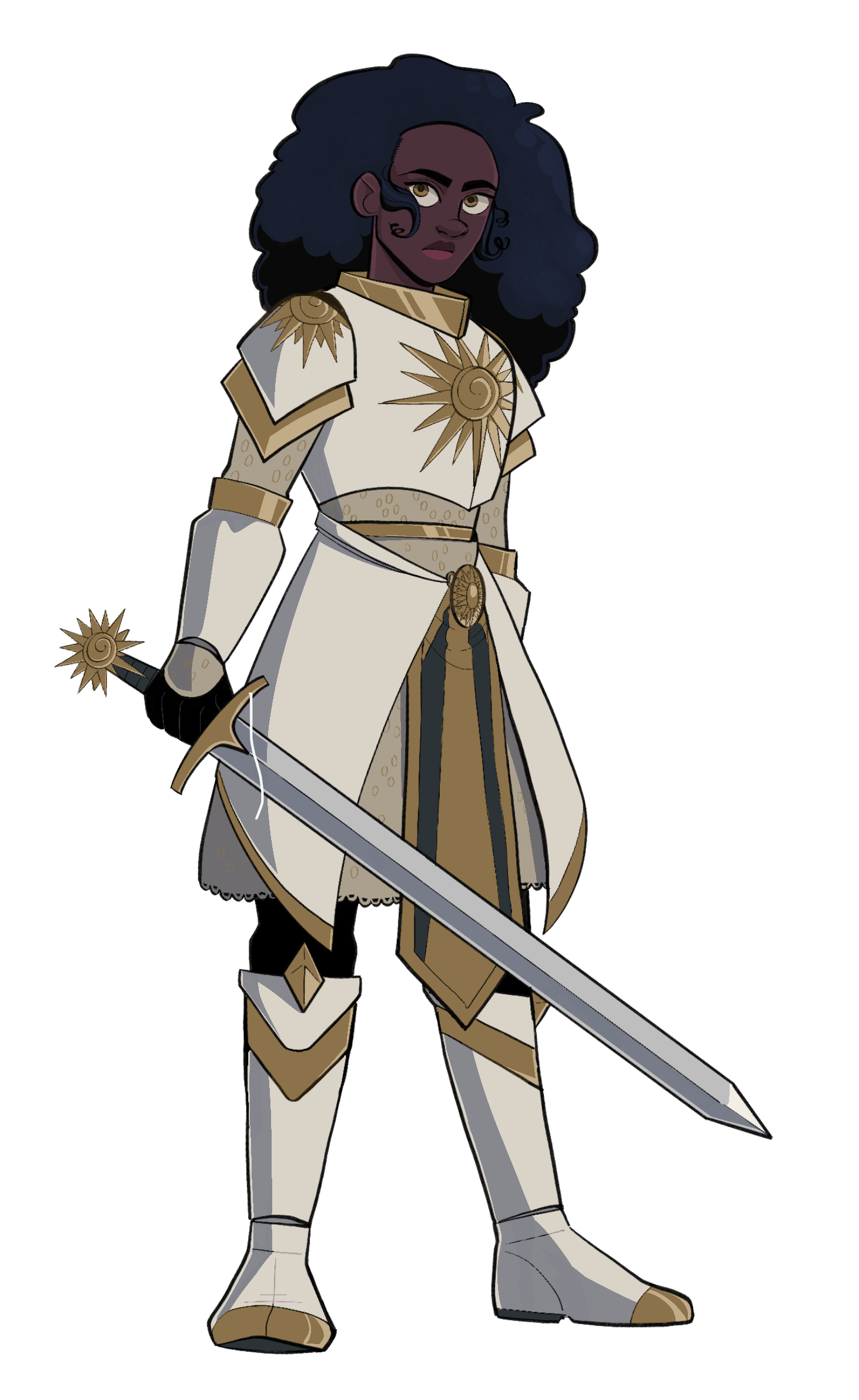 If anyone has a handle on the situation, it's Alesha.

And, not to put too fine a point on it, but I'm fragile and have no desire to test if resurrection mechanics work. Especially since I haven't seen a balefire or soulstone crystal yet and have no idea how I got here.  It's her job to put 200 HP and a ton of armor between us and death, and she's good at it.

I'm not sure if people die when they're killed here, and I refuse to find out the hard way.

I call Alesha on the sendjewel array - not hard; the name with an "A" puts her near the top of the list. The hope that she'll pick up is soon answered by her mezzo voice speaking through the jewel into my ear, surprisingly bright given the situation:

"Deeds! We'll have to wait for pleasantries. Are you alright? What have you figured out?"

I swear my voice cracks. "Can't log out, for starters. First level, starter equipment, not alone - I'm trying to help someone else who I think is in a fight, bounding towards them -"

"At 2 mana a bounce?" she chides, and I immediately feel stupid for not thinking of that.

"Uh - that was sort of instinctual, I wasn't really thinking clearly," I stammer, actually feeling my ears flattening.

"Don't beat yourself up too much over it - it makes you easy to spot, and follow."

I'm not sure why that's as much of a relief as it is, but it is one, and her marching orders help you focus.

"I'm heading your way and partying up," she tells me. "Any idea what we're up against, who we're saving? Or where the others are?"

"No idea, I just heard girlish screaming and yelling," I answer, and it sounds lame.

"Ralph's out, like he said he'd be - just his luck. I picked up Hikaru and Sekhmet and a few others- didn't look long."

"Hikaru." I hear her hiss a breath in between her teeth. "Hell, I don't think he breaks double digit HP; we need to see if he needs help immediately after this. Sekh can probably take care of herself for longer."

I had thought of that, briefly, but at the reminder I wince and make the Sign of the Fox - a gesture I didn't think came naturally to me. But there's no time to worry about that right now.

(Or to correct her about Jules being a they, not a she, especially since they never corrected Leesh as Sekhmet - at least not that I'm aware of.)

There's another scream, fierce and ragged, and I pivot towards it, bounce again and look down. A flash of red, black, and steel pursued by something large, red, and fast - and a series of blue floating blobs.

Out of the corner of my eye, I see blue, white and gold steel and flowing dark curly hair, converging on you both. Alesha, Paladin of Aurora, to the rescue.

"Think we have too. You'll be there before me - Get her name, add her to our party."

"Don't you start with that shit," she says, fondly. With that I see Alesha's status bar fade in at the upper-left of my field of vision - mostly pink and teal with a hint of gold; reassuringly topped off on health and pneuma, and starting to build Tension for the battle to come.

The girl I'm coming to rescue swings some kind of heavy weapon, and that is when I grit my teeth and make my move.  I pivot my hips and direct all of my weight in a way that shouldn't be familiar, but is - launching myself into a terminal descent.

(I need a belt for this.  Something ostentatious and overdesigned.)

I land, heavily, on top of the girl's warmaul - driving it deeper into a crab the size of a Volkswagen Beetle, to it's dismay - and the girl's shock.

Her blow would have already cracked it's shell; my weight drives it messily through the creature's brain, as I crouch into it, linger for half a second, then launch myself again - off the hammer and next to the very surprised woman.

I roll my shoulders and my neck, raising my hands, getting into a proper stance.

I didn't know bodies could do that - much less my own.

And then I turn towards the woman I rescued - and somehow manage not to stare at the steel bustier she has instead of a proper breastplate, instead very deliberately locking eyes with her, nodding, and turning back to the battle.

You know, before she can see me blush. 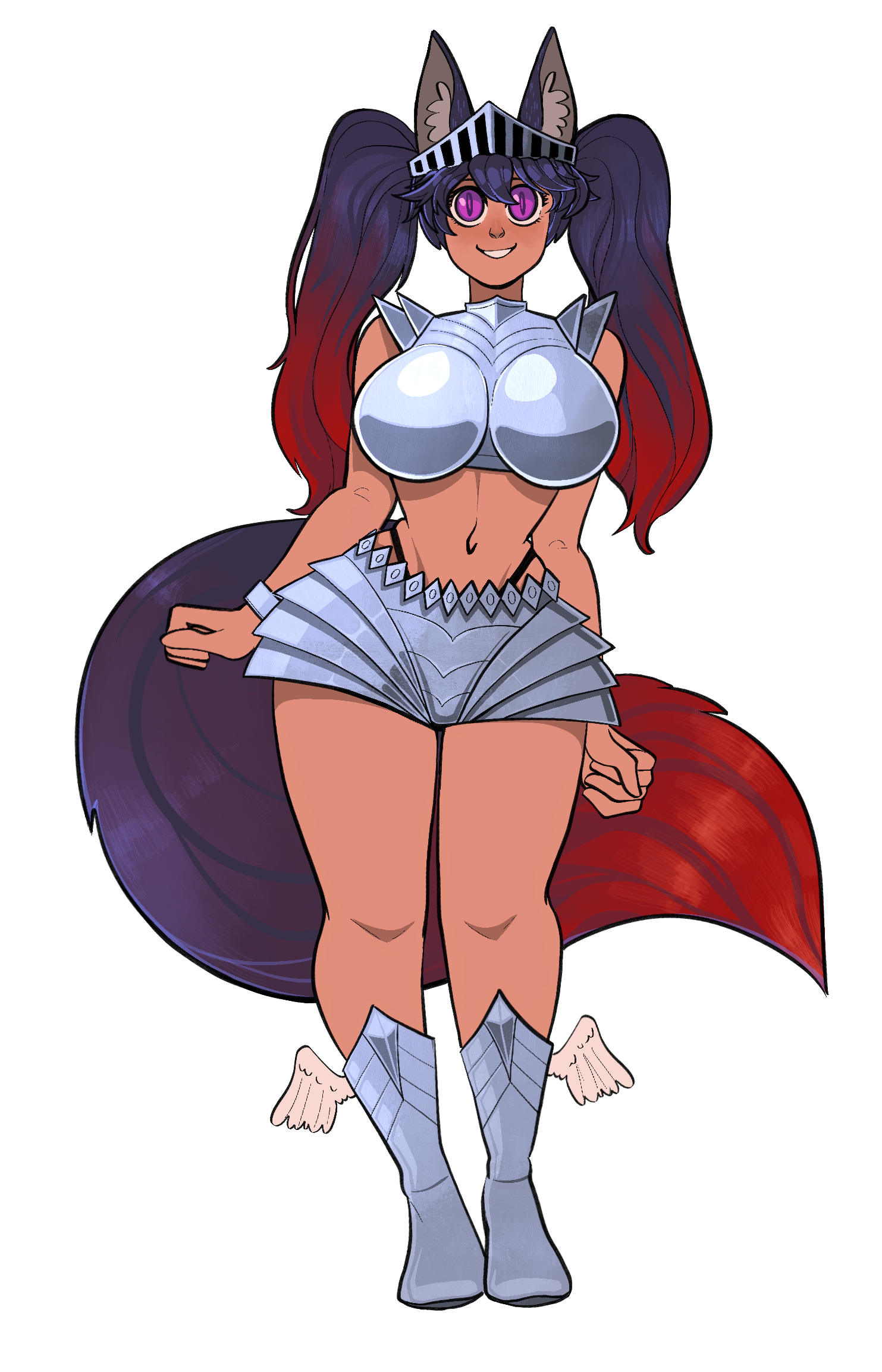 ...And right now, even if my emotions are running high, that's less important than the fact she's outnumbered and her bare midriff was injured and she needs your help.

And it's definitely no excuse to turn into the kind of stammering teenage creep I was, going to cons a month after I got The Fucking Vaccination.

I tilt my head her way and flash a smile, powered by the incredible high of that sick dunk. "Looked like you needed help, thought I'd drop in."

"Get new material," she says, playfully, smiling. Her voice is... smokier than I expected on a frame that short. "But I do appreciate the help, it's the best thing that's happened since I got here."

I tip my palm to her as if to concede the point, then open my mouth to introduce myself.

And choke on 'Jake,' my real name.

Maybe it's best to use avatar names here?  It's only logical, I kind of am my avatar here, somehow? Besides, you need an avatar's name to party up, not anyone's real names...

"Call me Deedee," I say, fast enough that she probably doesn't notice the slip.

Now it's her eyes giving my new body an appraising once-over - and it feels weird, more intrusive than I'd expect.

"I didn't expect I'd have to stick with the name," I blurt out, ears flattening - and then backpedal away from an advancing floating jellyfish.

I knew when I came up with that name that it was a dumb joke.  Jules nee Sekhmet called it out as one, and I did it anyway.

She steps forward. "And I thought I wouldn't actually have to wear this stupid outfit, so I guess we're even."

Her swing at the floater misses by inches - and her hammer pulverizes a coconut under it. She hefts the maul, still dripping coconut water, grunting.

"Call me Ace," she says. "Ace Striker. Now can you tell me what the hell is going on?"

Right. With a flick of my hand, I add her avatar's name to our party and send the invite. Her eyes twitch, slitting; her black ears perk up and her black and red fox tail start to swish.  She nods at an invisible prompt.

She's joined us. I glance over; Alesha is power-walking out of a coconut grove towards us as fast as she can, which isn't fast enough.

Time to figure out a plan.

I can catch my breath - and talk more with Ace and Alesha - after we win this fight.

Ace Striker and her role in the story is mostly the work of FoxHana, rather than myself.

The illustration in this chapter is by Bedsafely, who also took my terrible writer art and made actual character designs out of them.

Thanks also to Bii and Nerdo for proofreading this.

22
Support Isekai/Online V. 1.0: Reborn On The Shores Of Awakening