I wince, but don't try to move Hikaru without knowing how bad he's wounded. Or what he fought. Or how much Breath he used up.

I do blow some Healing Wind in his face, and that gives him strength enough to stand up, and crane his neck up at Alesha and Ace's concerned faces.

"Impeccable timing, Hikaru." Alesha says, sighing relief. "We had a bit of a crisis, or we -"

Hikaru waves her off, before wincing and grabbing his side.

"- or you wouldn't have put on your own mask before assisting others?" he murmurs, his breathing ragged. "Given what you knew you acted entirely appropriately. How did you link up?"

I tap my sendjewel and try not to say a goddamned word.

I should have called him first.

"Ah," he says, and it speaks volumes. He sits, levering himself down with a large wooden cane. "I should have tested that immediately, but I'm hardly immune to panic, I'm sad to say."

Ace offers him a hand; Hikaru hesitates, then takes it, hesitates again, shakes it. Judging by her flat-eared look, she didn't quite know what to make of him.

"Think you saved us a lot of pain, shrimp," she says, and I cringe.

Hikaru, for his part, smirked back. "I think you'll find the term here is potato. Also, you -" he winced. "-seem to have me at a disadvantage; I know the others, and they you, but I would have, uh, remembered a face like yours."

Ace took half a second to process that, a second I took to very audibly facepalm, before she laughs. "If it's this face you're remembering I think maybe you're the real ace around here."

I drag my hand down my face.

"Granted," Hikaru says very slowly, "but I'd like to point out that purple, slitted eyes, especially ones that large, aren't common even in this kind of game."

"Why don't you introduce yourselves," Alesha interjects.

"The LPer on Castr?" I ask, if only to prevent more tasting of shoe leather.

At that, her expression gets a little wistful. "That's the last time I let any of my fans talk me into playing anything."

"Such as the elegant, tasteful avatar?" Alesha says, almost succeeding at not smiling.

Fortunately, Ace laughs. "No, that was me doing a bit. I set out to make the most ludicrous anime tittymonster the sliders would allow... and I succeeded."

Her gesturing as she says that makes it hard not to stare at her, but I manage to look at my wounded patient in Hikaru instead. For his part, he seems amused.

But then, he would be.

"Don't tell me this was your first time playing?" I asked, hoping my voice came off as concerned rather than... chirpy.

She sighed, dropping her shoulders. "Hadn't even shelled out for a sub. Probably wasn't going to, before -"

Ace indicated the beach, the interior of the island, the corpse of the crab and of the jellies. Hikaru nodded.

"Bad luck," he said. "I'll do what I can to help you. We -" he cleared his throat, wincing again, "- happen to be a progression guild, high level players... if not presently high level characters. We'll help you survive this."

Alesha put a gloved, gauntleted hand on her shoulder. "If there's a way, we'll get you home."

I sighed, and tried to smile. "Promise. I won't leave you hanging. We won't," I corrected.

"Thanks," she said, flopping down. "Didn't expect to meet a fan here; I don't... usually go in for VRMMOs."

"I'm not so much," I say, chuckling. "But I recognized you from my roommate's rotation of Castrs, and -"

The bottom drops out of my voice.

Ace, of all people, grabbed me by the shoulder and looked me in the eye. "They're here?" she said, very quietly.

I nodded. She turned to Alesha and Hikaru. "You know them?"

Hikaru nodded, slowly. "Sekhmet Clanclan," he said, "is a Rogue with Survival, Stealth, and the Boons of Flamma - meaning additional potions and the means to make more, among other things. If she can use that, she can avoid combat and be fine. If she can't..."

He shrugged - and hissed as he clutched his side. I flinched toward him.

"Considering the amount of panic to go around," Hikaru said, "it would be wise to locate her and make sure."

"Not while we have wounded," Alesha said. "You, and Ace both. We need rest and you need potions, maybe a night's worth."

Ace folded her arms. "During which time Deedee's roommate could get a ticket to the Crab Rave?"

"At least an hour if not more," Alesha insisted. "If you and Deedee want to go off and look for her, I can heal Hikaru. But I wouldn't recommend it.

I hold my hand up - this isn't easy and three friends arguing over it won't make it easier - and wait for the others to acknowledge it.

I think it takes less than a minute, but not by much.

Ace raises her hand to protest.

"Warriors can tank - if you build them the right way.  Which means, not as a Berserker," I say to Ace.

Ace folds her arms and looks away. "Goddamn it," she says.

I look at my hands and try to hide the nervousness in my voice. "I can do... more intensive healing.  As long as we're burning time, and if she can take care of herself for that long, I can hold out long enough to get Sekhmet to us with a full party."

That would involve breaking out the oil and anointing the hell out of him, a literal laying on of hands, and my brain has decided now is a great time to imagine a broad back in vivid detail, and that isn't helping but...

But it's the least bad option.

Ace frowns, arms still folded, but nods. Alesha lets out the breath she was holding in; I swear she lost an inch.

Hikaru is looking at his shoes and that's not fair, it's not his fault this happened and I didn't call him first -

I shake my head. "We take an hour, not much more. Break out snacks, break out water, I'll get my healing supplies. Could you set up a medic's tent while I get Sekh on the line?"

This is mostly so Ace has better things to do than worry, but it seems to work, at least - though she keeps looking at me like she wants to say more.

I turn away from her - I have to - and shrug off my pack, and feel the weight off my shoulders. I gesture to invoke the Sendjewel, scrolling down to the name Sekhmet Clanclan, and call her.

"New earring, who this," is the gruff reply; Sekh's voice is deeper and rougher than Jules', a deliberate choice. 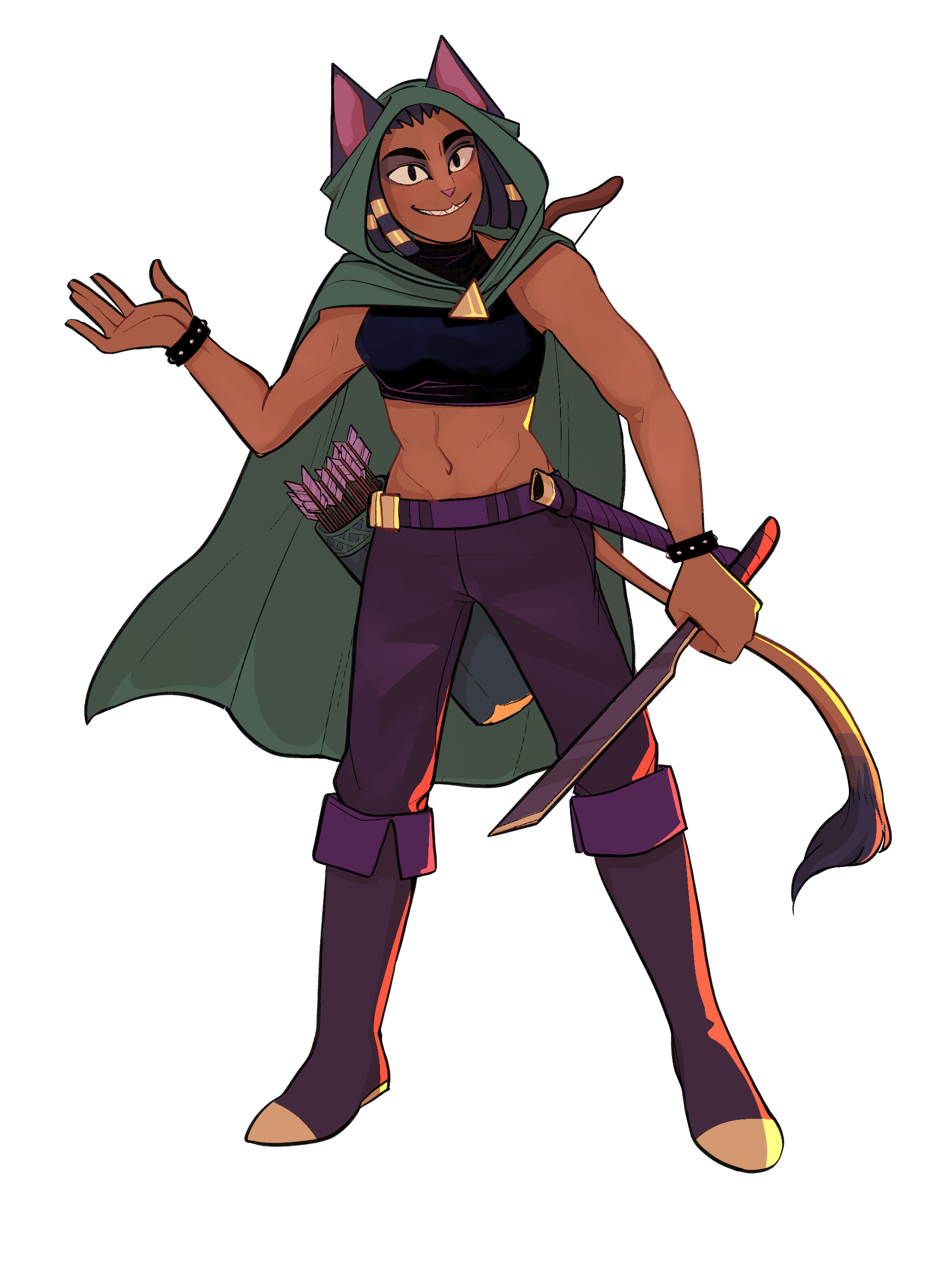 And I breathe a sigh of relief.

"It's De-" I grunt, reconsidering.

A long moment of silence makes me worry the connection somehow dropped.

"That tracks," Sekhmet replies. "God, it's one thing hearing you in the same room, it's another to hear Busty Vixen's alto saying your lines. You safe?"

I hadn't even registered that my voice was higher, and it distracts my from their question for a moment.

"I'm fine," I assure them. "Hikaru is with us and hurt bad, or I'd be meeting you right fucking now instead of patching him up. Are you safe, how long can you hold out?"

"Bitch you know I can take care of myself," they say, suppressing a cackle.

Which they wouldn't bother to do if that wasn't bravado. Jules is nervous; Jules is fronting. Even with Sekhmet's catlike tread, it can't be easy for them to stay hidden.

"I know you can, but we're gonna help you out anyway," I insist. "That's what friends do, right? You can pay it forward later, you'll never guess who we met who was immediately down for murder if it meant helping my roommate."

"One hour, maybe an hour and a half," I promise, not trusting myself to answer them. "Give us a sign then, we won't leave you hanging."

After a moment, I hear movement, and a sigh. "Never thought you would. See you after my shift."

Referring to Flamma, the goddess of the Bastim - and fire - and alchemy.

"Are you grinding potion ingredients?" I ask, my voice lilting in surprise.

"Among other gigs.  You'll see in two, Deedee."

Then Sekhmet cut the connection.

I take a deep breath. When I see the look of concern from Ace - finishing up the tent - and from Alesha, I give them a thumbs-up and half a smile.

"Trying to pay for our inn beds with potion ingredients, but that's normal for her," I reply, looking through my pack for a pair of bottles and the incense burner.

Ace gestures toward the tent, expression more serious than I've seen on her before, and Alesha helps Hikaru walk to the tent.

I waste no more time before joining him.

For some reason, this ranked top 25 in Roommates before the roommate even showed in the story.  Well; here comes the roommate, hello there, welcome, there they are, they are here!

Art is again by Bedsafely.

20
Support Isekai/Online V. 1.0: Reborn On The Shores Of Awakening