Hikaru is a mess, with a lot of blood in his clothes. Most of the damage is to his side and leg; severe burns, deep cuts.

I'll be damned if I know from what, though I can guess it was monsters - but it's very bad. If he didn't have absurd adventurer resilience he probably couldn't walk, and he probably shouldn't try.

I wish I had actual medical training rather than just camp counselor first aid and CPR certs from my teen years, right before everything went to hell. But that and magic will help.

“So on the one hand, this is probably going to hurt like hell,” I warn him.

”Granted, but I’ll pick a single instant of searing agony to lingering, debilitating pain any day,” he said, as he carefully - carefully - levered himself to sitting.

I start by casting Healing Wind and putting a hand over his actual wounds until they stop bleeding. He grits his teeth and hisses in air through them, his wings flitting involuntarily... but then he exhales, and goes limp, and even laughs.

"Better?" I ask, hand still on his side.

"Much. Not well, but better." He looks up at me and smiles, and it makes me feel things.

Things I absolutely refuse to let get in the way of helping this man who's been my friend for two years. I refuse to let feeling like I'm at the fucking prom again for some reason fuck that up. Though given his sense of humor...

"I will heal your wounds and comfort your weariness," I intone, too solemnly. "Close your eyes and concentrate on not getting a boner."

He laughs, and then winces.

Then sigh. "In seriousness, you’re probably going to need to take your shirt off, and I'm not gonna let this get weirder than it needs to be, and I’m sorry about that.”

Hikaru immediately nodded, slowly, and undid the buttons on his shirt. “I’m not sure what you have to apologize for,” he said in that level voice of his. “Circumstances aside, I don’t think a lovely lady laying hands on me is quite the ordeal you imagine it is.”

”Which would be great if we could find one,” I say, looking at the ceiling of the tent. “I’m a lot less lady IRL. Mom says I’m lovely, so there’s that.”

”Ah,” Hikaru says. Then - without missing a beat - he adds, “Your mother is not wrong.”

I roll my eyes. There’s no point talking about it, so I stop, and help him with his shirt, and lever him face down onto a blanket. The wounds themselves have closed, but I need to give him back energy - magic, Pneuma - to regenerate quickly.

"Man, I'd pay money to see what an MD makes of healing magic here," I mutter.

I press hands coated in a warm, enchanted oil into skin, muscle and tendon and he allows me to press him into the earth. I knead it in, drum it in, let the both of us zone out and feel and heal.

And, yeah, I'm enjoying this for reasons above and beyond being able to help. But also because I can help.

It takes me a moment to realize Hikaru said something and I stop, hands pressing on his shoulders. "Say again?" I mumble.

”...and on the second hand?” Hikaru murmured.

I could feel my cheeks burning.

“Just... I’ve been distractible lately. Everyone is hot.”

why am I saying this how have I not combusted

stop. cease. do not!

"I mean, you're cute, but I'm just... I'm definitely not normally like this and I hope you don't mind, I'm trying not to let it get in the way and -"

He holds up one hand and I shut the fuck up like I should have.

”In case you haven’t noticed, we all have proper art direction now,” Hikaru mumbled, rolling his back. I find a trigger point and he grunts, before sighing into his pillow. “Also... how do I say this?”

I purse my mouth and frown but let him speak.

“I imagine that most of the playerbase is fairly sedentary," he observes, "as most of our avatars are not.”

Hikaru nodded, quiet, as he let me work, but I could tell he wanted to say something else.

Right now I trusted it wouldn’t be unkind. Even if I didn’t have him at your mercy, Hikaru would try to be... charitable, at least?

And it was nice, being able to do this for him. 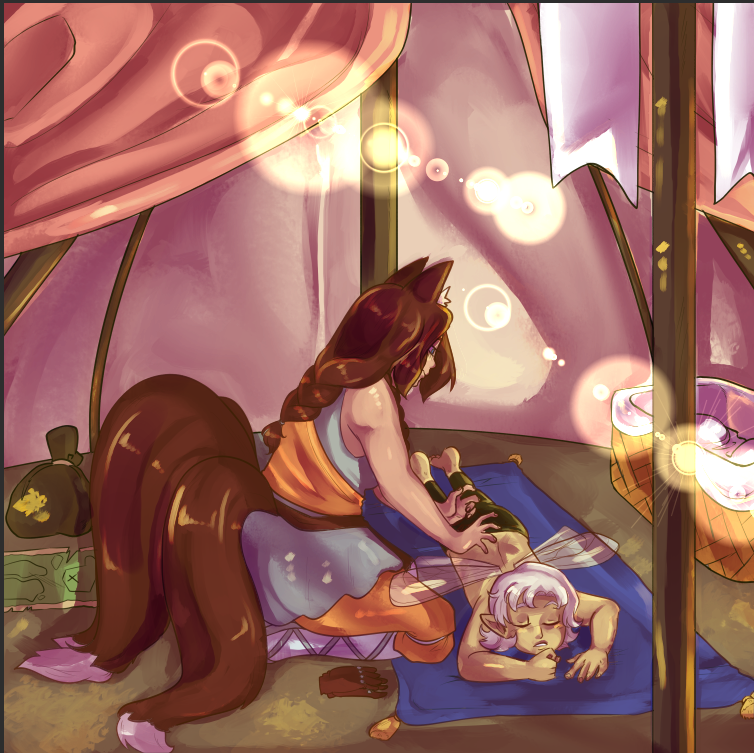 To heal him. That's what I meant.

I finish his back and he rolls over, very deliberate with where he places his wings.

Not like, a shredded six pack.  There was the hint of them, reflecting his minmaxed Vigor of 1, but I wasn't really expecting a pixie to look like...

Maybe I should have? It’s not helping me deal with being twentysomething and in better shape than I’d ever been.

Somehow I do not say that aloud, panic, or stare: I just do what I need to do for his wounds and healing, unfurling my fingers over his belly and then sliding them up, to fully anoint him with the healing oil.

"But on the gripping hand,” he says, very softly.

”We’re telling three-fisted tales, now?” I say, keeping my breathing square and even, the way Dad taught me how.

”On the gripping hand,” he repeats, locking eyes with me for just a moment, “in my case, at least... finally having the proper endocrine system helps.”

Don’t know what to say to that?

What he’s saying to me.

He chuckles. “I’m not exactly pleased with my, hmn, loss of stature, but I will take what testosterone couldn’t quite give me as a consolation for the inconvenience.”

Flattered. Touched. Jules had... made it clear that wasn’t something to be dropped on a presumed friend lightly.

”I’m not sure why you’re telling me this,” I say, “but thank you for trusting me not to be a shithead about it.”

He looked at me for a moment, then nodded.

“I see,” he said. “Shall we say I’m an expert at not feeling quite myself, if you need one?”

I rock back to my knees, and he blinks, and stretches.

After a moment's consideration, he hugs me.

I'm surprised at... the lack of surprise, really, but it's not unwelcome, and I put an arm around him for a moment.

"Let's find your roommate," he says, grabbing his shirt.

"Gladly," I say, exiting the tent.

With thanks to Snickerdoodle for the art and apologies to the Game Grumps for the bit.
16
Support Isekai/Online V. 1.0: Reborn On The Shores Of Awakening