I wake up, jumping up to sitting, breathing hard.

I'm still in my tent on the Shores of Awakening; waking up didn't log me out of this nightmare.

I still have tits.

I'm still the dumbfuck that named my avatar after them.

It's only just past dawn, and the sun seems a little too bright as I exit my tent with my bag - it strikes me, an anachronistic bag. But then, the Mundane Phantasy Historia that the subtitle of AWOo promised did always pull a few strings to get things in the hands of markets and players early.

I'm not the first one up. I'm not the last, either, thankfully; I see Alesha cinching up something on Ace's armor, talking to her with what seems like fond exasperation. 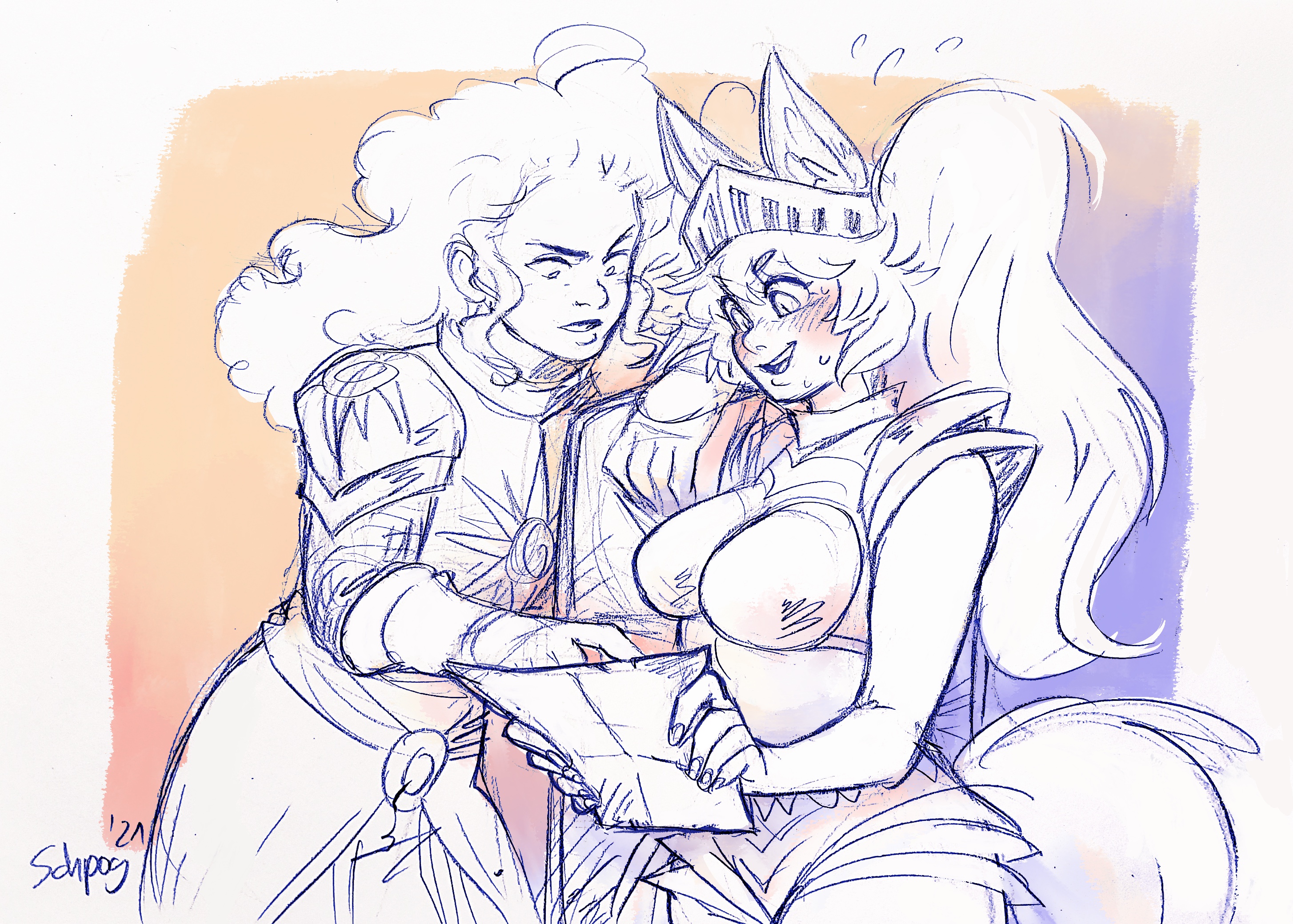 I note with a little amusement and a lot of sympathy that I'm not the only one who cannot fucking weave when Alesha has our attention; Ace is trying to hide her face, but she's a lot more subtle about it than I am. I suppose Leesh just has that effect on people. That, and her openly talking about her ex-wife encourages girls, I suppose.

Wait, Ace wasn't around for that. Where did that thought come from?

"What's shakin'?" I ask, and Ace whirls around quick enough for her tail to nearly clock Alesha, who barely raises a hand to deflect it. She laughs it off before Ace can turn, mortified, to apologize.

"Turns out that Ace wasn't wearing her arming jacket with her armor," she says, "and I was helping her fit it properly."

"Look, I don't LARP because I don't want some pasty self-proclaimed Duke of Neckbeard hitting on me," Ace groaned. "How the hell am I supposed to know how armor works? I didn't study real demolitions before doing a one-off Boomtown Deathmatch livecast."

"No one is blaming you for not knowing this," Alesha tried to assure her. "I'm just a nerd."

"It's true," I add. "Most of us who ended up playing for the long haul are. Some more than others. Speaking of," I say, pointing towards the rustling flaps I hear from the small tent.

Hikaru rubs his eyes as he leaves, mumbling something under his breath. He looks a little out of it, really; he seems the type who got going with coffee IRL. Alesha glances over, frowning, before glancing back at me - then nods, waving to Hikaru. He mutters something that could be either a greeting or a curse; I'm not sure which, and his gesture is equally ambiguous.

"And now all we need is breakfast, and a plan," I say.

"I got both," Sekhmet says from right behind me.

I jump, turning to them at the firepit. They hold up and waggle a pair of plucked ducks, the feathers strewn in the pit.

I have no idea how they snuck up on me.

"Yo Ace, you mind cooking these?" they ask. "We all had thirds of the last thing you ate -"

And she's already looking through the rest of the supplies, thinking out loud of how to do this over a campfire, bright eyed and smiling and wagging her tail.

Oh no that's adorable tho?

Hikaru, meanwhile, looks up at Sekhmet with a hand over his chin and a finger stroking his (tragically absent) mustache. "Those looked like domestic ducks," he says.

"Sure are," they reply, reaching into a pouch. "Feral ones. Pretty sure there are rice paddies here along with sugarcane farms."

They produce a piece of parchment - a map. This has my, and Alesha's, immediate attention.

They say, "I am pretty sure I know how to get to the Costa Dulce fort from here, and actually progress through the goddamn tutorial."

Ace cooks, we all eat and thank her, and then we pack up and make our way - Sekhmet leading us through the jungle and trailblazing, long knives in hand -

- when my ears twitch and I hold up my hand for everyone to stop.

I heard something, and my brain won't let it go.

"What's the hold up?" Ace grumbles.

"In a dragons 'n castles game?" Ace sounds skeptical, but her flattening ears betray her.

Hikaru sighs. "It could have been a lightning bolt... or a flintlock. Or a distant cannon. This is a Magical Renaissance setting. We are, as of last week, on the piracy expansion."

I start walking again, deflecting slightly away from the old path. I think I hear something again, no closer thankfully -

"I think maybe we should avoid the road," I say.

"Can you keep us hidden?" Alesha asks, her voice suitably lowered.

"I oughtta try," Sekh replies, squinting at their map.

Art for this chapter by Schpog.
7
Support Isekai/Online V. 1.0: Reborn On The Shores Of Awakening