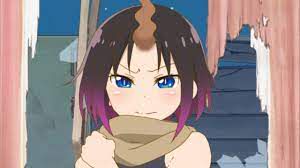 The camera opens up to Smaug laying on the couch and Kobayashi looking out the glass door. The Kanna walks up.

Kobayashi:*Gains a tick mark then stands up.* "Oh? Is that so?"

Kobayashi:"Hah! I'm better than the best."

Tohru:"I'm even better than that."

Kobayashi:"Oh? Look at you talk, Tohru."

Kobayashi:"Don't underestimate the master of the house, Tohru!"

Smaug sits up on the couch.

Then both Tohru's and Kobayashi's eyes gleam red and look at Smaug.

Later the next day.

Lucao, Fafnir, Kanna and Smaug are sitting at a table. Smaug is wearing a bandana that say food.

Kobayashi:"You guys even prepared this set?"

Fafnir:"You'll each be making three dishes: a salad, a meat course, and a dessert. Use all your skills and entertain me!"

Kobayashi:"What's your character even supposed to be anymore?"

Lucoa:"The ingredients are your choice. Stay within budget as you make your decisions. Be sure not to strain Miss Kobayashi's wallet."

Tohru and Kobayashi run to there kitchen sets.

Lucoa:"They're both driven to win."

Tohru:*Shows a plate with a full on salad.* "First dish, complete!"

Tohru:*Looks to Kobayashi.* "Did you throw the match?! Mine's a seafood and paprika Caesar salad! There's no comparing the two."

Fafnir:"Yeah, there's no need to compare them. The winner of the first round is Kobayashi."

Tohru:"Wh-What?!" *Slams her hands on the judge table.* "I can't accept that! How did my special salad lose to these cherry tomatoes?!"

Lucoa:"Here. Allow me to explain. That's because you didn't understand what a lunchbox is, Contestant Tohru. The amount you prepared is too much!"

Smaug:"Yeah and you would be full after eating all of that salad."

Tohru has some meat on a plate and Kobayashi has eggs and bacon.

Smaug:"And eggs and bacon are for breakfast!"

Fafnir:"Last is the dessert round. Something is a cup, or a fruit, would work. You're to bring one item that isn't cooked."

Lucoa:"This is unusual, isn't it? For you and Miss Kobayashi to fight."

Lucoa:"What's so bad? I'm happy to see Tohru like this."

Smaug:"She hasn't smiled this much in a while."

Lucoa:"I haven't seen you this active in a while too."

Smaug:"I'm on a vacation. So I can do what I want." *Whisper.* "Besides. I wouldn't trade these moments for anything. Not even gold or food." *He smiles and holds his hands to his chest.*

Later Smaug is sleeping on top of the table waiting for Tohru to return. Tohru comes back and Lucoa picks Smaug up by his tail and wakes him up. Then sets him down in his chair. Little later.

Kobayashi holds up an orange thing and Tohru holds up something.

Tohru:*Holds it our to Kobayashi.* "Oh, would you like some?"

Kobayashi:"Wow, a fruit? It's my first time seeing this."

Tohru:"I've won this round!" *The the fruit starts to expand.*

Kobayashi:"Hm?" *The it grows a mouth and tries to bite Kobayashi.*

Fafnir:"Items from the other world are against the rules."

Smaug:"No matter how delicious they are!"

Later. Smaug, Kanna, and Kobayashi, are at the dinner table and there are empty plates.

Kobayashi:"Whew, thanks for the meal."

Kobayashi:"Even after everything, your food's still delicious, Tohru."

Tohru:"Jeez. you flatterer. There's dessert, too."

Then Smaug's and Tohru's eye widen.

Something crashes behind Tohru. It's Elma.

Elma:"Have you forgotten the laws?! Dragons disrupt the order of this world! You're returning with me!"

Tohru:"Hmph, I see you're as damn stiff, strict, and persistent as ever." *walks in front of Elma.* "I'm not going back."

Kanna:"Lady Tohru and Lady Elma are on very bad terms."

Kobayashi:"Oh, did you learns that idiom at school? Good girl. They look like they're about to explode any second, but will things be okay?"

Elma:"Ot power's equal but this time I'll settle the score."

Smaug stands up and walks over to Elma.

Elma:"Smaug?" *She then gains an angry face and hit Smaug on the head with her trident multiple times.* "You jerk!"

Elma:*Her face turn red with anger.* "You forgot! You were supposed to help me with a task, but instead you just opened a portal and pushed me through it. You put me on the other side of the World!" *Stops hitting him.*

Smaug:"Oh yeah. I forgot about that."

Kobayashi:"I can't believe she can calmly let her stomach growl in this tense situation. Dragons are imp-"

Kobayashi:"That's quite the attitude from someone who just destroyed my home. Please follow our laws before you try protecting order in this world."

Kobayashi:"Even Tohru and Smaug. wouldn't do something like this. Probably."

Kobayashi:"She's easily influenced." *Turns to Tohru.* "Hey, she doesn't seem like a bad person, so why don't you get along?"

Tohru:"We're from different factions. Not all dragons are united in thought. There's the harmont faction that values law and order, the chaos factions that yearns for chaos and destruction, and the spectating faction that doesn't work with either group or each other."

Smaug:"Spectating faction is just a bunch of cowards."

Tohru:"So Elma belongs to the harmony faction, and I'm and Smaug with the chaos faction, so we oppose each other."

Kobayashi:"So you two are the villains?"

Tohru:*Waving her hand.* "No, that's not true. I'm a good dragon, on my best behavior in this world."

Elma:"Anyway! I'm taking you both home, Tohru! Smaug! By force, if I have to!"

Tohru:"Try it! I'll eliminate you from this world without a trace!"

Smaug:*Crosses his arms and pouts.* "I don't want to!"

Smaug goes over to a wall and opens a portal.

Smaug:"I've made another dimension, So you two will do that there."

Elma goes and walks to the portal and she walks through it.

Smaug then closes the portal.

Smaug:"She annoyed me and destroyed the living room."

Tohru:"Now, now, time to fix what she destroyed."

Kobayashi:"By the way, where'd you send her?"

Smaug:"The field Kanna and Tohru played in before."

Later the next day. The doorbell rings and Elma slams open the door.

Elma:"You did it again, Smaug!"

Smaug was on the couch helping Tohru fold clothes. Tohru is on the floor.

Elma:"I can't believe you sent me to another continent!"

Tohru:"Let's stop this. I'm happy as long as I can quietly be a maid in this world."

Smaug:"Yeah, this is a nice, peaceful word. I want to stay here."

Kobayashi comes out of her room.

Elma:"Like I'd believe you two! You're planning to take over this world, aren't you?!""

Elma:"Be Quiet! I will take you two-" *Her stomach growls.*

Elma falls to the ground.

Kobayashi:"Oh, my." *Crouches next to Elma.* "Haven't you eaten anything since yesterday?"

Elma:"I-I'm not from this world, so I can't interfere..." *Kanna goes to the dinner table and grabs a bag of cream bread. Then give the bag to Kobayashi.*

Kobayashi:*Hands out the bread.* "Oh, something like this should be all right. Here, want some? It's cream bread."

Elma:"W-Well, I'll kindly take you up on the offer to help restore my strength." *She grabs the bread and takes a bite.* "All right! I'm energized now! Time for out rematch, Tohru!"

Tohru:"If you leave, I'll give you all of these." *She points to the bag of Cream Bread.*

Elma grabs the bag and leaves.

They watch her leave.

Smaug:"I don't know who likes food more, Me or her?"

Later Smaug is sitting against a wall and Kanna is on his lap with her tail in an outlet. Their both sleeping. Then a bright flash wakes them both up. Kobayashi walks out of her room.

Kobayashi:"Put it all back! Good grief."

Kanna:"Kobayashi." *Kanna stand up and stats to nibble on Kobayashi's clothes.* "I'm hungry."

Kobayashi:"Oh, all right. Let's have breakfast."

Tohru:"Hold it right there!" *Walks out.* "I'll make breakfast, be it a full course meal or an imperial feast! Oh, shall I slaughter a cow?"

Kobayashi:"Let me have a light breakfast."

Kobayashi:"They look good. What meat's in-" *Tohru's tail is the meat and Tohru starts to sweat.* "Tohru. Show me your butt!" *She flips up her skirt.*

Tohru:"You want me to satisfy your lust, not your appetite?!"

Kobayashi: *Looking under her skirt.* "Are you an idiot?!"

Kobayashi"I can't. You're spinning your wheels though. It's like you've reverted to how you were when you first came to me." *The the doorbell rings.*

The camera switches to Smaug who has eaten most of the sandwiches. Then an explosion happens at the entryway. Smaug looks up with half a sandwich in his mouth. He looks to Kanna.

Kanna just shrugs. Smaug then goes back to eating. Then he looks to the glass window and looks outside. The the camera pans to a view of outside then turns black.