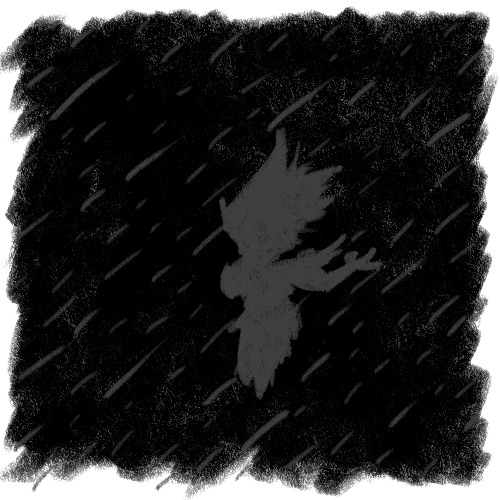 On an already dismal, pitch-black night, it began to rain over Gaddack Swamp. In minutes, a trickle became a downpour. In minutes, places where nothing had stirred and the whole world seemingly wanted nothing more than sleep, were drowned and flooded—and stomped flat.

Scaly buffalo with long horns like front-facing prongs raged through the mud and murk of the swamp. They were crocoliths, and though they were aggressive, tough creatures that mowed down any living being in their path, all they felt right now was fear. All they wanted was to escape the wrath of that great thing behind them, because while they mowed down all the life before them, the gujila would surely mow them down.

So the grunting, panicked crocoliths charged through timber and shallow riverbeds, knocking away everything in their path in a gory and rain-battered mess.

At ground level, it felt like random, earthquake chaos. From above, though, the crocolith stampede was as straight and predictable as river flow.

Agi could see them as he flew high above, making big circles like a hawk. No bird on Gaia could fly like that in rain this heavy. Like all demicrows, Agi was a master of handling his own body through shadow magic, point-phasing in and out to let rain fall through.

Phasing out of the soul thread around his ankle wasn’t an option. Not because of the thread’s constitution, but because of the magic pact Nyx had made over his long-suffering body. So, doomed to be their lookout, he couldn’t leave his circle tonight.

He could even see a distant shape rising into the sky further northwest—“the river’s source” of rampaging crocoliths. When lightning flashed, it lit up all the gujila’s jagged forms, which were too far away, and too numerous, for any onlooker to make much sense of them. As if a horde of cubist painters had gone ham.

“Four hundred!” he screamed to the ground, down the length of the thread. He was trying to tell Nyx the distance to the gujila. Again, a bit louder: “Four hundred!”

No response, and he felt hardly any movement from the thread’s other end. Didn't Nyx say they'd use a cheap little spell to enhance their hearing? Maybe the rain was just too loud...

With a bit of earlier guidance from Agi, Nyx had already maneuvered themself into the path of the oncoming stampede. Far below him, drenched and full of excitement, they now waited in dirt that had melted to ankle-deep mud.

Then a tree came snapping and splintering down. Nyx saw a crocolith for the first time in what felt like a decade, and it was far bigger than they’d remembered. To say they were “like buffalo” was to downplay their size. Twice as long. Thick with scales and muscle. Armed with hooves that worked through deep mud like nothing, with prong-horns worthy of tridents.

A crocolith burst through, and in the next instant many more followed.

As much as Nyx wanted to frontflip onto one of their backs and hold on and ride as long as they could (in a test of endurance not dissimilar to that time they wobbled on a honeydrake’s wild neck), they figured that wasn’t in their best interest. Instead, they disappeared into shadow—not onto the ground, but onto the spider’s thread around their wrist.

The thread went slack a moment before the beasts rampaged through. A taut thread would’ve torn on impact. This one was buoyed upward by the gust of wind the crocoliths brought. As the beasts ran through the swamp, their rough heads and backs brushed the end of it harmlessly.

By the time they’d even touched the thread, Nyx was well on their way up the line to Agi.

“Gah!” he cried, so surprised that he dipped. As his point-phasing became erratic, the rain started to batter his wings. He flapped hard to compensate, but within moments was losing altitude. “You didn’t tell me about this part!”

It was a rookie mistake! Nyx had forgotten to take this step into consideration. While they got their wits back after a few frantic seconds and managed to shrink somewhat—small enough that their hands could circle firmly around Agi’s neck and between his struggling wings—this had still set them back. He’d lost a lot of height.

Now Agi was able to hover. “Where to, your highness?” he sneered.

So he did. Nyx got the feeling he was taking his time with it, which did not appeal to them. Sure, it wasn’t like the two of them had to dive out of the path of destruction, but the faster this went, the more fun, right? (Nyx had never played strategy games.)

Anyway, Agi was...shifty, right? Nyx shifted slightly to the left and got an oddly-blown-up side view of his face. He still looked as brash and arrogant as before, dedicated to making himself a minor but constant pain in Nyx’s side. But if what that soul butterfly suggested was true, then he did care for Nyx...at least to the extent that Nyx’s conduct and competence reflected on himself. So he couldn’t possibly let his demon lord be an absolute wimp and loser. In that way, he was no different from their other, more obviously trusty imps.

Still, he had Nyx basically where they least wanted to be: on his back, half his size, and looking peculiarly defenseless. They just didn’t trust it. Certainly not more than they trusted themself.

In these past few minutes, their crow’s-eye view had changed slowly but significantly. In Nyx's current field of vision, the source of the stampede stood full and clear. Plus, they were higher than the gujila by now, and that fact was all Nyx truly needed in order to drop down onto it...but if the gujila was their target and tarmac, they were off-center from a clean landing.

Agi didn’t have a chance to reply because Nyx shunted them into their magical lockbox—which held things at undistorted natural size, even when its own size changed with Nyx.

Suddenly, instantaneously, the demon lord found themself high in the air amid monsoon-strength rain, without a mount and without wings.

What kind of transforming demon would they be if they didn’t make their own on the way down?