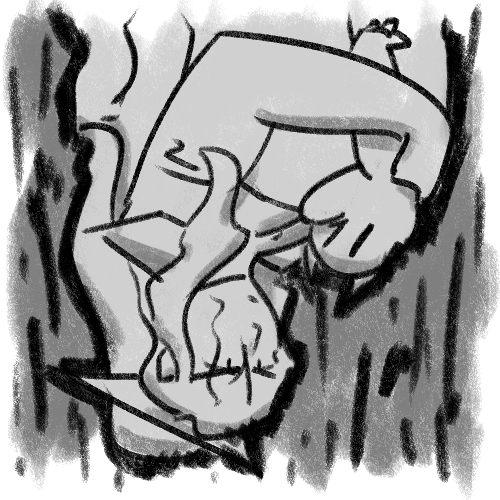 One moment, Dodd was humming along to the sound of pizza stew bubbling in the kitchen. The next, she was wrapped in Nyx’s arms as they nosedived together into rain-soaked freefall.

For demon lords, instant access to all their possessions and servants was a definite bonus. But for those servants, it was often, uh...traumatizing?

“Hey,” said Nyx, their voice a hiss two centimeters from Dodd’s face. “Stay still and get ready to burn things.”

Before Dodd could even think to say anything, Nyx’s back tore apart into gigantic bat wings. Their first beat seemed to shake the world.

With these ghastly new limbs, Nyx easily made their way toward the towering wooden colossus that was the gujila. Only they didn’t do it majestically, since they forgot that ordinary wings don’t work in pouring rain. At first the bat wings struggled to compensate by beating harder and faster, and by spreading themselves even wider (and thinner—Nyx’s size had an upper threshold). But they had to give way.

Soon the wings were spiraling behind Nyx like the train of a glorious funeral dress. The demon lord was in freefall again, and this time with a far more useless co-pilot.

Dodd squinched her eyes closed and roared, “I’ll just trust you, my lord!”

“Good, that’s all I want!” cried Nyx. Despite everything, they began to smile.

Actually, it looked like Nyx was going to make it! Maybe they wouldn’t land on the top of the gujila, but heck, how much did that matter anyway? The gujila’s body wasn’t going to be at the tippy-top—it’d be at the center, surrounded by the countless layers of wooden armor. From that perspective, they might as well attack it from anywhere.

At this speed, they could probably latch onto the side. If Nyx was reading the forms correctly, that pillar right there was an arm. Or...was it even a pillar? The wood of the gujila was so gnarled and patchwork, and carved and split at so many different angles, that it was had to differentiate. Plus, the creature itself was moving so slow—and Nyx’s universe, at the moment, was plummeting so fast.

Whoops. Nyx wasn’t gonna make it. The wind changed direction and was no longer working in their favor. Nyx and Dodd went from falling diagonally to corkscrewing straight down. Even latching onto a big wooden hunk of foot was now out of the question.

Nyx curled into a ball around Dodd. The wings, shrinking and hardening as much as they could, coiled around them both. They dropped like a meteor into the shifting sea of crocoliths—but when they got into that sea, they felt more like a kickball.

The demon lord took a few strong, bone-rattling kicks and stomps. It didn’t matter too much, though, because once they knew they’d hit the mud, they seeped into it as shadow.

Dodd, of course, joined Nyx in the shadow void, still held tight in their arms. The two fell for a few seconds, seemingly from nothing and into nothing, but Nyx soon materialized a floor for them to rest on. With a jolt, they landed upright on their knees. Their arms and wings unfurled and Dodd stepped out, backing away a little to give them conversation space. The wings retracted.

“Did I already tell you what we were gonna do?” said Nyx. “I don’t even remember. Fuck, somehow I forgot how rain worked...” They were wet all over, and that was making them cold. Not because temperature existed here, but because they expected the cold so deeply that their mind made it real. They steeled themself and tried not to shiver.

“I remember no plans, m-my lord,” said Dodd. “But I suppose you may have said them.”

“I don’t need your politeness! Not right now, anyway. Like I said, you’re gonna burn things, and you’re gonna do it fast.”

While approaching the gujila didn’t have to be done with any deliberate speed, this next step needed to be a blitz. Tear off a piece of the wooden armor and it seemed to regenerate. To be precise, another shard would slide into its place. That replacement was either coming from another spot in the gujila’s armor, or from the timber it continually integrated with that armor as it moved through the woodlands.

So if they didn’t blaze and slice through that wood fast, they would quite literally never defeat it.

Nyx picked up Dodd with the approximate grip they’d use if they were holding a cat or baby. Her limbs stuck out at odd angles. “Hey, breathe some fire.”

She coughed up a flame.

Her palms lit up with fire. She moved them from side to side.

“That works too,” said Dodd. “It hurts a little in this position, but—”

Nyx almost asked if Dodd was ready, but they stopped themself. They were Dodd’s master, weren’t they? What the hell would they ask that for?

The shadow zone’s “ground” was feeling wobbly. A sure sign that Nyx was reaching their limit, and yet another cue to hit the road. Nyx leaped.