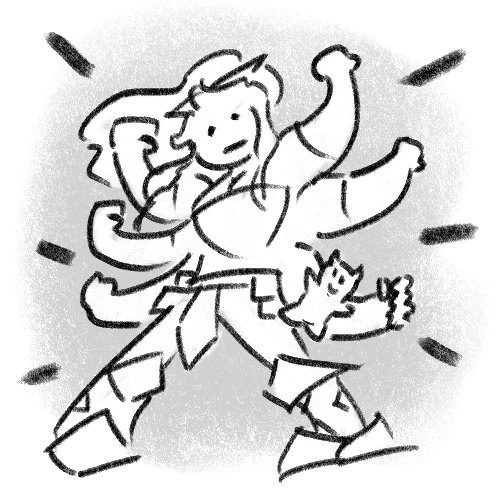 Nyx leaped triumphantly out of the shadow, but hadn't moved any closer to the gujila. That meant they leaped right into the path of all the crocoliths that had just knocked their brains around a mere minute before. Also, Nyx was baby-carrying Dodd in one arm. All told, they looked confident. Severely so.

But they were armed, too, with the Hellrazor in one arm already out and glowing with light. In the past two months, they’d become adept at not just swinging it wildly, but making a few different tactical moves. And they were better at reading the enemy, too, and responding in kind. So, while they were facing the noise of an entire stampede of monsters that weighed five to six tons apiece, their fighter’s intuition reminded them that only one or two beasts at a time were actually in their path. Therefore, only one or two targets to manage, and that change in arithmetic made all the difference.

They stopped the first oncoming crocolith with a partial duck and a jab below the throat. Thanks to the light magic charging the blow, it didn’t matter overmuch if Nyx was stabbing organs or bone, or that Nyx had been a few feet away and jabbing with little more than the tip of the blade—it was decimated all the same. That crocolith came to a crashing skid in the mud. Nyx saw the horns coming and weaved between them by turning their upper body sideways, stepping on the skull, and running along the spine.

Somewhat incredibly, even being on top of a massive-mound-shaped crocolith didn't stop them from getting run down. Another one scrabbled frantically up from the fallen beast’s side. Nyx dealt with this by stopping short and ducking as the beast hit the highest point of its stride—when the heavy front limbs shot up in the air—then making themself a shadow as the crocolith passed.

Soon they were up and out again, running, stabbing, dodging, shadow-slipping, taking as straight a path as they could manage. What once was a mountain-like gujila silhouette was now tantalizingly close.

And when that shape filled Nyx’s vision and the lines in the wood became clear, they made that long-awaited piercing dive.

At the last moment between a run and the squat before a huge leap, Nyx made a quick transformation. Half of it was an old standard, even if it wasn’t one they’d mastered: frog legs. To make the other half, first Nyx clapped their hands, Dodd and weapon and all, into a diver’s arrow. Then they melded it roughly together so that everything they carried was clamped together tight by hard flesh. Especially the Hellrazor, which was facing forward to stab into the gujila as deeply as possible.

Nyx dived. In this heavy rain, they looked like a blurry javelin arcing into a strange wooden wall.

Now they’d plunged their sword into the gujila’s hoof, a sloping wall that extended thirty meters into the swirling, storming sky.

Nyx slipped into a more comfortable, familiar form as soon as they felt the sword stick in. Then they made some nauseating changes. In two hands they held Dodd, in two others they held the Hellrazor, in one more they held their mildly curved dagger, in another they held the gun (hey, might as well), and two final hands, the ones for stabilizing and maneuvering, stayed mostly the same. Their fingers, however, extended into long spears. These hands were made of as strong a material as Nyx could maintain, but for safety’s sake, they also carried the protective serpentskin gloves...and they stretched the poor gloves to their limits.

There! Now that Nyx had a bizarre arrangement of eight arms, each with their own weapons (how was their puny human mind going to coordinate this?!), all they had to attend to was the feet. Clearly the tips of these boots weren’t going to cut it; they weren’t suited for climbing mountains, much less monster trees. The tips, once sharp, had been blunted by many an escapade. Nyx solved that problem as well as they could, without piercing holes in the boots, by turning their kneecaps into sharp and fairly hard edges much like their stabilizing fingers.

There. Now they were ready to claw their way up. And whenever they'd get to this monster’s main body, they’d be more than ready to beat on it, too.

Not only that, but they were riding high on adrenaline, cockiness, and the knowledge that this transformation wasn’t something they would’ve been able to hold just a few weeks ago. A hard life on Gaia was the ultimate workout.

They began their rough, rainy, intensely satisfying climb up the gujila’s front limb, just as it began to lift itself off the ground. An enormous sucking sound came from below as the foot left a pit of muddy earth. Then Nyx’s world turned, and their body threatened to rock out of place.

But they held firm, and somehow convinced themself not to vomit.