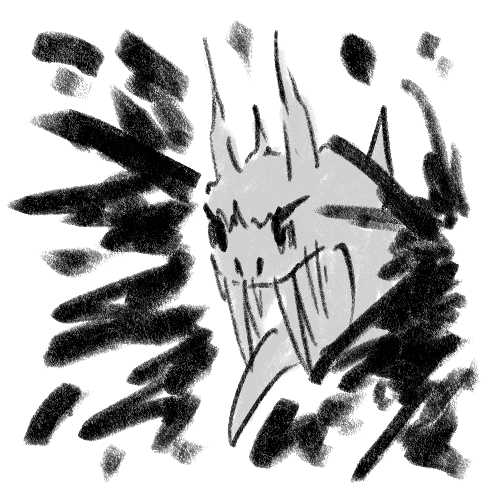 As noted, the simple way to defeat a regenerating defense is to relentlessly keep destroying it—scatter the parts or scorch them beyond chemical recognition. Once Nyx got to the main body of the gujila, this was their strategy. And while their approach was clumsy, with lots of flailing weapons, it was a good learning experience. (Early on, Nyx lifted the light gun wrong, fired, and, thanks to recoil, clocked themself in the chin with the handle.)

As not yet noted, it’s hard, hard, hard to use shadow magic to make your way through an unfamiliar solid mass with no openings. Hence why Nyx was boring this hole.

At first, it was little more than creating a tunnel by cleaving and blazing chips away from it. Like an odd wooden mineshaft. Dead scraps would scatter behind Nyx, rebound off the edges of the hole, and fall into the downpour.

Soon the hole behind Nyx sealed. A hole in the gujila’s armor was like a wound in a body, only it could heal hyperfast, at will. Within the first minute, all light from the outside world disappeared.

A lesser being than Nyx would’ve been claustrophobic. These conditions certainly made Dodd, whose blazing arms flailed wildly to eat through wood, even more uneasy. But Nyx had expected this darkness, and they coped with it blithely.

Because as clumsy as this whole strategy was, Nyx felt like a machine. Their eight arms were actually beginning to move naturally now...well, they would never not be an erratic mess, but at least they were coordinatedly sloppy. Nyx didn’t have standing room, so with two stabilizing arms and legs they crawled along a splintery, ever-shifting surface. The pit they made with their rambling instruments always started large, but was constantly sealing and shrinking. On top of that, the only light in this tight space, period, came from the flickers of the light gun and Dodd’s own fires. Even that was dimmed thanks to all the suffocating smoke.

Nyx couldn’t stop moving in a space like that. If they did, it would all close up on them. Probably kill them on impact. Simple as that.

But then, as Nyx pulled back their Hellrazor, something caught on the toothed edge...

It was hair. And not animal hair—they'd come across more than a little of that. This was a lock of hair. Attached to its scalp.

Was u’Freya still...alive, in here? They weren’t supposed to be alive, the prey. They weren’t even supposed to be hanging barely onto life. Once the fabric of your being fused with wood, became entwined in it, your blood, your organs, all your living systems were supposed to morph, harden, drain...

Nyx had just freed half of u’Freya’s head. Most of her hair was matted, glued to her skinned face. Her blinking eye quivered in disbelief.

She was speaking in a strained, hoarse whisper, but no real words came out.

The cruelest thing to do, in this situation, would be to leave her alone to die slowly.

Yet killing her now would be a different kind of cruel—one that would punch Nyx in the gut. Already they were surprised by how deeply seeing u’Freya as a hopeless living corpse unnerved them.

There was little time left to think it over. If they didn’t get a move on, this chamber would seal. No use whinging over it any longer.

They yanked u’Freya’s head up by the hair—she gasped—and a light gun flashed point-blank into her throat.

Then Nyx stepped over her throat and moved on, mulling over all the different meanings of weakness—not for elves, but for demon lords.

Without its magic, the gujila would not have been a wildly intimidating monster.

Outside of the wood, it stood ten feet high and walked on both feet and knuckles. Short hair grew on most of its body, but its chest, face, palms, and soles revealed thick lizard’s scales. Along its back and arms, spines like razors jutted out in intimidating lines. Its dark red eyes were those of an insect. It smelled with its tongue, but it whooped like a baboon.

Clearly a dangerous beast even without magic, but not a village destroyer.

After forty-five minutes of relentless carving, Nyx finally reached the core of the beast. Even though they knew full well what a gujila was, they were still surprised by how simple the killing blow turned out. They made it without even registering it! And all they’d done to get to this core was follow the source of the magic, which any demon worth their salt can do with a moment’s concentration.

Stab. The dagger hit its mark. The gujila howled, bleeding from the eye.

Though it tried to marshal the troops, so to speak—turning the chamber around them into spikes that closed in—Nyx immediately flung Dodd toward the gujila’s pierced face and the exposed parts of its neck and chest. The pain coursing through its skull was more than enough to scatter its brains, making the spike attack disintegrate.

Making everything disintegrate. The wood around them began to melt.

It was an amazing sight, an amazing feeling, to be surrounded by a mass of melted, rapidly falling wood. Suddenly one of those solids that nature guaranteed would never be liquid, was liquid.

Suddenly Nyx was falling through a dream, all their haphazard limbs and weapons falling untold feet back to earth.

Gaddack Swamp was about to be drenched in a very strange muck that would spell doom for earthbound animals but would also make a highly effective fertilizer. The crocoliths, scattering, would never know what happened to the fury that scared them. The rain, which wasn’t pouring as hard as before, would stop as it always did.

As Nyx fell they could see, just barely, a silver spark in the sky. A soul-sucking butterfly pulled from the lockbox at the last moment, doing its work with the gujila’s spiritual remains even as the gujila's mangled body fell. Soon that power would be Nyx’s...

They shut their eyes and smiled, going into a blissful sleep if only for this moment.