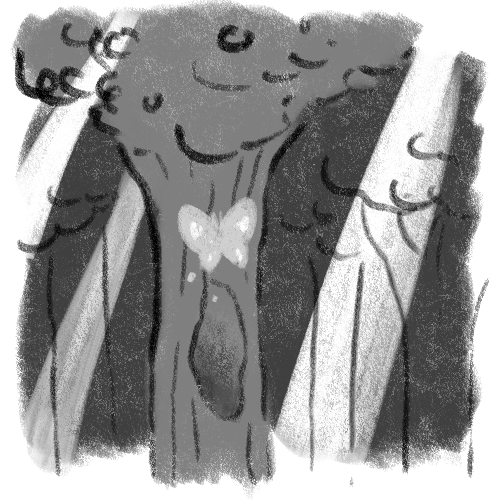 Nyx considered it pretty fun to curl up in the hollow of a tree. It was cozy, it echoed with ominous sounds in the night, and the damp, stale air circulating inside of it wouldn’t make a recently turned demon like Nyx sick (or would it).

Morning came to the muggy old hollow of this old oak tree. Idyllic yellow sunlight streamed in through an oval hole. Nyx hadn’t bothered to change their size when getting in—to them, that kind of defeated the purpose, the wanderlust, of it.

They moved their knotted arms above their head, then stretched out all the kinks. They yawned mightily. Raising their neck a bit to see the full glory of the sun’s rays, feeling a current of lemon-zing energy run up their spine, they...fought temptation, shifted as much as they could, and slept.

One hour and thirty-two minutes later, they returned to life. White sunlight came in now, just as beautiful as the morning light. Nyx squirmed afresh. Craning their neck to see the light, filled with zest, they...got as far as placing their hands on the opening of the tree. They pulled on their body for a second, but gave up. They made peace with this decision: after a hard-fought victory, they deserved more time to recover, didn’t they?

So they slept for a half-hour more.

On the bark of the hollowed-out tree, just above the opening, Puckett the soulsucker butterfly rested and occasionally gave his wings a sluggish flap. He was an easy-natured fellow, used to an ambling life in the Shadowdepths following, but never leading, his fellow demons. And he had been keeping watch all night and morning, sending down scales now and then for a sort of protective screen.

Now, finally, his master hoisted themself upright in the hollow. What startled him about this was the loud series of cracking and popping sounds that ensued. Did he miss something, was someone firing explosives???

“Ugh. Demon backs aren’t supposed to hurt, are they?” said Nyx. They arched their neck far backward against their hand, making another loud and terrifying pop.

Puckett genuinely had no idea, because butterfly backs don't work that way. He was just glad he hadn’t missed an intruder. “I don’t know much about...anything,” he said.

“Well, someone somewhere long ago once theorized that a human-turned-demon will take a century to really develop. I guess that means I’ll feel better when I’m a senior citizen.”

Puckett didn’t know what that meant, but sometimes you have to just nod and let people talk.

Nyx climbed out of the hollow, then engaged in several groaning, slow-motion stretches and complained several times about being hungry. All the same, even a soul-devouring butterfly with a poorly developed moral compass could sense the current of happiness beneath it all.

Yes, Nyx did stretch and bone-pop like a human octogenarian. But they had also been supercharged last night by a transfusion of mortal souls.

They hadn’t just been resting their body after a hard and tedious day’s work. They’d also been adapting to the influx of power that Puckett had injected into their bloodstream. Maybe that was part of why they moved so slowly and arduously this morning: because their own soul wasn’t just changing, it was recovering. A muscle has to tear before it gets stronger.

After a vigorous series of trunk twists, Nyx was now panting. Slowly, yes, but still panting. They swiped a hand across their forehead, then set it to their chest...and realized something was wrong.

They ran the hand around their neck. Under their neckline. Checked their arms and legs and the inside heels of their boots. Nothing.

The butterfly hurried to Nyx’s side, hovering beside them, looking around frantically for...well, actually, they didn’t know what Nyx was looking for.

“The lockbox,” said the demon lord. Now their voice was low, grave, and a little sulky. “All my stuff’s in there.”

“You were supposed to keep watch,” said Nyx.

“I swear I did. I didn’t see, hear, or otherwise sense anything suspicious. Even the rodents kept away...”

“Yeah, yeah,” said Nyx, dismissing it all with a piddly wave of the hand. “It’s my fault. I didn’t set any hexes on it.”