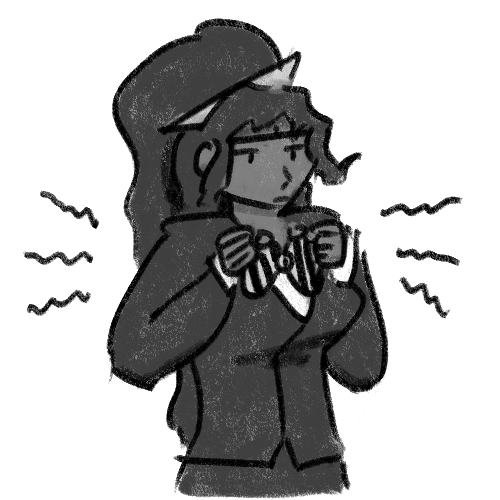 Hours before the show, Ethel and Nyx had chatted in the Great Bulbous shed. As Nyx reclined on the stack of mysterious car-like parts, Ethel tried on outfits from a closet with a surprisingly high amount of them.

“The bowtie is a bit much.”

“We’re in Gaia, they won’t know what that is anyway.”

“But I’ll know, and I’ll berate you for the choice.”

An orange-and-black striped bowtie bounced onto the floor. “Okay, what about now?”

Khaki pants, a yellow shirt, and a tweed blazer reminiscent of antique college professors and complete with elbow patches. It made Ethel feel smarter just by wearing it, and Nyx just by observing it.

“Great!” said Ethel as she straightened the sleeves and shoulders. “Help me out here. It’s still lopsided, right?”

The conversation shifted from the professor to her companion. “I’d like to dispel any illusions I might have of you being classically evil,” Ethel said, “so it’s my preference that you wear something that on Earth brings to mind purity, like, for example, a totally white dress.”

“And what if I’m un-classically evil?” said Nyx.

Ethel shrugged. “I’ve been prepared for that.”

Several towering figures still waited under enticing tarps at the back of Paladin’s Park. Now, at last, the people’s attention was turned toward the woman standing before those tarps.

She kept scanning the crowd (fearful that Nyx might not get back in time) and clearing her throat (fearful of wiping her voice out, because there was no microphone or anything).

Strictly speaking, there was nothing to be afraid of. Sheriff Longspell and Deputy Clarion flanked her, hands firmly set on the weapons at their belts. None of the lightbulbs had exploded or even gone on the blink.

It was time for her to speak—the speech was for eight o’clock on the dot—but she kept procrastinating.

Clarion, too, was procrastinating. As Ethel cleared her throat for the twenty-eighth time, Longspell peered over at Clarion and noticed him sweating bullets.

Then Clarion leaped between Ethel and the crowd, panting like a dog, with one hand over his heart. “That’s it, I can’t stand it any longer!” he crowed. “Ethel!”

She was still scanning the crowd. “Huh?”

“Listen, I’ve known ever since you walked into the sheriff office door that you ain’t no ordinary dame! That’s why I pledged to protect ya! Now I see the light...I know the only way to protect you forever is to seal it with a kiss! I love ya, Ethel! Marry me!”

“...Uh...this is the wrong time,” said Ethel. She turned to Longspell, to get his reassurance that this was indeed the wrong time. It was. He looked downright disturbed.

Clarion turned outward, toward the crowd. “Hey, everyone! She’s gonna marry me, tonight, under these beautiful fine lights!”

Ethel groaned and pinched her brow. “I had a whole introduction ready...”

Meanwhile, across the park, Nyx continued escaping detection via the shady trees along the edges of the park, ducking in and out of shadow for added protection.

They didn’t have to do this. They didn’t have to do any of this, did they? Why were they acting like some scared little rat? They were a demon lord, for cripe’s sake. Just because they split Charlie Grits’s eye apart didn’t mean they were a convict—they were literally above society’s rules. In fact, if not for their dedication to letting Ethel have one nice night, with no strange interruptions from gremlins or elsewhere, they could’ve taken over this whole town by now!

Well, Mistake #1 (after Mistake #0, which was staying in Hanalagula to begin with) might have been feeling as if they could make a positive difference on this night. They should’ve cleared out, let Ethel deal with any fallout and believe whatever she wanted to believe about Nyx’s morals.

Nyx paused and got their bearings, standing under a dark willow. They summoned up one of their classic strategies for calming down and strategizing: taking ten deep, silent breaths. Therapists: just one of the many Earth things they missed.

Now they were nearly on the bayou’s edge. The willow tree overlooked a piece of filmy water. A few canoes waited at the dock here, though they seemed to have gone unused for ages—the scenery wasn’t any prettier than what you could find in the entire rest of the town. The water was quite low, and actually passed under the stone wall that surrounded the town. Must’ve been some kind of filter or grate separating the water here from the water there...

...Or maybe do get distracted? What was that over there?

They could see a pod of fireflies at the corner of their vision.

Just kidding, it turned out it wasn’t fireflies. Nyx turned to see them straight-on and could swear they had the wispy, spectral traces of electric magic, though to Nyx these were just barely visible. That was the glow of a bunch of gremlins!

And they weren’t just hanging out idly. The longer Nyx stared, the more they could tell that the gremlins had their own network going. Lines like glowing threads stretched between them. A kind of chittering noise, something in between beeps and the flaps of insect wings, was blipping along them.

Welp, Nyx didn’t 100% know what this meant. It did mean that Wilco was lying about being the only gremlin around here. It did suggest that Hanalagula was in some deep danger. But all that mattered to Nyx right now was, they’d made a stupid vow and they were bound to keep it.

They grabbed their Hellrazor and saluted the gremlins. They mouthed, “Heyo!”