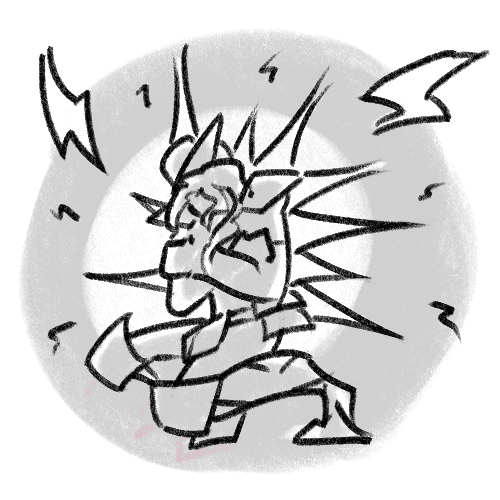 A swamp serpent made entirely of metal, glass, wires, and screaming-bright light rose its head proudly above Paladin’s Park.

Surrounding it, standing just a few feet shorter, were models of monsters and animals and people, all revered, all stunning. They radiated with a steady glow, standing as calmly as boulders and lighthouses.

At the foot of these light-shrouded giants, Clarion looked up with his hand over his brow, stumbling as if drunk, as if the bulbs were dramatically blinding him in the climax of his own story.

Meanwhile, Ethel was making some announcements to the crowd about the technical specs of all the lightbulb statues. She didn’t seem to notice, or care, that the crowd was pretty well dispersed and preferred to stroll around the statues, taking well-laid stone paths under now-sparkling arbors.

A familiar figure came running and panting into view. Ethel squinted at the horizon, struggling to see between all the flowers and food carts. Yet they knew it was Nyx, thanks to the long white dress. Otherwise, though, they looked just like themself. Clarion saw them coming, too, and howled with anguish.

“Hey,” said Nyx once they’d caught up to Ethel. “Everything okay?”

“The exhibition looks just the way I expected it would look,” said Ethel, not unhappily.

Nyx guessed that meant everything was good, but they had to make sure. “No distortions, no explosions?”

As if on cue, a big lightbulb on the beak of a gryphon, hanging almost overhead, erupted. A gremlin dropped out and, in a comet-streak of lightning, landed in Nyx’s hair. Ethel almost fell backward. A nearby couple screeched and ran.

On instinct, Nyx swatted the gremlin. This did nothing. The gremlin had become an electric body, so their hand phased through—and scorched with the lightning. “OW that’s hot,” they groaned.

A whole troop of gremlins followed—a series of glass pops, a sudden hot charge in the air, and then they’d latched on to Nyx’s body, blazing all over.

In this sliver of a moment, Nyx took in the scene: about fifteen sizzly gremlins swarming on their head and shoulders and back and shins, a rain of glass that still hadn’t finished falling, and Ethel cowering nearby...

Did Nyx even have enough time to get Ethel out of there safely? They didn’t even try.

Instead, they brought Ethel closer. And transformed, imagining a porcupine.

Their body, especially the back, distorted and curved like a solid umbrella above Ethel. A shock of spikes, close-packed and dense, jutted out. It pierced the gremlins clean through.

Nyx could still feel them tingling, though. Sure, it wasn’t painful, but it could become a nuisance. And if they found come way to creep around and inside and get Ethel...

Nyx, still hunched around Ethel, changed their flesh into something like rubber. But the gremlins were still hanging on. Of course they were. Nyx was now a little more impervious, but rubber wasn’t gonna actively repel an immobile electric being. And they could hear and feel the gremlins slowly, tenaciously digging their claws in along and between the spines.

“Are we—staying?” said Ethel, for lack of a better phrase.

The demon lord’s back flashed all over with a burst of light, and the gremlins shrieked. (So did lots of park-goers.) Half the demons fell as if they’d been peeled off by the blazing force, and hopefully their wounds were great enough that they were either dying or out of commission. The other half were still clinging, but dangling, and wincing from the pain.

Nyx knew that move had no real power behind it—not like a sword slash would—but it was a good shot for such a quick action. Now they’d try another one.

They held Ethel tightly around the chest and shoulders, gritted their teeth, and tried to remember what a suplex looked like.

Then they fell back, driving all the gremlins on their back straight into the ground. It was like Bowser’s move in the Super Smash Bros. games, only nobody present knew what that was, not even Nyx, except for Ethel.

Now Nyx found themself contorted into such an unrecognizable, abstract-shapeshifting-mess, with stretched and overmuscled legs and layer upon layer of reinforced spikeshell-back, that even they themself didn’t wanna see it...with what felt and sounded like fiery howler monkeys shrieking just below, impaled on so many individual rubbery spikes. And Ethel was in the picture too, strapped in as if for a roller coaster.

And Nyx could see, upside-down, the feet of so many gawking people!

“I don’t know what the fuck this is and neither do any of them,” Nyx muttered to Ethel. “Let’s get out of here.”

Nyx sent them both into shadow and retreated, as fast and instinctively as they could, into the familiar cover of bushes and trees. Along the way, they heard more lightbulbs pop. Ugh...even more gremlins. And while some adventurer in those crowds might’ve been a sight stronger than the lady Nyx had elbowed an hour or two ago, it was beyond doubtful whether Clarion or Sheriff Longspell would, or could, do a thing about it.

Nyx was back in the familiar game of keeping shadow-stealth moving on the outside, popping in and out strategically to make sure they didn’t get exhausted, while maintaining that shadow void on the inside. Ethel was in there, floating in a void. Maybe they’d make it more comfortable for her, once they felt sure that the chase would pause or let up.

Ethel would be alright. She’d be a little shaken at first, but hey, she’d been through so much change and tumult in her life already. After half a minute of shadow travel, Nyx asked her if she was okay, but mainly as a courtesy.

Then they got a good look at her. She was silently weeping.