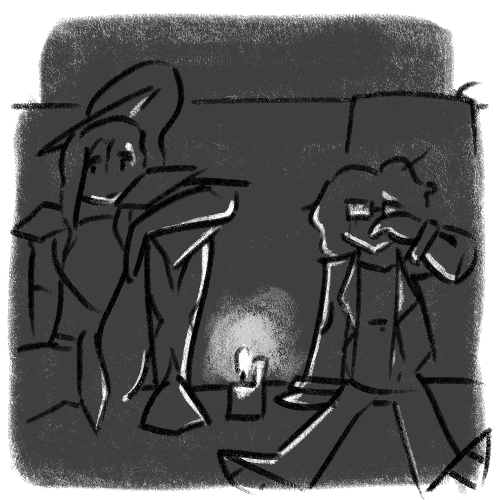 “I guess your entire livelihood is crumbling all around you,” said Nyx. “Sorry.”

“That sounds like sarcasm,” said Ethel. “Sometimes I can’t tell with you.”

They were sitting against the side of an unknown bed. Another cozy, cabin-like stilt house in Hanalagula. The doors were locked, just as they had been when Nyx’s shadow slipped underneath. A lighter on the table had allowed Nyx to light a candle. To keep it away from the window, they’d set it on the floor. Now it lit the lowest edges of both their faces.

Ethel was still sniffling and wiping away tears. “I still have the important things,” she said. But clearly she was struggling against her own feelings. If she’d really meant it, Nyx knew, it would’ve come out with no resistance. So they couldn’t believe her.

Nyx looked away. It was hard to look dead-on. “Well...what now?”

Ethel had raised her voice. Another sure sign, another rare thing.

Nyx sighed. They brought their knees up to their chin and stared into the floor. “I told you I’m a demon lord now,” they said. “I came here looking for something, but I had no plan for how to get it back. So I’m gonna have to find a way back to the underworld and get the next best thing. That’s where I’m coming from and where I’m going.”

It occurred to Nyx that Puckett the soul-sucking butterfly was still wandering around elsewhere. Hopefully around the park. He himself would be a minor loss, all things considered. But the loss of strength over time. Nyx definitely wasn’t in the mood to analyze that possibility.

Ethel wiped her face on her sleeve one final time. “So what,” she said, perhaps to herself. “So the exhibit had a few malfunctions—so what. It’s just a few specks out of the larger project of my life.”

“...Yeah. It is,” said Nyx, wanting more to agree than to understand. “That’s the spirit.”

“I-I—I can go back, I just don’t want to...your coming here made me realize that. I don’t want to live a humble life on Gaia. I can’t stand doing that. Even when I was here, I didn’t let myself settle—I tried to build myself up. But...”

“The sheriff told me he didn’t think you could handle it.”

Nyx felt wary about this line of thought. Sure, Ethel had wanted to be something extraordinary at the start. She’d considered the change from Earth slacker to Gaian hero to be not only ideal, but inevitable. After gaining astounding psychic magic, she’d challenged herself to develop it further and further still.

Nyx had admired her determination more than anything else. That’s why seeing her skills plateau hurt so badly to watch.

If they’d gone their separate ways on a clear day, from a dungeon they’d cleared a couple floors of, and if they’d waved goodbye and retired from the adventuring business with the sad smiles of balding businessmen...in other words, if they’d left adventuring in a gentle way, it might not have all felt quite so gloomy.

But things had been ripped away at the dungeon of Farander. Ethel didn’t feel like she’d given up after a tough fight after that. She didn’t just feel like a loser. She knew that she’d let people down, Nyx more than even herself.

“I’m sorry I came here at all,” said Nyx. “I kept telling myself not to do it! I just stirred the pot. I mean, I don’t have an inkling of what your innermost feelings have been all this time. At least...I-I didn’t, until just tonight.”

“You know,” said Ethel, “I’m not upset at you, for doing any of this. Everything was going to fall apart sooner or later.”

“No, it would have. And I need to accept that. I think that it was brave of you to think about what you’ve left behind without simply eradicating it. Because that’s what you could’ve done to me...you’re a demon, after all.”

Nyx’s human heart said “no,” on impulse. But they stayed mum about it. That was a whole ‘nother can of worms, and they weren’t going to slather their own problems on top of Ethel’s.

“...I hear something outside,” Ethel whispered.

A key went in the lock. The front door across the room was opening. It didn’t just swing open—Clarion strongarmed it.

He came running into the middle of the room, even before he’d seen what was going on.

When he looked up, his face fell.