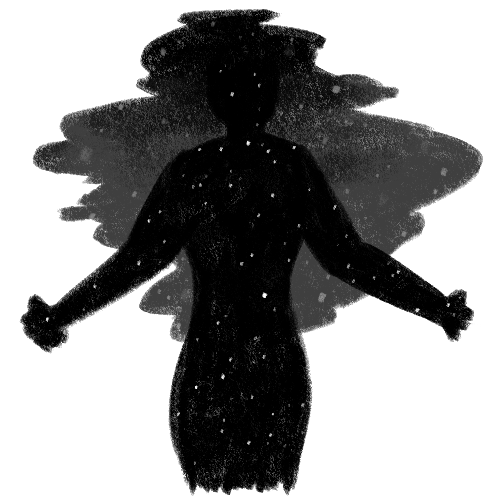 But he’d been so sure there was a presence in here...

The room was dark. Clarion moved slowly, haltingly, from the front door to his bed. He looked around. Grabbed the handkerchief off the counter and the lighter that must’ve fallen—they held memories from the times he, Ethel, and Charlie Grits (that dog) had served the sheriff together. He pocketed them.

He noticed, a little late, that a candle was sitting on the floor beside his dresser, and that it was sending up smoke.

“Damn Grits,” he muttered. “You get outta here, you...” But he stopped himself and scratched the back of his neck. “Wait...Ethel?”

Nyx was watching from the shadows, keeping Ethel in their shadow void. They were hiding together under the dresser, sussing the situation out. Technically, Nyx could have just scooted out of there and left town that moment. But...

This presented a chance to tie up the loose ends of something from Ethel’s life, and Nyx wasn’t willing to just olly out of something of that magnitude. Too human.

The demon lord unveiled themself. A sunburst filled the room, a starry galactic explosion, and it so blinded and terrified Clarion that he howled and raised his short sword before his eyes. Tentacles like the arms of the Milky Way spread, whirling wings, from the body and head of luminous, silhouette-dark Nyx. They settled, becoming hair that shifted as if underwater. So did the light, which dimmed to a mere body-glow suit human comfort.

Ethel stood beside them, paralyzed twofold: dazzled by the spectacle standing right beside them, and confused because they hadn’t talked this plan over.

“Don’t you mortals have some unfinished business with each other?” they said in their most seductive voice possible.

Clarion, shaking terribly, lowered his dagger. His face was hollow. “How could you just hang me up to dry, Ethel? You knew I loved you!”

“No I didn’t,” said Ethel. “But I get that it was a mutual misunderstanding. If we’d been from the same world, maybe it would’ve been different.” She looked away, just slightly. Her mouth twitched. “Sorry.”

Clarion gave the foot of his bed a short, swift kick.

“Then just get outta this town, Ethel. Get out. I don’t wanna see you again. Ever.”

Ethel opened her mouth to speak, but hadn’t decided on the words.

Nyx took a look at her, read her expression, tried to gather her intentions. Ethel’s heart wasn’t in this. Clarion hadn’t even been at the level of “just a friend,” he was just an acquaintance on this other world that Ethel would never quite get the hang of.

Nyx put a hand on her shoulder, a signal meaning “shut up for a moment so I can take care of this.” Ethel understood, and closed her mouth.

“She doesn’t want to stay in Hanalagula anyway,” said the demon lord. “You might as well spread the news.” They cackled nigh-authentically—sometimes they could act. “No, she’s going to the twelve hells with me.”

Clarion’s eyes brimmed with tears. Stories of mortals lost to demon trysts were circulating in his mind. You could see them in his eyes. “Y-you can’t throw your life away like that, can you, Ethel?”

Nyx lowered their head. “Aren’t you the very one who said you didn’t want to see her again?”

He didn’t answer. Maybe he felt like the demon’s words had revealed his own as a big mistake.

Nyx leaned into Ethel’s ear and whispered, “Am I doing alright?”

“Yeah. This is fine,” Ethel mumbled, not looking their way. “I never cared for him, really.”

They removed their arm from Ethel’s shoulder, turned to Clarion again, and strode forward. They held their arms out, as if offering what they’d given Ethel to a new victim. Clarion, shivering, unwilling, looked backward, only to see nothing but void. The door was either hidden or gone.

Nyx enveloped him in their arms. Their lights glowed brighter, curled around him like the tendrils of unholy cthons...came closer...

Another sun-bright, lightning-bolt flash crossed the room, passing through his face. Nyx phased their head into shadow to let the spray of blood pass through. They’d just made a scar that would never quite heal.

“Spread this, too: Demon Lord Nyx was here.”

They released their grip entirely, and Clarion’s body hit the floor. He was alive, just fainted. Nyx’s lights flickered out, and the room went dark and cold.

That, of course, was as good a cue as any to leave.

“Hey, Nyx,” said Ethel in the pervasive darkness, “did you just leave a Joker scar?”

“Uh...you mean the, the thing across the face?”

“Yeah. You know the Joker?”

“Of course I fucking do. I just didn’t catch the resemblance because I don’t think about these kinds of things twenty-four-seven.”

0
Support I’m the Demon Lord, but All I Wanna Do is Sit Around and Eat Pizza Poppers