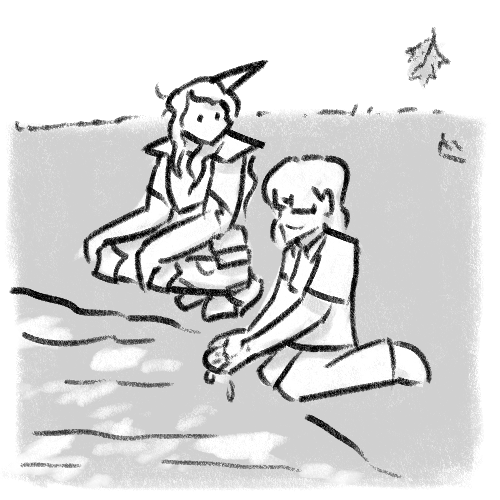 The morning was fresh. The air in this clearing didn’t feel stifled or still. A cool breeze troubled the birches and, now and then, rustled a few browning leaves loose.

A covered wagon had stopped beside a spring. The waters, as clear as either traveler had seen in the wild for quite some time, bubbled over slate and into a mushroom-bordered pond. A horse waited with the wagon, bending its neck to gnaw the grass. The travelers kneeled beside the pond, drinking with cupped hands.

Being magical prodigies was a double-edged sword. Normal people could at least use magic to manufacture a cup’s worth of potable water per day of travel, but these two were doomed without ready water sources and frequent canteen reloading.

But that wasn’t as high a hurdle as their Earthly heritage. That part didn’t make life harder—it just made things harder to bear.

The way Ethel had explained it to Nyx long ago was, she was less fascinated by what she’d gained than what she’d left behind. So she would always be looking backward.

And the longer Nyx spent as a demon, the more they wondered if that was true for themself, too...if that could be universal, among the Twelve, among however many or few had survived until now.

As they drank at the brook, Ethel spoke up out of nowhere. “It’s all fine. I’m getting over it now. A calamitous departure is better than a delicate one, in this case. I just...couldn’t bring myself to care for the people in this town. Not as much as the people I’d known and left before.”

For several long seconds, Nyx thought about those words. And about the fact that they’d told Clarion that Ethel was going to become a demon—which was a lie, of course...

“How does it feel, physically, being a demon?”

Nyx indulged. “You’d be surprised by how much is the same. There’s the obvious bonuses and a new sense or two, but I still get familiar aches and pains. It’s more like being superhuman than it is like being another species. But what do I know. Compared to natural demons, I’ve lived as long as a mayfly.”

“I should have been more specific,” said Ethel. “What’s it like existing in the underworld?”

That was another thing entirely.

Surely Ethel had already heard about how humans couldn’t even exist in the underworld for long. Their bodies and minds couldn’t handle it. Actually, neither could Nyx’s.

“Well, that’s where I stick out like a sore thumb,” they said. “Being in the underworld gives me the worst headaches imaginable. It messes with everything my human senses have taught me. Movement itself is different—and I know you’re gonna say that’s fascinating, but it’s hard to focus on the miracles of life and the universe when you can’t even walk down the street right.

“You kinda move by force of thought. It looks like you’re moving others, but you’re actually moving the likelihood of you meeting others, based on a mixture of logic and emotion... It doesn’t make a lot of sense.”

“Actually,” said Ethel, “it sounds quasi-quantum. And, hey, if it works, it works.”

They watched the wellspring in silence, heard the whistles of birds.

“I can’t deny it, Nyx. I’m still curious about being a demon.”

“Please don’t turn me, Nyx. If you’re not adapted to it and you’ve been a demon for upwards of two years, then certainly I’m not ready either.”

Wha—what did she mean, “not ready for it!?” Nyx almost felt offended. It was a fair point, though...

They looked at each other, and their reflections, shimmering in the spring, shone in the corners of their eyes.

The suggestion was a little tempting. They’d basically done it before, when they were adventurers with Arkadia’s guild, and they could do it again. And in one sense, the option was better than ever: without ties to a guild or town or organization or even to those other Twelve, they’d have a truer sense of freedom. Heck, with Nyx’s powers, there was the potential for freedom in two realms.

But the adventurer’s life, the best way to live as a happy and healthy and law-abiding citizen in Gaia, was permanently barred from Nyx. And that had been their mutual dream.

And they couldn’t process it all just now. At least, they chose not to.

“Okay, Ethel,” said Nyx, and they laid their hand on hers.

Nyx blinked. “Oh. Uhh, I dunno, I haven’t really felt it out yet. I mean, I’m not against the possibility, but...I dunno, isn’t it weird to have a demon-human relationship? Ugh. No, I wasn’t thinking of that.”

“I’m not ready for commitment,” said Ethel. “Marriage is a bit much. But we wouldn’t have to bicker over every little thing if we just laid out all our chores and things like a contract...”

Nyx wasn’t sure why she’d jumped to thinking about marriage, let alone in a traditional-Earth sense, but they hoped that regardless, that jumping-ahead was a skill that would serve their team well, even if they never got back to Nightfall Castle.

0
Support I’m the Demon Lord, but All I Wanna Do is Sit Around and Eat Pizza Poppers