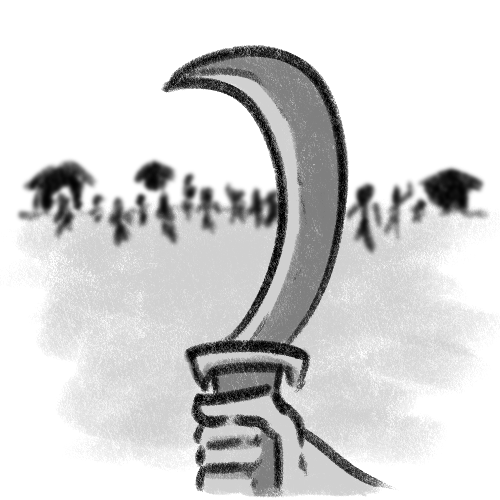 The demon lord and friendly human tagalong fell through a warp in space and tumbled onto dandelions and poppies. From their perspective, they’d just fallen about two feet, having jumped from a dirt path. But to the villagers, they’d come out of the sky.

And those same villagers might have been a ways away—the demon and pal had landed on the outskirts, on piles of leaves dropped by the bordering woods—but the newcomers hadn’t escaped their notice. They were coming.

Ethel scrambled to her feet, slid off her glasses to wipe her eyes. Nyx, staying calm, rose and dusted themself off.

“One last time,” Nyx whispered. “Did you see anything?”

“No. What happened? My mind is a blank.”

“Yes...” Her voice was a bit sulky—she hated the sensation of losing her memory just that much.

The two of them looked up to see...an angry mob.

With the size, strength, and devotion of football fans, that little flock of villagers, smelling freshly of beer, was headed for them with fists and mugs in the air.

“Greeeat,” Nyx moaned, mashing a fist in their palm. “We don’t even get a chance to sneak around.”

“Maybe they’ll be friendly once they get to know us,” decided Ethel.

“Let’s beat them up,” said Nyx, grabbing a blade.

Ethel blinked for a moment. The angry mob was only about twenty meters away now. Finally, she cupped her hands around her mouth and yelled, “WE MEAN NO HARM. WE ARE JUST ADVENTURERS. WE ACCIDENTALLY FELL INTO THIS WEIRD MAGIC HOLE IN THE GROUND, AND IT LED US HERE.”

Those words...actually had some effect. They didn’t calm the crowd, exactly, but they confused them. Some began to hold others back. Their speed fell to a halting, walking pace.

“Hold on,” said a man at the front. He must’ve fancied himself the group leader, spreading his arms out wide to try and stop the march. “Just believe ‘em! What’s the worst that could happen?”

The familiar hopelessness of conquered commoners was back again, Nyx realized...and then they noticed, at the upper limit of their vision, a hazy blue shape on the horizon. Castle of a demon.

The mob had stopped, but there was still indignance in their eyes. Nyx sensed they hadn’t been a demon lord’s subjects for long. They lashed out for freedom, of course, but more than anything right now, they just wanted answers.

The mob collectively turned to Ethel, to see if she was any smarter.

“My name is Ethel Grisham. You might have heard of me, since I’m a famous inventor who for several months was based in Hanalagula a few miles over. I can handle glass, metal, light weaponry...”

Ignoring that. The “leader” stepped up and shook Nyx’s hand. His smile was hearty. Either he didn’t suspect just how shady of a character Nyx was, or he didn’t care. “Nice to meet you...I suppose. You say you didn’t come here on purpose?”

“I...didn’t doubt ya. How’s about a clandestine uprising, here?”

“Woah, really?” Nyx said without thinking. This felt like a bit much...being asked to liberate a village on your first day in. On the one hand, bumping into a demon lord was serendipitous. If Nyx played their cards right, they could use this lord’s powers, or some underling’s, to get right back to the underworld and track down their dear beloved castle. On the other hand...liberating a whole village, yeesh. That was not only a big responsibility, but also not strictly necessary.

Unless you subscribed fully to a human moral code. Ethel was nodding vigorously at the ‘clandestine uprising’ idea.

“—I mean,” Nyx course-corrected, “I assume you’re being dominated by some sort of monster or demon, here.”

“A demon lord,” said one of the rabble.

“That’s what I figured,” said Nyx, gesturing toward the clearly-castly shapes in the distance. “But surely any demon lord worth their salt would have some magical way to sense human activity? Or humans coming in?” (AKA precisely the things Nyx never had, but that a demon with greater experience and resources surely kept in their arsenal?)

“Look,” said the leader guy, “we’ll tell ya all we know. Just come to the greathouse and we’ll, y’know, discuss it over beer and pie.”

Nyx lowered their brow. They got the odd feeling that they were about to become the hero of around two hundred random villagers, which would have excited them about three years ago but now just felt bewildering and sad. “We’ll see about ‘wonderful,’” they said.