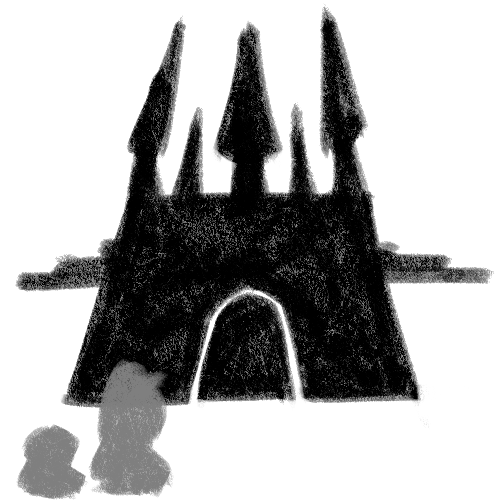 When Nyx and Ethel got close enough to the castle, hiding in bushes, gorgeous strings of cyan and violet inlaid in the azure walls popped out. So did the crests of seashells on the archways and flying buttresses, their hints of coral and fingernail-pink.

So thick was the castle with hexes and protections that Nyx could actually see them, faintly, on the air. Not individually, but altogether, like any mist.

“Can you see that mist?”

“I’m just fucking with you this time, I know humans can’t see it. Hey, how about now?” They lifted off Ethel’s liability-glasses. Ethel didn’t protest, but merely whimpered.

Nyx fiddled around with them as they spoke. “It’s becoming increasingly unlikely that Lordess Melachrie can sense us,” they hummed. Thirty meters away from the castle and still no guards or magic tendrils? Lackadaisical. They gave a simple order: “Do it.”

A column and arch ruptured.

The damage was distant and small enough that they only just barely heard it. It was also too high to really threaten anything’s stability. Wobbling, the column looked as if it might fall away from its arch, but remained standing.

“How many times can you do that?”

“Not sure,” said Ethel. “Eight? Probably more under duress. I feel naked, Nyx, can I please have my glasses back?”

They stayed waiting until the castle gates opened. Though they were massive enough to roll out catapults and cavalry, all that crawled out were slugs. True, they were hefty slugs -- the size of dogs—with spotted blue-and-yellow skin like a failed art project and congested, slime-drowned human faces made small by the sheer girth of their head-necks.

They had no limbs and, truth be told, Nyx wasn’t sure how the slugmen attacked foes, let alone claimed captives. That question was partially answered by a handful of other minions leaving the castle with them. Above them: they looked like miniature flying dugongs, with wings and arms awkwardly and perhaps painfully grafted onto them. The webbing of their wings was holey, patched, and slimy enough to shine like cellophane.

Does it sound scary? No. But did it strike terror into Nyx and Ethel’s hearts? Also no. They had vivid memories of far worse. Poor villagers, though—these demons had marched straight out of a drug-addled nightmare.

Pouring from the gates, they fanned out and spread throughout Sogvush. The slugmen moaned and mumbled as they went, and the frantic wingbeats of the dugongs above them shattered any peace the night might’ve had.

The slugman roved like the world’s most ineffective tanks. One happened to slither, going one mile an hour, toward the bushes Nyx and Ethel were hiding in. With its single slug-foot (fun fact: slugs have one foot), it crawled onto the bush, and the bush crumpled under its weight. Nobody was there anymore.

The orders of the slugs and dugongs were, of course, simple: find and claim another beautiful youth, perchance to be Lord Melachrie’s mate.

Slugs threw their bodies against doors and howled. People gave cries of terror and outrage, tight embraces and delirious sobbing. It never was long before one of them surrendered their child. But the slugmen had to work for it, yelling in indescribable tongues and bashing themselves like clubs against mud walls.

The villages radiated out from its center—a center now dominated by the lord’s castle—and for the most part, houses and farmland were spread about evenly. Trees were rare, having been cleared away and pushed back. There was always someone in these villages, though, who lived in the arbors as if to spite city planning. Sometimes they were artisans, but often they were witches. A crowd of slugmen and a single flying dugong made their way to this northeastern wooded quarter.

Nobody noticed when a streaking black shape lightning-hopped from one of their shadows to the next. The shadowbolt made every move deliberately. It sought to land on the shadow of the one slug farthest from all the rest, the one on the periphery. One in a lot of shade and foliage...the better to conceal the noise to come.

Nyx burst from the shadow. The slug roared, but Nyx wrapped a slew of arms around its mouth and trunk, silencing it in a heartbeat.

“Listen,” they hissed. Unnecessarily, because the terrified slug was all ears. “Get me to the underworld and I’ll release you. Better yet, exalt you. You could have so much better. Your lord is working in a backwater. And she wants a human mate. Isn’t that disgusting?” The parallels between Nyx and Melachrie’s habits were for Nyx to know and the slug to find out.

The slug blubbered at first—like it was churning its mouth and hoping a response would fall out. Then it stopped, suddenly. Its leech-teeth clamped around its tongue. Quickly its face turned purple and its eyes drained of color.

The slug convulsed in Nyx’s grip. What started as a mere tremble became the paroxysms of an earthworm on the sidewalk. Hellsmoke escaped its mouth. Nyx let go and fled, knowing that if they stayed for a few minutes more, the slug’s body would disappear and leave a gem—and no doubt kill itself again if it got the chance to regenerate in Nyx’s hands.

So Nyx ditched this plan entirely, and thought, with a sigh, that they probably would have to liberate the village to get where they needed to go. The shadow skated on.