This program is brought to you New Realities Incorporated. Fantasy Tales Online headsets are available starting at seventy dollars and will transport you into a world beyond your wildest imagination! Live the fantasy life that you have always wanted to live. Kill monsters, raid epic dungeons, fight against other players in massive wars, sail the high seas and climb the tallest mountains, or just live an average life as a farmer! There is a world full of possibilities awaiting you!

“Rock, why do we keep on getting replaced?” Oleander asks, sitting upside down on the couch.

“First, it was a pervert getting isekai’ed without the truck. Then, it was a business man getting isekai’ed featuring a hurricane… but he got canceled before his show could even air. Then there were the giant robots and aliens, but they’re gone now. Then there was the dog. That damned dog – not you. You’re a good girl. I’m talking about that dog with the stupid name who swings around a bone as a sword. Like, doesn’t his neck hurt from all of that? That dog is going to get arthritis.”

Rock barks and raises her front legs to shrug.

“But wait! We’re not done yet! Then there was the guy getting isekai’ed by a dragon to go and live and ‘play’ in some sort of crazy world that doesn’t make any sense! Though, I have to admit it. If there was any other story that I’d like to be in right now, it’s that one. It seems super fun over there.”

Rock ignores him to chew on the bone that mysteriously appeared while he was ranting.

“What’s next? Something mixing samurai and Western themes together for some sort of yokai-hunting wannabe-cowboy story with cute romance but also horror? Or maybe some steampunk or clockpunk slice-of-life bounty hunter story set in a city high above the clouds? Some wannabe-Kirito punk who always talks about how he wants to die while clearing world firsts in VRMMORPGs? A guy getting isekai’ed, because that hasn’t been done yet, and then falling in love with a princess while setting up a zoo in another world? Or maybe the showrunner is going to attempt another “serious” story for some reason even though that obviously didn’t work the first couple of times that he tried, but this time it’s going to be about a wannabe World War Two in a fantasy setting with a healer or medic main character?”

“No! There’s no way that the showrunner can handle that many different series! Don’t you encourage him, Rock! You know that he’s going to be watching this later! If anything, there needs to be a series where me and you are the main characters! Now, let’s hurry up and move onto the first guest before anybody gets any weird ideas.”

Rock nods, sits, and points one of her paws toward the far end of the stage.

From behind the curtains walks one of the newest characters of the series: Eva.

Most of the studio audience seems unsure of how to respond to her, but there are several among the audience who seem to really like her.

Whether it is because her body is a mixed-and-matched combination of various monster parts, because she is an extreme thrill seeker, or because people are betting that she’s actually super kinky behind the scenes and are just waiting for that side of her to get triggered, she certainly has a hopeful base of loyal fans already.

“I’ve uh… never been in front of this many people before,” Eva says, sitting down on the couch next to Oleander whom is still upside down.

“Are you shy around large groups?” Oleander asks.

“Not really. It’s just kind of exciting since I’ve never been in this situation before. Not really sure how to react, either.”

“It’s okay. Just be yourself. We’re all dead on the inside here.”

“You will be once some other series starts up while you’re finally getting some love.”

“Did that happen to you?”

“Hah! That would require me to actually get some love. Did you see how much time I got in the latest season? I was there for a tiny bit at the beginning and then I didn’t get to come back until the very end! Everybody else went to go and do fun things while I was left behind! Even Rock got to join in on the action!”

“I’m sure you had other things to do while waiting.”

“Yeah, no. You know what we did? Me, Tabs, and Cor sat around playing cards, drinking, and reluctantly agreeing that the showrunner’s other series are actually kind of good. I hate that I like them.”

“So… did you have any interview questions for me?”

“Oh. Yeah. That’s why you’re here. How about… what do you think of everybody? Fenrir and the others?”

“They’re all really nice. They… tend to forget that others are around when they’re talking to each other, but I like how honest they are.”

“Yeah, we’re all kind of like that. Just wait until you see me and Cor in action! And I swear we better get some action soon, and I don’t mean the kind of action that all the edgy ‘where all the combat at’ fans like.”

“Thanks. I need all the support I can get right now. You know what? You’re really nice. It’s a shame that you’re going to have some competition.”

“Competition? What do you—”

And with that, the specific part of the couch that Eva has been sitting on leans forward and drops her into a hole in the stage’s floor.

Coming out from behind the curtain, using his wings to stay hovering above the stage, is GG.

“Showing off with your wings, huh?” Oleander asks.

“I am making sure that I do not fall into any sudden holes,” GG answers.

“Why? Holes are meant to fall into! Though, I have to admit that I prefer thrusting into them. And having them thrust into.”

“You are welcome to have your preferences. My preference is not falling into them, being dropped into them, or nonconsensually entering any hole in any way for any reason.”

“You’re starting to sound like Mr. Consent from the other series.”

“No, he’s daddy. But the point is that you have to sound more unique!”

“I see! Is this better, Oleander? Should I use my grand leader voice?!”

“Ugh. Now you’re just reminding me of the rock again.”

She goes back to lying down.

“Anyways! GG, what do you think about the upcoming battle?” Oleander asks.

“Ah, the one against the serpent and its army?” GG asks in return.

“Hmm. I am not sure. I do believe that it will be a wonderful and hardfought battle, but I am not sure how it will go. After all, let us not forget that two of the largest factions in the game working together were not able to defeat one of the serpents. We are far fewer in number than they.”

“Buuuttttt, there’s something that you guys might be able to do, right?”

“Right, but to go into details regarding that would displease our showrunner.”

“Yeah, you’re right. I’m not willing to pay the fine for spoiling anything. So, I guess that everybody will just have to tune in and see what happens!”

The floor opens up underneath GG.

The hovering man of a dragon looks down at Oleander with crossed arms and a smug smile… before a lasso gets shot, wrapped around him to stick his wings close to his back, and then he – well, and then he drops.

“So much for that! Let it be known that nobody can defeat the hole-in-the-floor master that is I!” Oleander declares as Rock yawns. “There’s one final thing before we can wrap this up!”

One of the stage assistants comes out from behind the curtain, rushes over to Oleander, hands him a letter, and then rushes back out of sight.

“Let’s see who’s this from… ooh. It’s from somebody whose name starts with the letter A! I wonder who this could be from? Should I read it? Hmm… nah. Don’t get me wrong, I’m tempted to share it, but I think not sharing the letter that she intended for us to share will be a good test for her new self! I mean – what?” Oleander teases, pretending to zip up his lips after that.

The zipper must be a very weak one since it fails to hold his lips together for more than a few seconds.

“Alright, everybody! That’s it for now. I might not have been in a great mood this episode, but that’s because I barely had any time last season! This upcoming season, though? Just you wait! I’m going to make sure I have so much time in it! Me, Cor, and Rock are going to dominate this time! And I don’t mean we’re going to be dominating each other! Well, Me and Cor will be. Rock won’t be involved in that. That’d just be weird. Anyways, I hope that you enjoyed this episode of The True Talk Show, and this upcoming season is promising to be one of the best yet! But don’t get your hopes up. The showrunner doesn’t like to get people’s hopes up since that adds more stress to him. But, I’m telling you on my honor as the showrunner’s only trap so far that it’s going to be great! There’s going to be drama! Kind of. Action! A little bit. Slice of life! Tons of it. Me! Even more tons!”

“Wait! I’m not done hyping everybody up yet! I have to make sure that everybody is expecting tons of me so that the showrunner will be pressured into giving me as many appearances as possible! He needs to feel the peer pressure!”

The camera switches over to Rock as Oleander’s microphone gets cut.

Rock waves into the camera, barks, and the screen goes black with a message thanking everybody for watching.

Then a commercial for the showrunner’s newest series pops up.

This was a short chapter since it's an epilogue chapter for the volume, but the longer chapters will resume next week!

Also, lately I've had more people unpledge from Patreon because they don't want to support Patreon as a business and have had people asking me about alternatives such as SubscribeStar. Would anybody actually be willing to sign up on SubscribeStar if I made one?

I've also got some concept sketches done for two characters from my series currently exclusive to Patreon which can be seen in the spoiler below! The series will be coming to Royal Road and the like soon-ish, but if you want the waifus now, you know where to go.

Credit goes to ErosPanda for being as amazing as ever! 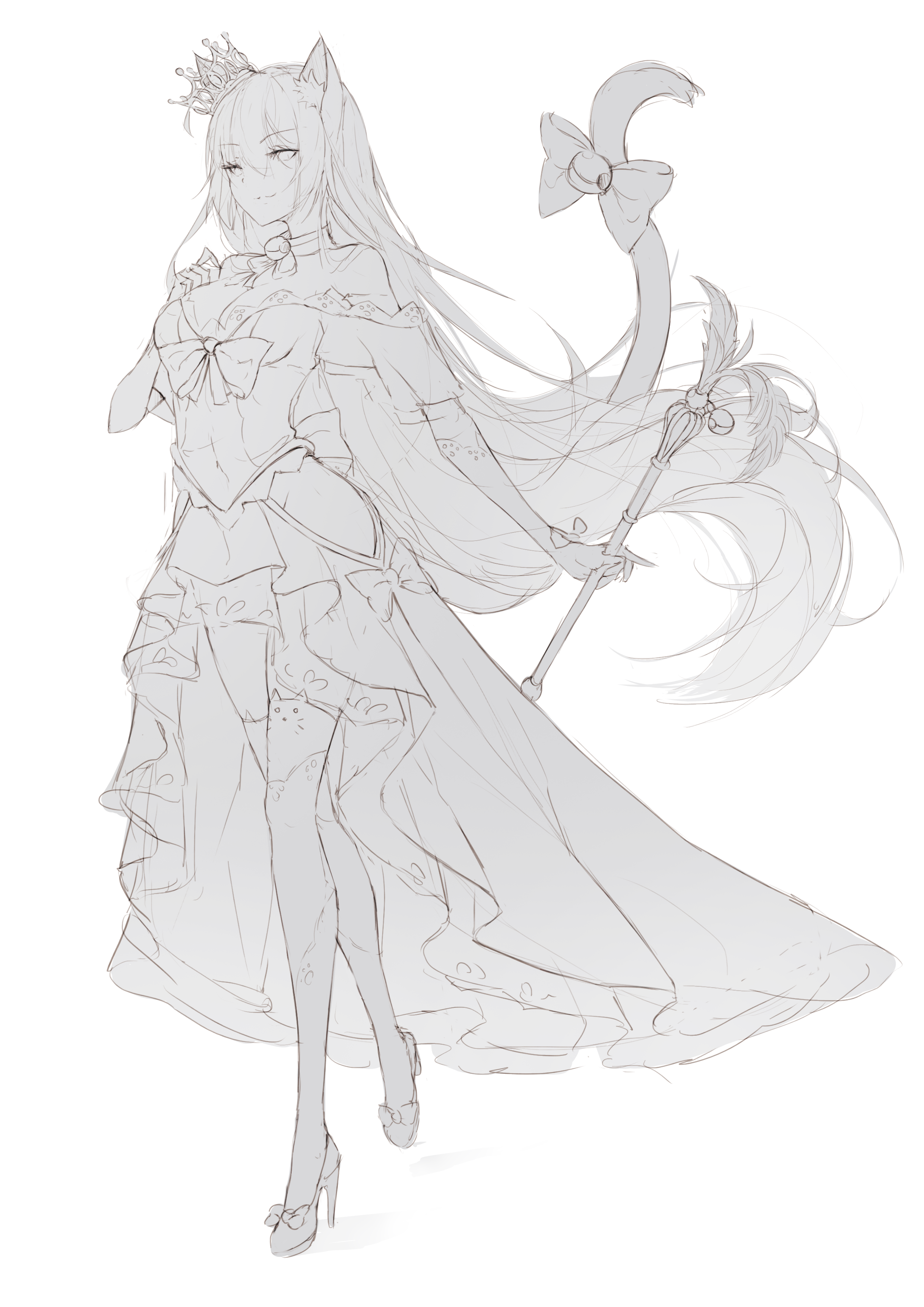 Thank you for reading!

The True Endgame
Oldest | Recent
Search
Your changes has been saved.
Action Required