Those, however, were absolutely not commonly used since they were too close to assassination techniques and most cultivators did not like learning those.

While not perfect, they should suit Xie Yi quite well with some adjustments.

“Let’s try one motion”, Shi Yue tried to cheer him up before explaining.

The disciple listened quietly, his face lighting up a bit when he realized this was not going to be as hard.

He quite liked the way that Shi Yue had begun to act after waking up. Although he hadn’t looked happy at Xie Yi sneaking out, maybe he now trusted him more, seeing as he came back from the outpost?

Either way, Xie Yi was enjoying the new treatment and especially this type of training. It felt like Shi Yue was truly looking at him now and not forming him the way every other disciple would be formed.

When Xie Yi started to change from excited to downright giddy at the third movement - it was supposed to send a shock through your opponent's legs that would shortly make them unable to stand - the white-haired man decided he might as well sit down and watch. His disciple certainly was not planning on slowing down anytime soon.

While Shi Yue had outwards been less injured than Xie Yi, his general state had been worse. Even now he could feel the heavy exhaustion and drowsiness.

Xie Yi was happily jumping around to practice, his face glowing with honest joy.

...It would have been nice to have that kind of person with him, back when he was still a disciple. Learning together would certainly have been fun.

But thinking about it… What did Xie Yi even like about him in the first place? He must have taken an interest in him in that other timeline, but why? They were on opposing sides with very different lives.

“Xie Yi”, Shi Yue called out curiously. The youth snapped his head around to look.

“Why is it that you’re so fond of Xiao Jin?”

That made him pause. Fascinating how he liked the paper-man enough to even stop practising for a moment.

Xie Yi breathed in and Shi Yue instantly regretted it.

What followed was a barrage of praises that started at the paper-man’s abilities - understandable - and then derailed completely into what Shi Yue noted was fully Xie Yi’s impression of Xiao Jin might be like as a human only based on a few true facts.

Summarizing: Xie Yi held a certain amount of respect for strength, but what he absolutely adored was the kind of knightly image that Shi Yue never would have thought he would hear a grown man talk about.

It seemed that what Xie Yi liked about Shi Yue was that the Grandmaster was genuinely trying to help people and spread peace.

Noticing that something that others often found ridiculous was what made Xie Yi like him in the first place, moreover something that he himself found so important, was overwhelming.

Xie Yi had a face thick enough to show his embarrassment and stand in front of you with a flushing face, but Shi Yue didn’t.

He hummed and leaned onto his elbow, placing his hand so that it would cover as much of his face as possible while he stared on the ground.

Xie Yi did notice his master looking awkward but he didn’t know why and with Xu Yan so often warning him about blatantly revealing what others didn’t want to be known, he kept his mouth shut.

At least he thought that Shi Yue didn’t look as if he wanted this to be asked about.

“Shi Yue, can I try some of these with Xiao Jin?” Xie Yi hopped over and squatted before his master, looking up. He knew that Shi Yue was not fully healed yet so he did not ask to spar with him.

Shi Yue considered the drain of spiritual energy and nodded. “For a while should be fine.”

While they fought, Shi Yue watched with a relaxed expression and sometimes commented to correct movements that were too remnant of the Demonic Sect. Other than that, he let Xie Yi do as he pleased.

A knock at the door made both of them stop.

The door opened - this was a training hall, not a study, no reason to be overly courteous - and the sect leader stepped in.

“Sect leader”, Xie Yi and Shi Yue both greeted, with the formed performing a short bow and the latter only standing up and giving a nod.

“Shi Yue, Xie Yi”, the sect leader greeted back and walked inside. Someone was following him, earning a critical glance from both cultivators.

It was a young man who should be in his mid-twenties. He was wearing cultivator’s robes and a sword on his hip and moved slowly but elegantly. His face was neutral but with his naturally upturned lips, he looked very kind.

Shi Yue frowned slightly at the stranger entering his place but as he came with his master, he did not say anything.

The sect leader did not look at Shi Yue. Instead he kept Xie Yi in his eyes with a very complicated look despite talking to his own disciple.

“This young man here is Xiang Zhe. He is from my brother’s line.” The sect leader cleared his throat. “Due to some issues, he will be staying here for a while.”

Shi Yue knew that his master’s brother had not been a cultivator. Although the sect leader did not interact with his descendants too much, he did protect them and was in contact. It wasn’t weird that they might send over one of their children, especially if he was a cultivator.

“A special body constitution. He has caught the eye of the Demonic Sect so we have to make sure he is safe.” The sect leader made a long pause, his eyes sticking to Xie Yi. “I fear I won’t be able to protect him - I am too close to a breakthrough and not exactly in the condition to watch over another person. It won’t be much of a hassle, so I hoped you could keep an eye on him.”

The young man wouldn’t truly leave the sect with how the situation was, but Shi Yue could imagine how it had gone.

Since he was in the sect anyway, he could just train a bit with his relative’s disciple right?

He had no doubt that this was something that the sect leader’s family had asked him to do and it was truly hard to reject such a simple favour. It wasn’t like he was asked to take him in as a disciple, it was only to keep an eye on him and help out a bit.

But… Shi Yue looked over to Xie Yi. Now he understood why his master hadn’t been looking at him.

Xie Yi had, with the mentioning of those words, turned from the sweet young man he looked like to a very angry, very murderous and very hostile cultivator.

Xiang Zhe, who had been very obediently standing by the side silently, looked quite surprised at the sudden hostility in the air.

No, no. His master was his own person. And this was a favour for the sect leader. It was his decision. There was nothing wrong about that.

He knew that so he did not say anything, but he was truly unable to hide the possessive snarl he was showing.

“...This is a better reaction than I expected”, the sect leader said with surprised delight. “Your disciple truly has grown. I remember him nearly jumping me to tear out my throat when I had even done such things as mentioning you having children and the like before.”

“Yes, his self-control has increased a lot”, Shi Yue agreed with an awkward cough. “Xie Yi, come over here.”

Xie Yi went to stand behind his master to growl, a good two people between him and that other guy.

I'm adding so many chars right now........ I got a feeling they'd have way more screentime if I edit this story and write additional scenes for pacing xD 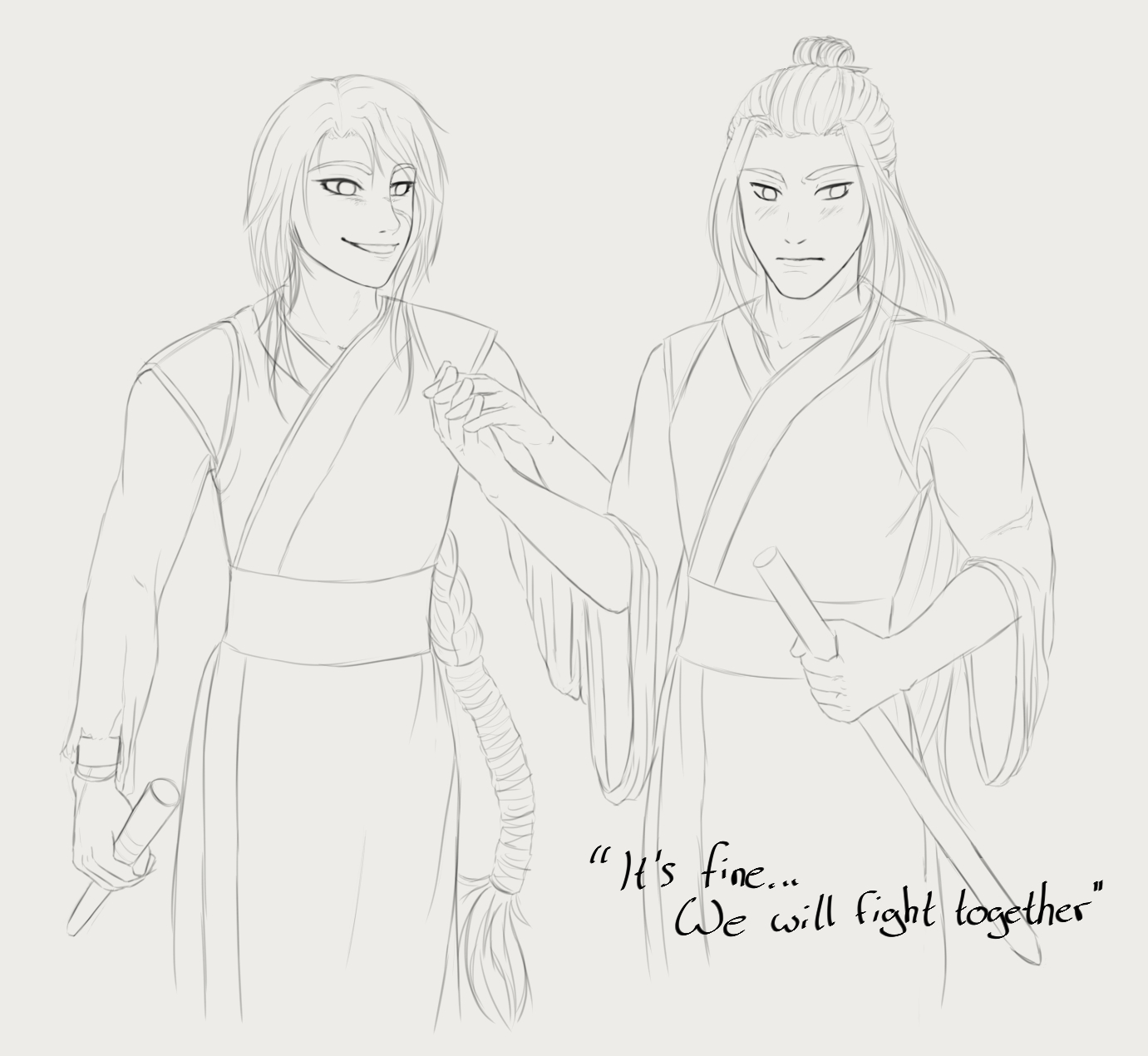 I liked this sketch so much I wanted to add it here and on kofi. Adult Xie Yi and Shi Yue are pretty much the same height. Xie Yi is only 3cm smaller, at 182, and Shi Yue is 185. That said - Mingtian is 193 (yeah he's pretty damn tall) and Xue Hua is 176. My artstyle isn't as conistent as I'd like right now but I'm having fun!