The bundle only reacted to his prodding with curling up tensely. He stopped and it nuzzled back against him.

Once he reached the sect, he got to a quiet corner around the higher grounds and worriedly stared at the bundle. It yipped and cocked its head.

He hopped over the wall carefully, watching the bundle to make sure it wasn’t frightened by the jump.

Contrary to his worries, the bundle flapped its tiny wings as he jumped. Xie Yi laughed.

The child didn’t have a real scent as far as he could tell. The flowery scent must have been from the cave, as it had vanished during the walk back. Now it smelled like nothing, so he was not surprised that Mingtian only reacted to him coming in, fully focused on Xue Hua who was tiredly blinking in the bed.

“Sorry, kid. I know I haven’t had time for you...”, Mingtian blindly greeted, trying to help Xue Hua up into a sitting position.

Excited, the bundle in Xie Yi’s arms twisted around to look at the bed. Its ears twitched.

“I’ve brought you someone who wanted to come by on their own”, Xie Yi said loudly and with amusement. At the same time, the little one yipped in greeting.

Both Mingtian and Xue Hua whipped their heads around with unnatural speed and froze.

Xie Yi carried the bundle over and placed it onto the bed. A bit unsteady, it waddled over Xue Hua’s legs to his chest and flopped down on its hindlegs with a happy whistle.

The two spiritual beasts were stiff with surprise, obviously overwhelmed.

“Hey now, the little guy just got a huge fright”, Xie Yi scolded softly, not daring to raise his voice. “Aren’t you going to greet them? They’ll think you don’t like them if you continue being frozen.”

That snapped Mingtian out of it at least.

He reached down carefully and picked the feathery ball up. It struggled a bit, moving its paws so that it could claw them into Mingtian’s clothes and hang on his chest while excitedly licking over his face and hair.

“What happened”, he forced out, obviously confused. Gently he placed the child into Xue Hua’s arms, who was weakly reaching out for it.

Maybe sensing that its mother was weak, the bundle was very careful in nuzzling itself against the man. It clumsily tried to burrow itself into his clothes while keeping its face up against Xue Hua’s hair.

“Must have gotten out of the cave. Nest? Whatever was behind the barrier on the mountain. I found a beast trying to eat… him? Her?”

Xie Yi felt him quiver softly. Beyond them, Xue Hua broke out into a worried sob.

For the next minute, there was only the sound of choked crying and the little bundle yipping and whistling in worry. Mingtian didn’t move for this time.

“It’s fine now, don’t worry about what could have happened”, Xie Yi laughed. “Give him a name already! I don’t know how to address him at all.”

Mingtian let go of him, turning back to his mate and the child on the blanket.

“You do”, Xue Hua whispered from the bed, looking up with tears running down his smiling face. “You give him one.”

“I agree”, Mingtian mumbled into his mate’s shoulder. “You’re his uncle and you saved him. You give him a name.”

Maybe the little one knew what was happening, as he turned around to look at Xie Yi with the tip of his tongue hanging out.

Xie Yi flushed bright red under the collective, warm gazes. Now it was his turn to feel his eyes burning. “...If it’s a bad name, then you have to choose a new one!”

“Say it first”, Mingtian laughed hoarsely, rubbing over his eyes and letting go of Xue Hua to caress his child.

“Then… How about Su Liang? Written as ‘unadorned’ and ‘clear’?” He awkwardly lowered his head between his shoulders. The little guy was almost completely spotless, so he felt that it was a fitting name.

“Xiao1As a nickname, meaning "little" Liang Liang, is it, then”, Xue Hua agreed and Xiao Liang wobbled to the other edge of the bed, towards Xie Yi, while wagging his feathery tail.

“I don’t know how to react to this”, Xie Yi said, somewhat choked now, too. He lifted Xiao Liang up and the little one nuzzled his nose against Xie Yi’s.

“It’s your child, so how come I want to cry?”, Xie Yi asked, a bit desperate and blinking rapidly. “Why is he even so stupid? He’s not wary at all!”

“Because you’re the uncle. He’s a new member of your family”, Mingtian shouted, lightly hitting the back of his head. “I’d be mad if you weren’t touched!”

“Well, how come I did not know I was going to get a nephew until just now?!”, Xie Yi growled back, sniffling.

Xue Hua lowered his head. “We… were not sure if our child would survive. Mingtian is already a crossbreed and our species are vastly different so we were not sure if it could manage. We did not want to tell anyone until we were certain.”

“He looks pretty chipper”, Xie Yi commented, holding Xiao Liang up into the air. “It doesn’t look like there are any problems. He looks a bit like Mingtian with wings.”

“It’s good that the genetics mixed like that”, Mingtian sighed. “Imagine the problems that could have appeared if he had a beak but canine’s teeth.”

“Oh”, Xie Yi said blankly. Now he was understanding what they had been worried about.

One way or another, Xiao Liang was born perfectly healthy and without any deformities.

The child lolled out his tongue again and moved his tiny wings a bit. He was visibly enjoying being held up high, although he did not forget to regularly twist the tiny head to check up on his overly touched father and mother.

“I think I’m forgetting something”, Xie Yi muttered to himself as he brought Xiao Liang back to his mother. Xue Hua took him and used a single finger to carefully tug out the small wings.

It looked like he was checking on them, maybe searching for problems.

“I… Can you call Yue over?” Xue Hua coughed a bit, leaning back into the pillow. He kept on ordering the child’s feathers.

“Ohh!” Xie Yi exclaimed loudly and the child jumped in surprise. He raised all of his feathers up as if they were fur and turned to face Xie Yi in confusion. “Shit! Right! Shi Yue!”

Were the two hours over already? He had walked slower on the way back, but he had gone back earlier than one hour, so there should have been more time.

Worried, he jumped out of the window to rush into Shi Yue’s study.

The Grandmaster pulled a face at the ink blotch on his notes. Goddamnit.

“You’re not too late, no need to hurry-”

“I found their child!”

“Can you please give me more info!”

Getting louder and louder, the exchange did not really carry much information, so Shi Yue put away his things and simply followed his disciple.

Five minutes later, he was twisting his body in hopes of a little bundle of feathers not falling down his back as it tried to turn his hair into a nest on Shi Yue’s neck.

Shi Yue’s face was showing a variety of emotions. If he wasn’t so distracted being worried about the little guy falling, he would have had a lot to say. In the end, he held back most of it. “Allowing Xie Yi to go out today was a very good decision. Can someone please make sure Xiao Liang isn’t falling? I can’t see him.”

For some reason, Su Liang was madly in love with Shi Yue’s white hair. If he didn’t twirl it around himself, he was biting on it and Shi Yue, being the child-lover he was, had absolutely no complaints.

Have a fluffy feather ball. I can't draw animals for life, so I needed to trace a base from "One room dog" for it to work >_> Tracing isn't a good thing, so this image will be here only and not on Kofi or anywhere else... Anyway, he is very round. Very. With tiny wings. Very huggable. Right now, he's only as big as a puppy, and absolutely not as graceful as the feather dragons you'd see on google. Bluntly speaking... Su Liang's role is less important in this story itself as it is for the planned extras once it's over. Until then, he's going to be not comic, but fluffy relief. 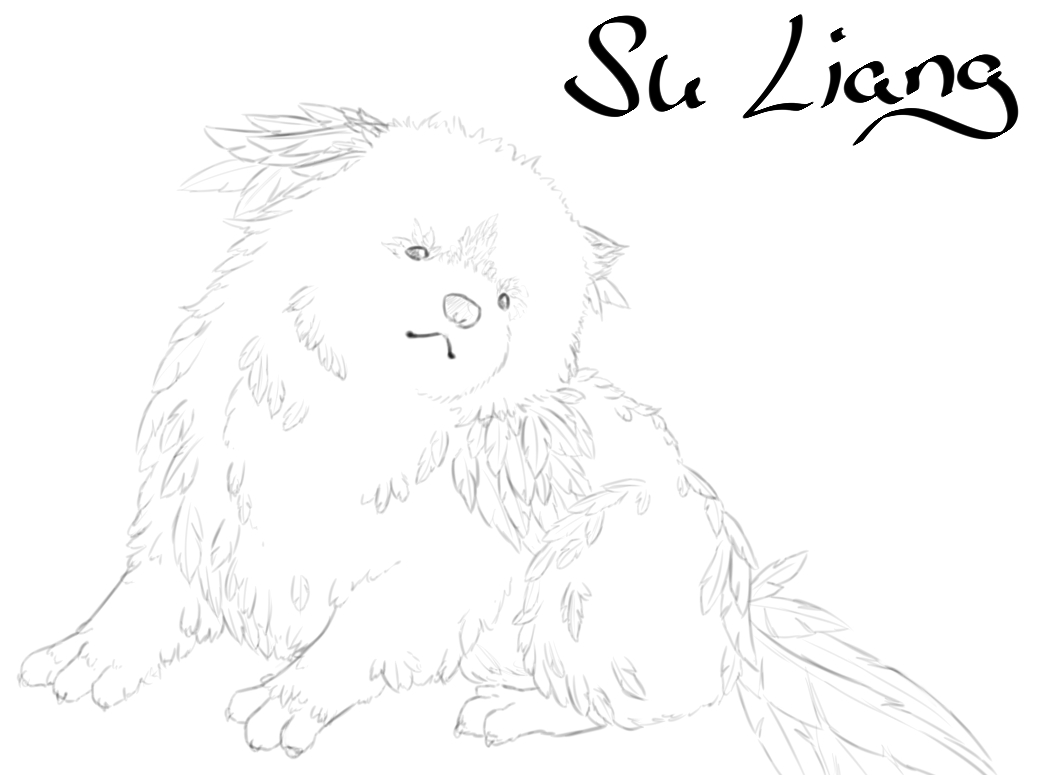