“I don’t know what exactly is going on, but thanks! Those look great!”, Xu Yan exclaimed, confused but happy at suddenly getting pastries from Xie Yi. He hadn’t shared any of the food before and Xu Yan hadn’t wanted to ask, so it was a bit weird that he suddenly gave him those.

Whatever Xu Yan had done, Xie Yi looked happy - so, whatever. Good, free food and a happy Xiao Yi were a great combination, he wasn’t going to question anything.

He didn’t hesitate to start devouring the sweet treats. The sugar stuck to his fingers, white and powdery.

Xie Yi was in an obviously great mood. After eating and moving around a lot, his body was beginning to call for rest again, but otherwise, he felt satisfied and calm.

“You can have some of my usual meals, too”, Xie Yi suggested, leaning on his knees with a sweet smile.

Xu Yan looked up, swallowed, and then shook his fluffy hair with a grin. “Don’t, that’s yours. But I’m happy that you’d let me!”

Xie Yi tilted his head a bit, humming. So, even just suggesting it had made Xu Yan happy? Thankfully, Xu Yan had started explaining his emotions these past months - he often said clearly whether and why he was upset, downcast, happy or anything else.

It had started since Xie Yi was unable to figure out his moods by himself and couldn’t react even if he wanted to. Once Xu Yan had noticed - which didn’t take too long -, he had begun to include mentionings of his moods whenever he felt that it was important or just remembered to do it.

It made Xie Yi feel safer in their interactions. He would have liked doing the same with Shi Yue but hadn’t done it yet because he didn’t know how to ask. Xu Yan had started it by himself, after all.

“You know, I think those guys from before are those you are supposed to teach”, Xu Yan said into the silence while licking his fingers. “They seem like good people. Don’t press them too hard.”

“Why?”, Xie Yi asked. It had become his favourite word during the course of this year. It was incredibly useful. As he had noticed, other people were usually willing to explain a lot of things as long as you made them realize that you had no idea what they were talking about.

Xu Yan never tired of talking. “Your talent and hard work are completely overwhelming. Not everyone can keep up, and some will feel bad if you expect them to reach the same levels that you have. It’s uncomfortable to be compared to people better than you.”

“Doesn’t make sense, but I guess I’ll just accept it like that”, Xie Yi responded, his eyebrows tightening. “Hey, Xu Yan, is it just me or is it really hard to get along with people?”

Mingtian huffed out some air. Xu Yan stopped his movement of putting away the empty plate and just looked at him.

“Yes”, he said very slowly. “That’s why most people only have a few close friends. It’s hard work to keep up good relationships with people.”

Outsmarting a dragon had been one of the things that Xie Yi had thought of as the hardest moments in his two lives. Now, going through all the rules and comments that he had gathered in his repeated two years…

“Isn’t there a way to make this easier?”, Xie Yi cried out, troubled.

Xu Yan rubbed his neck. “I mean, there are people who are so nice that they shoulder pretty much all of the burdens. If both people are compatible enough and one always gives in for the cases where you don’t match, then relationships can also work despite one person not doing anything. Generally, it’s healthier for both people to share the work, though.”

Xie Yi’s mouth formed an ‘Oh’ and he glanced over at Mingtian sleeping next to him. Alright, now he felt a bit bad. Maybe it wasn’t such a terrible thing to invest some time in keeping relationships good. Wasn’t it worth it for the people he liked having around?

“Okay, so it’s… Feng Yan, you, Mingtian, Shi Yue… I guess Li Mei, Ying Hua and Xue Hua, too. Is seven okay? Is that realistic?”, he counted, pointing at his fingers.

“Realistic for what?”, Xu Yan wondered.

“Hmm, working on getting along. Is it realistic to keep up a good relationship with seven people? Although the first four are the most important”, Xie Yi said with a very serious face. He couldn’t tell if he was reaching too far. He could cut it down to Feng Yan, Xu Yan, Shi Yue and Mingtian, but not any lower than that. If it wasn’t realistic, then… then… he’d just have to find a way.

“It’s realistic!”, Xu Yan said loudly as if Xie Yi might overhear him. “Definitely realistic! ...I was on that list just now, right?”

Whenever Mingtian had woken up, he now began to move. Climbing up Xie Yi, he licked Xie Yi’s face.

The other boy’s red eyes were twitching around in confusion, quite lost.

“That’s… good”, he responded slowly, looking around between the two of them. He should ask Mingtian about what was going on here at some time. Feng Yan had told him that being confused was normal, but he couldn’t just give up learning. Well then, he would have to ask, because he absolutely couldn’t figure out these things on his own.

“I’m really happy that I ended up approaching you that day”, Xu Yan laughed embarrassedly. “I was kind of awkward with everyone else. It’s good that you came.”

Xie Yi gave a small nod. “Un. I probably wouldn’t have tried talking to you.”

“Ouch”, the boy snickered. “But yeah, I understand. You really are bad at approaching people, and it has already gotten better in this year. I think the whole teaching stuff will help with it, too.”

Xie Yi paused to think for a while, then pulled Xu Yan to sit next to him. “Hey, tell me what I should do. Like today, when you told me to explain it more or help them get into position. What would be good things to do while teaching?”

Xu Yan took the place right next to him, happily going through some common social interactions.

Mingtian watched and listened proudly. Although Xie Yi was bound to mess up a lot and not remember everything perfectly; bit by bit, he would learn how to manage these situations.

The next day, Xu Yan accompanied him to the training grounds. As he had another short time before his own lesson started, he wanted to be there for the beginning, at least.

Mingtian was sitting in a corner, in the shade of a tree, obedient and quiet. Some disciples curiously looked at him but didn’t inquire.

The tall teacher - a woman with shortly cut hair and powerful aura looked down on him like an ancient war goddess, wrinkling her eyebrows a bit uncertainly.

“You are smaller than I thought”, she said bluntly, holding the gaze of the boy in front of her. The child stared back blankly - not wavering at all, not really caring about her oppressive aura. She liked that. He was just very young.

The group of newcomers, all just disciples of the early first stage, were staring at him, too. Some with curiosity, some quite friendly - the ones from yesterday -, some with disdain - mostly the older ones.

Xie Yi ignored them completely. He was supposed to listen to the teacher. The teacher hadn't told him what to do yet. So he was waiting.

Xu Yan hooked a hand into his collar and pulled him back a step.

“Teacher”, he said apologetically. “Xiao Yi isn’t too good with people, please don't take offence. He really is good at what he does, though.”

He flapped his mouth open and close, hesitantly. He wanted to speak up for his friend but it was a bit hard.

“It’s fine, I heard about him”, the woman hummed. Grandmaster Shi Yue’s disciple, obviously. And also the boy that might bring them to war with the Zhu family. She wasn’t against it - they were a group of pretentious people - but she had to weigh the options. In the end, she had agreed, though.

“Alright then”, she ultimately said, clapping her hands loudly and calling all disciples to attention. They straightened their backs and looked towards her. The group wasn’t too large, so she was the only teacher.

“We will be doing the lesson as usual, but you can also ask your Senior, Xie Yi, if you have questions. There isn’t only one path towards your goal, so don’t hesitate if he suggests you other ways of practising.” - If he talks bullshit, I will stop him; she added mentally.

Everyone thought of the whole thing as a bit ridiculous excluding the group that had met him. They were breathing in deeply, steeling themselves.

A few minutes later, the teacher held her stomach in laughter as she watched the dozen students on the ground, wailing and unable to detangle themselves from the funny positions that Xie Yi effortlessly twisted himself into.

“Senior!”, one of the people from before cried out. “Senior! It hurts!”

“Then stop it when it hurts.”

“I can’t get myself back to normal! Please help!”

“Oh.” Xie Yi walked over and slowly pulled at the leg of the disciple. A moment later, the figure collapsed and the boy could breathe again.

Seeing how it worked, everyone else began to cry out for him, as well.

You might be able to guess: This is the first time Xie Yi has, in any way, verbally mentioned liking Xu Yan, lol. Poor boy

I'm a simple person. I got fanart, I'm happy. You all are getting a random extra chapter tomorrow  ¯\_(ツ)_/¯ You can check it out under the spoiler or at "Aurawolfgirl2000"s Twitter~ Thank you again for it!! (If you'd like me to take this out btw, just tell me xD) 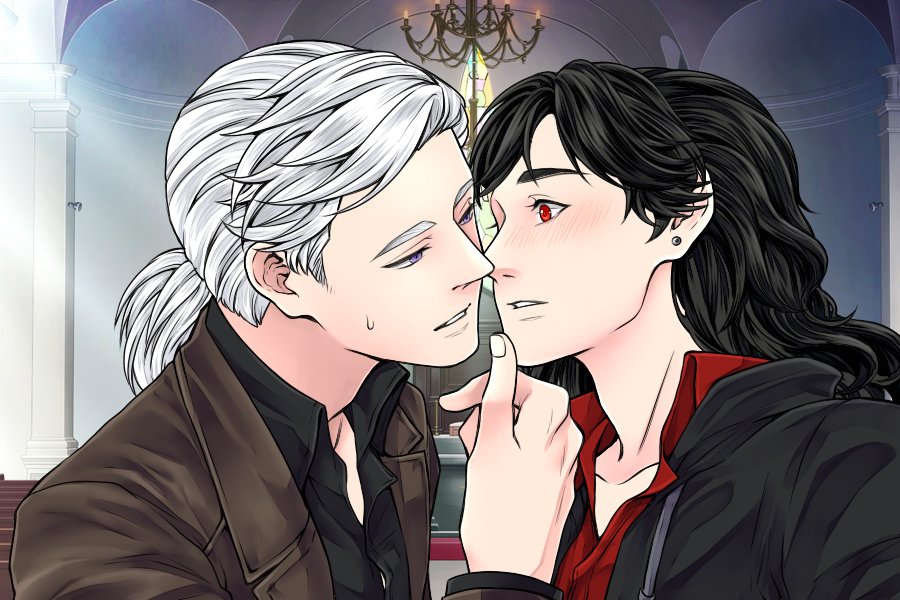 "Shi Yue and Xie Yi from The Grandmaster's weird disciple, inspired by the Halloween special.
Shi Yue: .....You know you're supposed to close your eyes, right?
Xie Yi: *XieYi.exe has stopped working*"