Shy female cultivators had their fair share of willing bodyguards around but weren’t shy males disdained? Why was this one being protected?

He let the topic fall, thinking about how to get what he wanted.

Someone mumbled a sentence behind him, too inaudible to make out the words. Shortly afterwards, there was another sound.

Zhi Nan glanced back but saw nothing.

Once he turned back to the front, Xie Yi threw a hurt glance at Xu Yan and rubbed his painful side.

The rest hadn’t heard the words but had seen Xu Yan throw an elbow right at Xie Yi and could roughly guess that it mustn’t have been kind words.

Sheng Mu had a headache.

That Xie Yi was such a strong cultivator. He could not, by any means, understand why he didn’t act like one.

The powerful should show it. He could proudly walk around, could order others to do his bidding, could get better food and resources, did not need to mingle with the weak.

Why, why, why was this one so different?

Why did he not care about status? Why did he stick to that little Xu Yan who was not even blood-related and whom he owed no help?

Why did he not use his status as a primary disciple, and that of Master Li’s, instead doing such nonsense like acting weak in this foreign sect?

Because it felt like he, who wanted to win against Xie Yi, was acting like a toddler compared to an experienced master.

A child throwing a tantrum at someone who was above even his aspirations.

He would have felt better if Xie Yi was like everyone else. Even if he lost, he wouldn’t feel so bad if Xie Yi looked proud to win or showed any other reaction other than it being a random pastime.

His master had given him an earful for the last time he had snapped during lunch and nearly gotten himself badly hurt for slapping Xu Yan.

He had suggested something that was working pretty well up until now: Forget Xie Yi’s age. As long as he thought of Xie Yi as someone without age, he had much less trouble acknowledging him.

Since, honestly, the other could easily be regarded on the level of a teacher as long as you did not consider his age.

At least he wasn’t as tempted to constantly hit the disciple as he was before.

QingQing gazed up at the conflicted face of her cousin and lowered her head slowly. Sheng Mu had watched over her since they were children and she was sad to see him suffer so much under the pressure of their family.

If she could befriend Xie Yi, it would be good.

Or maybe not exactly befriend.

...People knew that Xie Yi had a limited attention-span for people and the few he called his friends were already taking up all of it.

“I don’t want to take a bath, I’d rather go swimming”, Xie Yi kept on conversing with Xu Yan. “It’s warm enough. Let’s go? I want to see the city. Or go into a bathhouse, I haven't seen a real one before.”

“Why do you want to wreak havoc in a bathhouse.”

“Do you want to explore the city? I do not have anything planned for today, I’ll be your guide. I also know some nice spots for swimming”, Zhi Nan interrupted without consideration for Xu Yan.

The smile on the brown-haired boy’s face stiffened, the silent groan barely held back.

Xie Yi lowered his head and intertwined his fingers as Xu Yan had suggested.

Who had invited that annoying fly. He didn’t want that guy to keep on following him around. He was…

Xie Yi couldn’t quite describe it. It took him a moment to wrap his thoughts around what was disturbing him.

Yes; he was obviously trying to make a move on him, but in a condescending and scheming way, that’s what it was.

In the Virtuous Sect, there were two types of people trying that, according to what he had started to filter out.

The more intelligent ones that tried to get into his good graces and were ignored.

The less intelligent ones who tried to use force.

Either way, people did not try to hide it very much.

Guys like that whatever-Nan were rather disgusting. Wasn’t he trying to cheat him into something? Good thing he was informed now.

“We don’t want to take up your time”, Xu Yan said with a crooked smile.

“Oh it’s no problem at all. I wanted to go to the city, anyway. Besides, you’re our guest - this is common courtesy.” - I don’t care. I’m going.

“I understand… Then, I promise to not pressure him.” - Walking a step closer or farther away, you’re not getting rid off me.

Zhi Nan smiled back in a very dishonest way.

Sensing a well-hidden hostility rise from the stranger, Xie Yi reached out to tug at Xu Yan’s sleeve. It was better to let the guy tag along than to risk him doing underhanded stuff to sabotage Xu Yan.

Wasn’t it just an extra fly? He could live with that.

Xu Yan looked at the admittedly very adorable and heart-wrenching sight of Xie Yi pulling at his sleeve with slightly pouting lips and upturned eyes.

“Okay, we will go together”, he gave in, fully relying on Xie Yi’s decision.

At least he proceeded to diligently show them their rooms before he waited at the entrance for Xie Yi to come out so that they could go into the city together.

In the room, Xu Yan shortly stopped Xie Yi. “Is it going to be alright?”

“What could happen? It’s fine. I want to do some shopping and visit a bathhouse, that’s all.”

Against Xie Yi’s nonchalant shrug, Xu Yan frowned. “If you go into a bathhouse, he’ll definitely take the chance to stare. Are you fine with that?”

He did not like people staring at him like that but there was nothing he could do about it (because tearing their eyeballs out was not allowed). Whether he wore clothes or not, the stare would be the same, only more intense.

As long as he didn’t come over and try to touch him weirdly, he’d ignore it.

“It’s fine”, Xie Yi said with a nod. “But if someone tries to touch me with intentions, I’ll tear off their fingers.”

“I’m skipping the breaking. I’ll directly tear off whatever body part touches me.” He paused. “On purpose.”

“Uh, let’s try not to tear humans to pieces on the bathhouse, okay? I’ll keep them away from you as far as possible.” Xu Yan felt the sweat run down his face.

It was going to be like placing a piece of meat in front of a pack of wolves and trying to keep them away.

Only that it wasn’t because he didn’t want the meat to be eaten but because the meat would dissolve them on contact.

“Will Mingtian come along into the city?”

“He will be roaming around”, Xie Yi said as he left the room. He rolled his head around his neck and then lowered it again - the unusual position was straining his muscles a bit.

As they stepped outside, a female cultivator was standing next to Zhi Nan, who hand a neutrally kind look on his face.

The girl turned to them and smiled with a flush. “Brother Yi”, she called out intimately.

We are having bad weather and it's draining me, ugh. Juxian's sketch is still being worked on because he's one complicated little bastard (*glares). You can see a WIP under the spoiler, though it really is a WIP. There's still so much that needs to be drawn and in the end, I'll need to go over all colours and shading again to fix it up - for example, the hair shading isn't good yet. On that note, if anyone here thinks 'huh that ribcage anatomy is wrong', I'll hit them and point back to Juxian's intro and what's being said there. :P He looks a bit like a little pirate, but I think that's cute xD
Spoiler 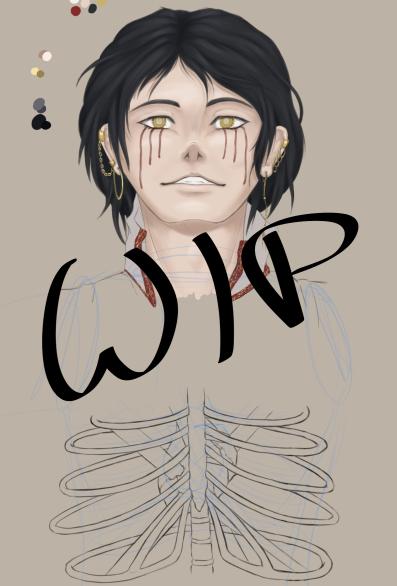