After sleeping in the house, Hera left to them, Ai and the Artemis Familia returned to Orario.

Since they couldn’t stay with Astraea, Cirrus had bought an empty home inconspicuously with cash near where he lives, but it hasn’t been refurbished or renovated as of now.

“Yeah sorry! We didn’t have enough time to furnish the place!” said Ai.

“It’s fine, everyone. Let's clean this place up, and then from there we will plan what we are going to do next.” Said Artemis.

“Excuse me.” said an elf in a black uniform and red cloak covering the bottom half of his face. “You are Lady Artemis, correct?”

“My name is Lissos, a commander of the Apollo Familia. I apologize. I have come to give you an invitation to Lord Apollo’s banquet.” He hands out a letter with Apollo’s emblem. “Lord Apollo said to walk in and give it to you, my lady.” He said, bowing his head.

“I see… I will consider it. Now go and tell Apollo if he does this again, I’ll shoot an arrow into his face.”

“Of course! But I won’t give you the surprise!”

“I’ll take the banquet! I always wanted to—ah wait… didn’t he say he wanted to be inconspicuous for a bit?”

“Well, I’m sure he wouldn’t mind going to some banquet! Besides, there is only one person he liked to avoid.”

“Yup! So I’ll go get him over so the conversion can be done and over with!”

“Any odder than the goddess of chastity getting married?” said Rethusa.

“Yup, especially when you already had your honeymoon.” Said Phi.

“Hmm… I’ll let this slide. I expect this house to be shiny and clean with furniture when I come back!”

When they arrived, she could see Cirrus collaborating with the other smiths on improving the Colosseum.

He turned to see them. Ai was waving enthusiastically while Artemis waved normally.

“Sorry I’m so sweaty. I’ve been working for a while now.”

‘Ah… Apollo, her brother in Greek myth… a rather "passionate" god, if I remember correctly. So many lovers yet no one returned that love back… except one person who was then slain… wait didn’t Apollo also killed Orion in some myths trying to protect Artemis’s chastity?’

“I know, but can you do it for me? It will be the only time I ask you for something! If not, well, I had to exert my will as your goddess and wife to make you come with me!”

“Alright, but I will want something in return.”

“That’s fine! So long as I can shove you in Apollo’s smug, pretentious face!”

He never saw Artemis make a face like that before.

“… Alright, so when’s the banquet?” he said with a smile.

“… Hey!! I’ll be taking today and tomorrow off!! My goddess asked me to do something!” Cirrus yelled at the smiths.

“Now… do you wanna use the clothes from- “

“Of course! You still have it in your shadow, correct?”

“Still in there Ai.”

“Oh, before we go, Cirrus,” Artemis said in a calm and firm voice. “Are you still up to be converted?”

“Then shall we do it somewhere private?”

“Oh! we can go back home!” Ai said. “Nox is currently out eating at her favorite cake shop!”

A chill ran down Cirrus’s back.

“Is that so… tell me Ai how long have you and Cirrus been together since I left?”

“Um, I would say over seventy-seven…. oh.” Ai realized what she had asked.

“Well, I’ll be sure to have my fill tonight, Cirrus! Ai, you can join us after I had my missed time with him.”

Back at home a while later at night.

“Honestly to think you have these tastes…” Artemis said wearing a bunny girl outfit, leggings and all.

“You should ask that to Ai as well her tastes certainly… changed over the years. And you not have any right to critique my tastes when we have similar tastes! Lets not forget Boar play."

“Ahem!" Artemis cleared her throat. "You are right... lets just move along shall we?"

“Fine by me. So tell me did you enjoy each other in Melen?”

“A little, now are you ready?”

She pricks her finger and drops her blood onto Cirrus’s back. He could feel a warm sensation on his back and just as quickly as he felt it, it was already gone and done.

“There. Now to update your status and…” Artemis begins to update his status.

As she started to read it her eyes began to widen more and more.

“You’re seeing my skills, aren’t you…”

“S-sorry… I just didn’t think you will have this amount of an overwhelming advantage over other adventures… if this were to get out, every god would really do whatever it takes to have you.”

“Then it is a good thing it is my lovely wife who knows it… and also Astraea and Ouranos… and Fels.”

Cirrus takes out a sheet of paper from his shadow and hands it to her.

“Mmm… mmm and here! All finished!”

She hands him his new status.

“Unbelievable. That skill alone warrants you to be highly coveted. Fufu! I can see why Astraea and Ouranos placed so much faith in you all those years ago. Now can we get back to our time lost?” she said, sitting on the bed with a smile. "Finding and explain to Chang'e took far longer then what I would have liked. So now I liked to be spoiled a bit!" 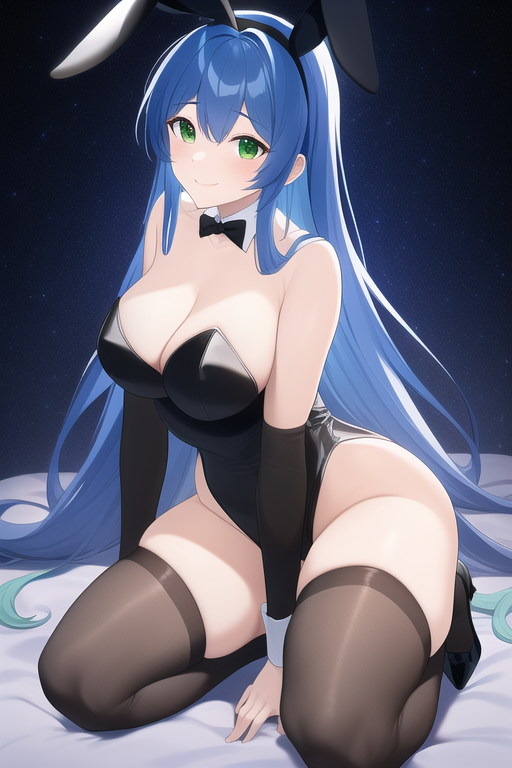 Artemis in a bunny suit, as per Cirrus's request.