Soon after returning from finding Bell, Hestia, and Ais.

Walking through the Rakia camp were Cirrus and Artemis.

Not a single person wished to confront the enemy. When one gathers the courage to try and stop the Uncrowned Emperor, he simply glares at them.

“Hm!?” Cirrus glances at the soldier with intimidating eyes and a bloodlust that makes the soldier’s eyes roll up.

"!!" He was scared so much the soldier passed out.

Cirrus and Artemis did not say a word as they walked up to the fanciest tent in the camp.

They entered without care to find Ares eating grapes while a young man with blonde hair. The young man was handsome looking but had a look of exhaustion on him.

“Ares, we need to talk,” Artemis said, coming up to him.

“Ah! So Orario has finally decided to surrender! Very well, I—”

“No, you idiot!!” Artemis shouted. “Why would Orario ever surrender to you!? You have never gained an inch or grain of dirt against Orario!”

“… Ah-hahahaha!! What a funny joke!” Ares laughed brazenly. “I don’t like it.” He said suddenly with an unamused expression. “Marius ties her up and—”

“Um… my lord I um… don’t wanna,” Marius said as Cirrus was staring daggers at him. “She is with the Uncrowned.” He was sweating and backing away slowly.

“Ares, if you so much as try anything like that, my husband, here,” she tapped Cirrus’s shoulder. “Will burn your country to the fucking ground, got it!” Artemis said with a smile and a frightening look in her eyes.

“Hahaha!! Another joke!” He said, coming up to her.

“My lord, please!!” Marius quickly grabbed Ares’s cape. “He will actually do it!! All of Rakia will be destroyed!!!”

Artemis punched him on the chin, knocking him out.

“Phew!” she said with a proud look. “That felt really good! Hey, prince, when he wakes up, tell him if he tried and kidnap another god from Orario my Familia will—”

“I completely understand my lady!” Marius said quickly. “But as you know, Lord Ares is… Can I ask of you to just kinda… knock him out if he goes too far again?”

“If he does this again, I’ll shoot an arrow between his eyes.” She holds out her hand and Cirrus gives her an arrow. “This is his last warning.” She then threw the arrow into the seat. Ares was eating grapes.

“Take care, prince,” Cirrus said. “I wish you the best of luck.”

Cirrus nods as he picks Artemis up.

He walks out of the tent and the sound of the earth breaking rang through the camp.

“Gulp!” Marius swallowed his saliva. “Oh, man… He was kinder than what I had thought. But now I have to somehow convince Ares to not do something stupid… Fuck.”

Running back to Orario.

“I feel sorry for the guy,” Cirrus said, carrying Artemis in a princess carry.

“I feel the same, the child must have his hand full trying to curve Ares’s stupidity,” Artemis said with her arms around Cirrus’s neck.

“Maybe we should find Aphrodite. She has been away from Meilstora for a long time.”

“I guess Hera must have dragged her along somewhere. I would have figured given Hera’s eye for talent, she and Aphro would be running the country by now.”

Way on the fringes parts of the continent, The Frontiers. Hera along with the Aphrodite Familia are traveling by carriages.

“Uuuuugh!! This is such a pain!!” Aphrodite complained.

“Quiet. We found a lead to my remaining child, and I won’t have you complaining.” Hera said.

“You can be nicer, you know! Without my charm, your search would have taken years!”

“I am nice to you. In fact, I restrained myself from not ripping your pretty little breast off from how loud you are at night!” Hera said with a forced, creepy smile that was restraining all of her anger.

“Do not worry, Lady Aphrodite!” said Becklin. “We will be much quieter next time!”

Hera with her bottles of wine. 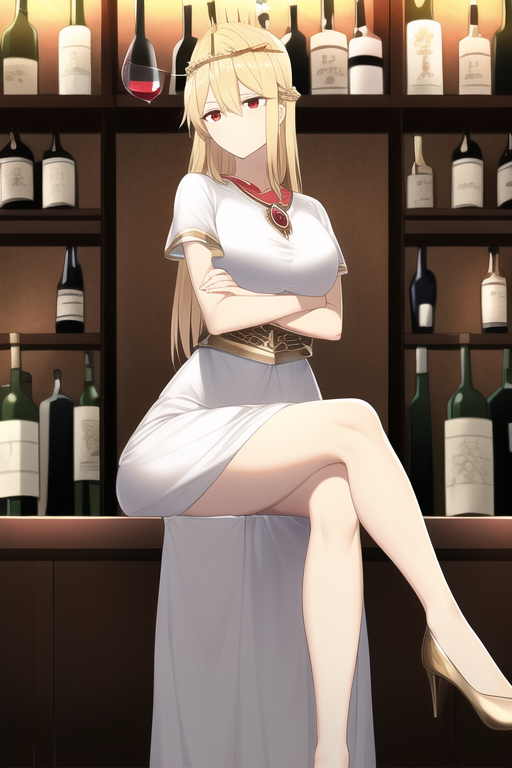