Dogbeater leaned back in his seat, mouth wide open. He was snoring loud enough that we could hear it from outside. His breathing was fast though, as if he was struggling for air.

“Hmm, looks like your idea worked,” Dregs said. He knelt down and grabbed a pebble, then flicked it over the fence. It clinked on one of the cages and a dog barked a couple of times in alarm.

Dogbeater didn’t so much as flinch.

“Side door,” Dregs said. “It’ll have a weaker lock, I bet. Did you have a way to breathe in there?”

I shook my head. “We’ll be... well, I’ll be impacted by the smoke the same way he is. I don’t actually know enough about hobgoblin anatomy to say whether or not it’ll be a problem for you.”

Dregs chuckled. “We’re tougher than you lot, but we need to breathe as much as any human or elf.”

I nodded, then opened my satchel and pulled out my rope. “We’ll tie him down as soon as we’re in. I think we can tie him to his chair?”

Dregs nodded. “You thought of everything, huh?”

“No. I thought of a few things. I tried to think of everything while keeping in mind that I’ll fail to notice a lot. Next time I’ll be better.”

He sniffed, then extended a hand to my rope. I gave it over after a bit of hesitation and he started to tie it into a long loop. “Like this,” he said before making a knot so quickly that I had no idea what he’d done. “Actually, just let me tie him up. We’re going to need a gag.”

I cursed, then took off a boot and freed my sock. It had a hole in it anyway. “This’ll do?”

He shrugged, clearly not caring that much.

With Dreg’s help, I climbed onto the top of the fence, then the hobgoblin stepped back and got a running start which ended with him vaulting up the fence and swinging over it, all without making much sound at all.

The dogs barked, louder and more alarmed, once we were in the courtyard. Dogbeater didn’t move though, which was a good sign. I mostly ignored the dogs, though I had [Blight] ready to fire at a moment’s notice, just in case.

Dregs reached the door and tried to open it. It was locked, obviously. “You know how to pick locks?” he whispered.

I shook my head.

He stared back. “Well, why are you looking at me like that?”

“Do I look like a thief?” he whispered. I made a so-so gesture and the hobgoblin growled. “Idiot kid. We’ll have to break in through the window.”

“Wait,” I whispered before touching the door. I looked along the edge of it, taking in what I could. The door didn’t have a locking bar, so the lock was part of the handle. The door itself was all wood, the handle was... brass? Some sort of metal.

I pressed my hand next to the handle and pushed [Blight] into the wood.

“What are you doing?” Dregs asked.

“Breaking the door... but quietly.” I spread [Blight] deeper into the door and then through it and around the handle. After a long two or three minutes I pulled my hand back and took a few deep breaths. That was nearly a third of my mana gone. The wood was rotten though.

With a foot against the wood under the handle, I grabbed onto it, then jerked back.

The handle came off the door--partially. It was enough that the catch didn’t stay in its place and I was able to pull the door open.

The air inside was thick and warm. I put on my mask before pushing in.

Dogbeater had a nice-enough place. It was rough, sure, but he had a proper cot, a sink, even three whole lights. A bookshelf sat in the corner across from his fireplace, and he had a few drawers around with clothes and things in them.

Dregs didn’t gawk. He flicked the rope out and had it lassoed around the man in seconds. “The door,” he said.

“Noise,” he hissed.
I ran past him and to the fire, then shut the flue completely after climbing up onto a metal box full of coal. After closing the fireplace’s door and shutting the smaller vents on the door, I figured the fire would die off in a minute or two.

Then I went to the door and opened and closed it quickly a few times, wafting in big waves of air that cooled the one-room home down.

“There,” I said before I closed the door. “If you feel drowsy or feel a headache coming on, we leave.”

Dregs nodded, but he was mostly fixated on tying Dogbeater’s hands and feet to his chair. He was quick and efficient, using knots that looked like they were meant to be easy to take apart from the outside, which made sense. We didn’t want to leave any evidence.

Dogbeater woke up with a start and I was quick to shove my sock into his mouth while he was still blinking awake. Then I had my knife out and pressed to the underside of his hairy neck. “Move and you die.”

He paused, eyes going wide as he took in the room.

He wasn’t the only one to wake up though. There was a cage by the bed with some creature in it that shifted around at the noise. Had I almost killed a dog? That actually made me feel a little guilty.

“Look, mister Dogbeater, I have questions, and you’ve got answers. This is a transaction, okay?” I asked.

He glared at me.

I glared back. Then I reached into my pocket and pulled out a perfectly tasty mushroom and held it before him. “This is the alternative. Do you know what this is?”

He looked at the mushroom. It had a nice red cap, with a few brown warts on it.

“Mushrooms are really good at absorbing heavy metals. Do you know what heavy metal poisoning does? You do? Well, let me tell you, it’s a million times worse when the mushrooms are magic. See, the metals are absorbed by your liver which... well, there’s a lot of bottles here. I’m betting yours isn’t in great shape. Then the metals travel all the way up to your brain. In tiny quantities it’s not so bad. Permanent, but not bad. Like annoying little scars. But this--” I wiggled the mushroom. “This makes it worse.”

“If Dogbeater here eats this, his mind will stop working so well. Tomorrow he might not remember an appointment. The day after, things like math might be harder. He won’t forget, not yet, but it’s going to take so much more effort to think. Day by day his memories will slip, his thinking will grow more sluggish and slow. One day he’s going to rest in his bed and just... forget. And then he’ll forget how to breathe and his heart will forget how to beat, and that’ll be it.”

Dogbeater was staring at the mushroom as if it was god. A god that knew all the shit he’d done.

“So, I’m going to remove that sock from your mouth, and you’re going to answer my questions, and you won’t have to eat this. Okay? If not, I get creative. I know of this neat trick, with salt and bleach and vinegar and a spoon. Have you ever heard of that one?”

He shook his head.

“See, the trick’s easy. I ask a question, and when you lie, I pour salt in one of your eyes. Just one. Then if you lie again, it’s the vinegar. Then the bleach.” I smiled. “Then the spoon. After that, we go to the other eye. Do you have any salt in here, mister Dogbeater? Do you own a spoon?”

He was hyperventilating. I suppose I was supposed to be grossed out by all of this, but I just felt rather numb.

I removed the sock and he let out a pitiful wail. “Okay, now my first question,” I began.

I knew we didn’t have too much time, and I trusted his answers... well, not at all. He didn’t know a lot of things. His part was small and unimportant. He was just the guy who would beat the dogs until they listened or were rabid enough to use.

Dregs asked a few questions of his own, usually when I paused for a little too long. We didn’t need Dogbeater to have time to think too hard.

Dogbeater looked over to the cage by his bed and grunted. “That’s a Panbadger. It’s magic. They bond with people. Wanted to use it to train since when it’s all grown up it can take out a lion on its own.”

He growled. “Little shit keeps nipping at me. Can’t beat the bond out of it.”

I shrugged. “Got any more questions, Dregs?”

“None,” he said with a viscous grin.

“Mask on,” I said. I plopped the mushroom I’d been threatening Dogbeater with into my mouth, then pulled my mask up.

The idiot started screaming at me and pulling against his bonds.

Then I reached into my satchel, pulled out a teeny-tiny [Dead Man’s Cough] and spurted its dust into his face.

Dregs and I watched Dogbeater struggle against the ropes until he went slack, his face an ugly red.

“We need to restart the fire and get the brick off the chimney. We’ll shove one of his shirts in the chimney down here too, fill the room with smoke again.”

This chapter was brought to you by my friend SelkieMyth! He commissioned this as a gift, and I thought it would be neat to share it while givnig you all a small gift too! (Yes, I can be bribed for extra chapters with sufficiently awesome artwork) 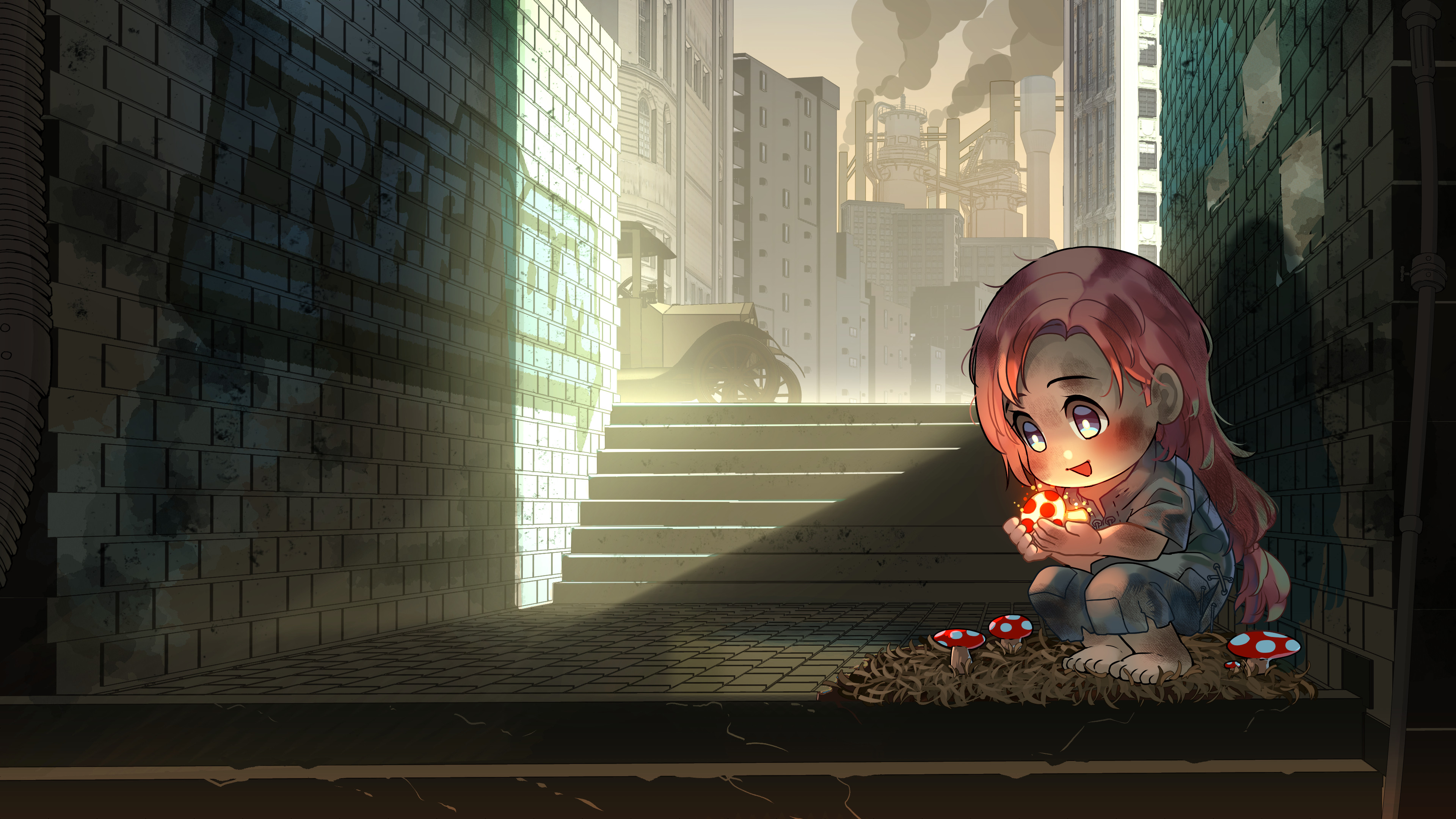 Art by the spectacular Fuyu Dust!