It took another couple of weeks for the mushroom’s I’d collected and grafted together to start showing results. When the day finally came I rushed back to the farm, practically skipping on my way back.

I, of course, had my badger with me.

At some point it just became a habit to carry the panbadger along wherever I went. Mostly that was between home and the farm, which was a safe enough route where no one really bothered me.

I don’t know how long it would take to bond with the badger but... we weren’t quite there yet. My thumb still had a bandage wrapped around it from where the little bastard had grabbed on and refused to let go. He had these nasty little teeth.

The poor badger wasn’t nearly as obstinate as I was though, so if he thought I would stop trying just because he was a little nippy... well, maybe eventually. I think he was mostly getting used to me though. He didn’t growl as much and the look on his face wasn’t quite as distrustful.

Also, he was getting fat.

I couldn’t let him out of his cage yet... I didn't think. But I was going to do it anyway. We’d try it in that little burnt-down husk of a house I was growing some mushrooms in. If he wrecked the place then it wouldn’t be a big loss. And if he ran away... well, my mom complained about him a lot. He did stink a bit.

Arriving at the farm I set the badger down atop my unfoldable cooking table. I hadn’t been using it recently, so I was glad to have a use for it again.

I set up my workbench, which mostly just meant that I cleaned it off with a smidgen of rubbing alcohol and a rag, then I placed a tray atop it. After that, I collected the results of my experimentation.

Of the nineteen combinations I tried, ten survived. That was... a bit unfortunate. Most (though not all) of those that had failed were the mushrooms which were combined with the [Blur Glow Lichen]. It seemed as if there was enough of a difference between a mushroom and a lichen that combining the two wasn’t working out.

I supposed it was like trying to breed dogs and cats together. Both were mammals of about the same size, but they had enough differences between them to make crossbreeding impossible.

Something to keep in mind, but not a big loss in any case.

Opening a notepad, I checked off the list of surviving specimens.

My successful combination rate, I noted, was a lot higher on average when the combined specimens didn’t already include a merged mushroom.

“Well, no dilly-dallying,” I said.

I picked up the first new creation in a gloved hand and inspected it. The [Blackbottle] mushroom was interesting mostly because of its ability to collect water. I inspected one of those, just to have a fresh frame of reference.

[Blackbottle] - {Uncommon}
A mushroom frequently found in humid climates. It will fill with water and when ripe, will burst apart releasing watery spores onto the ground around it. A source of untainted water.

The mushroom itself usually looked like a rock, with a very short stem and grew to be sort of squat and fat.

The mushroom that combined the [Blackbottle] and [Brown Chanterelle] looked the same, but brown.

[Brownbottle] - {Uncommon}
A nutritious mushroom frequently found in humid climes. It will fill with water and when ripe, will burst apart releasing watery spores onto the ground around it. A source of untainted water. Its meat is nutritious and healthy, though the stem will contain the impurities filtered out of its water.

Well... that was useful. I could probably create a mana-infused variant of it. Bring a few of these along and I basically had a pre-made meal.

Just in case, I gave the [Brownbottle] a bite and regretted it immediately. It tasted fine. Nothing special, really. The problem was the gush of lukewarm, mushroom-flavoured water that spilled down my front.

The badger made a noise that was too close to a snicker for comfort.

I didn’t throw the mushroom away. It could still be useful. If I was going to be diving deep into the dungeon then... yeah, I’d need a source of water and food and this was both. All I had to do was carry some spore samples and... basically learn how to make the mushroom grow way, way faster.

With some effort and limited mana, I could probably make a mushroom grow in under an hour. Pretty good. But not good enough.

I shook my head. A problem for later.

The next surviving sample was the combination of [Blackbottle] and [Beige Puffball]. The result, somewhat predictably, was the [Black Puffball].

[Black Puffball] - Uncommon
A common sight next to stale water and other humid detritus. The black puffball is an edible mushroom in its early fruiting stage which grows into a ball filled with spores in a muddy goop that are released on impact. Not very nutritious.

I... had no reason to continue cultivating this one. I took note of the mushroom and its properties, in case I ever wanted to breed it once more, then made a final note to dispose of it later.

There would always be more failures than successes.

The next was more interesting. My first combination using the [Purple Capped Night Watcher] that I’d stolen.

The mushroom was smaller than the [Blackball] with a more purplish colour to it and a few lighter spots on its surface. It seemed to glow a little from within.

[Blackbottle Night Watcher] - Rare
A rare mushroom not found in any natural environment. This small, edible mushroom contains a basic alchemical reagent that allows the consumer to see in low light conditions. Can be used in several alchemical concoctions.

“Oh, yes,” I said as I brought the mushroom closer. I used my new [Poison Handling Expertise] on it, just in case, but it came back with nothing. Not poisonous, then! I had a proper, usable magic mushroom!

It wasn’t insane, but the utility couldn’t be denied!

I squeezed it a bit, testing its hardness, then gave it a sniff. It smelled nice enough, and didn’t burst apart at a light squeeze. This would definitely be added to my kit.

Feeling pretty great about myself, I moved on to the next! It was an ugly, lumpy mess of a mushroom that looked like it was drooling a little.

The only interesting thing here was that the result was {Common} instead of {Uncommon}. So rarity could degrade under the right circumstances? Interesting. Otherwise, not the most useful find.

The last of the results from combining [Blackbottle] mushrooms with anything else looked... a little strained, actually. The mushroom was all black, with a few bands of lighter grey. It looked as if the entire thing was straining against itself. I’d been pretty careful with that one so far. It was the result of combining with my [Horse Pop Mushroom] which was a kind of mushroom which contained methane and which was mildly toxic.

[Bottle Pop] - Rare
A mushroom which fills with flame-proof spores, water, and methane, each within their own separate sacs within the fruiting body. On receiving a strong enough impact, the mushroom explodes, lighting itself on fire and spreading its hardened spores out around it to penetrate nearby materials. The spores are mildly poisonous. The fumes created by the explosion are mildly toxic.

“What the hell,” I muttered.

It was a bomb. A bomb mushroom.

That should absolutely not be possible. At least, not naturally. I shook my head and set the mushroom down carefully. I would be putting this one outside soon. There were a few abandoned homes nearby, some had windows. Maybe I could hide behind one to see what kind of explosion I was dealing with here?

Yeah, that was probably for the best.

Could I use this as a weapon? Yes. Should I?

It had its place, and I’d rather have it than not, but I couldn’t see myself being stupid enough to use close-range explosives as my primary means of defending myself.

Another kind of mushroom to keep an eye on. Which only left five more to poke at.

Fluff is now available as epub, paperback, and audiobook! 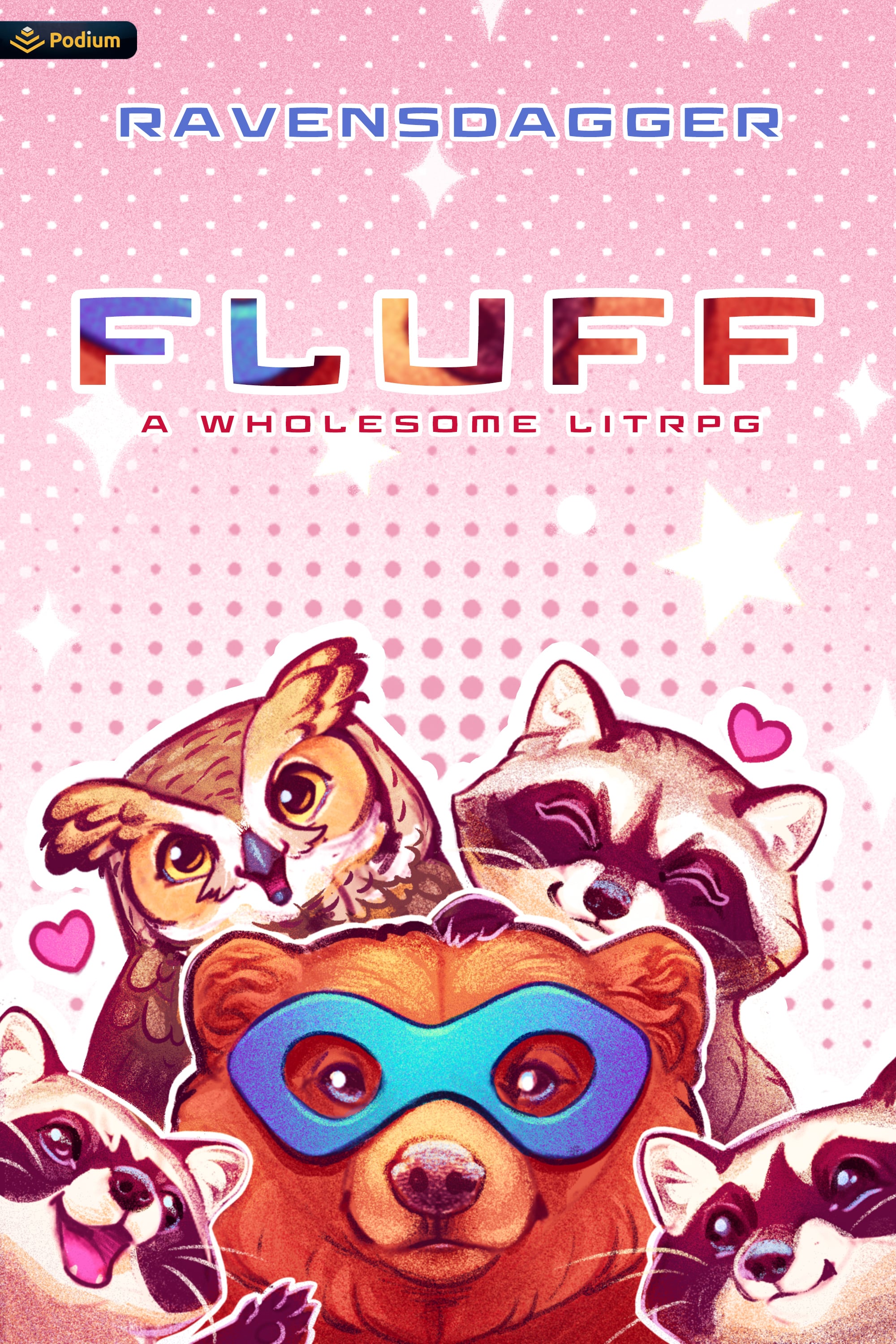 A socially anxious college student discovers she has superpowers—and they need babysitting—in the first book of an original superhero series.

Power Day occurs every year on September 15. Across the world, formerly regular people awaken with superhuman abilities—and labels to go with them. They become the next generation of Heroes . . . and Villains.

September 15 is also Emily Wright's first day on campus. While everyone else is out celebrating the start of their college career, Emily's hiding in her dorm room. She wonders if it's possible to earn a degree while completely avoiding eye contact with anyone.

All she wants is to learn a little and maybe get over her anxiety. Instead, she's granted a superpower and categorized as villainous. So, Emily panics—and inadvertently conjures up a pint-size supervillain sidekick.

Emily has no intention of doing anything—evil or otherwise—with her powers. And if she has to babysit an increasing number of "little sisters" in order to stay under the radar, so be it.

But can Emily gain control of her life, or will she drown in a sea of supervillainy and cuddles?

The first volume of the hit LitRPG fantasy series—with more than a million views on Royal Road—now available on Audible and wherever ebooks are sold!

Check it out here: LINK