Within a dark apartment.

A thin layer of haze permeated the air from heavy conditioning.

A slim figure rested his head lazily against his seat.

Stuffing his oily hands into a bag of potato chips, and then returning to a controller, calibrating the movements of the character on-screen.

His name was White Shigaraki. A young man who seemed unhealthily scrawny for his age.

Under an unshaven look and greasy hair, his dark-hazel eyes darted about while following the pace of two characters exchanging blows relentlessly.

White had been so absorbed into the game, that he didn't realize that his opponent had already fallen.

He glanced at the corner, where his HP was.

It was full. He had not even taken a single hit.

Left a little unsatisfied, the young man dug into the packet of junk food and stuffed a mouthful down.

Even though it was a rather popular online fighting game decades ago, it had turned obsolete over the introduction of immersive virtual reality. Then why was he playing a game like this?

It was merely on a whim, as he was taking his regulated break. Full diving would start to affect the body past half a day of usage, and even White who loved to stretch the limits of his playtime could not compromise on his own health.

The 18-year old turned the A/C on full blast to relieve himself of the sweat on his back after playing for hours. After a bit of rest while twiddling his thumbs around the customizing interface of the game boredly, he leaned against his recliner and started another match.

It was dinnertime. White decided to eat something proper to fill his stomach after a while. He tore open a cardboard box and withdrew a cup of instant noodles. From another box at the side, he retrieved a bottle of chilled tea.

Finishing his food quickly and efficiently, White stood up after kicking away the food packaging.

The timer beeped on his monitor, indicating a refresh for another session of VR diving.

Stepping over a bunch of dirty laundry, he made his way over to his desktop sleazily. Clicking on the icon of a game called  ｢Insinity｣, the application booted up.

The hottest VR-MMORPG of its time, with impeccable visuals and a well-balanced PVP system.

White had played in virtual reality for longer than he could remember, but he could still feel excitement whenever he dived into this particular game... no, world. Each time he did was like a fresh experience to him, never getting bored of it since the game was advanced enough to generate content on its own though an advanced level of code. Technology of the future had truly made something like this possible.

A game client laced with a golden border expanded in full screen promptly after loading, the title screen appeared----Two blank lines were aligned in the center for credentials. White leaned closer towards the screen, along with the tapping of his keyboard.

The words---- User confirmed emerged from the screen. From his baggy, sleep-deprived eyes, there was a glint of anticipation in them.

He could use the game to escape from reality again. White reached into the drawers below his desk again, grabbing what seems like a handheld console controller, in addition to a sleek metallic-black visor. The horizontal slit which indented within the electronic circlet lit up as soon as he touched it. Just like how he had always done it, White donned the visor around his head.

The lock at the hindmost clicked snugly in place with a "Pachin!".

His grin grew wider, almost to a creepy degree. But that didn't matter, no one could find him here. No one would judge him here. He was free to indulge in whatever that he wanted without being a nuisance to anybody.

Even though his self-esteem had been dragged down the mud a long time ago, White still had his sanctuary in his small, dark apartment.

He didn't need friends or family either, because games were better to him. It reduced the need to interact with the real world, and he appreciated that fact.

That was the good thing about being a NEET. He just had to stay in his apartment forever.

Following the resonation of the inorganic voice, the slit began to flash vividly in an emerald mint.

White smiled vividly as he felt his sense of sight getting sucked into the opague screen before him. It was the familiar feeling of being immersed into the alternate world.

It hadn't been a full day, but he was already breaking into excitement like the first time he had played this game again.

Virtual reality----- Where not even the best handheld consoles could match against.

And now, he would return to where he belonged. His true home.

The young man froze. He had not seen the familiar visuals which accompanied a usual synchronization with the VR visor. All he was staring at, was a pitch black screen with nothing on it.

Maybe it was a hardware error? Was there a patch?

He decided to be patient and wait for a few minutes more.

One minute. Two minutes. And when the third minute had passed, he thought that this was an unusual occurrence.

No matter, he could fix it.

But as White attempted to remove his visor off his head, he found out that he was only receiving the sensation of his hair at the back.

Had he already entered virtual reality? Then where was the interface at the bottom corner of his eyes?

But in the next moment, he found out something even stranger.

He couldn't take off his visor. And his vision was completely cut off from him.

His eyes were in a state of darkness.

White had not panicked like this in a long time, and it took him a few extra seconds to realize that he was 'stuck'.

His turbulent thoughts raced around his head---- Was this going to be something which prevented him from logging out?

Was it going to become the infamous death game within virtual reality?

White chuckled to himself in self-depreciation. He knew something like that would never happen in real life. Even then, more than anyone else, White desired the experience of a new life, no matter where he had to go.

He had fucked up after all, and life was unforgiving without a second chance. He would live with his mistakes forever, knowing that he was the one responsible for what had happened to him now.

He had become a failure, and that was the truth.

So a fresh start, a new beginning which allowed even a NEET like him to obtain such a ticket wasn't all that bad.

Minutes passed in silence as White had also finished indulging himself in those stupid thoughts. This was not a novel anyway, there was no way that-----

----Before he could think of such, the moments of silence was finally broken!

A tremor made White lose his balance.

His cracked lips opened for the first time in weeks.

The screen, no, his vision began to turn red! The space shook violently, and he could feel his very being tremble, as if something was trying to pull him off his feet----

The earthquake continued for a good minute, and he could hear the falling of objects near him. From that sound, it was mostly likely things in his apartment. The sizzling of uncleaned dust fell from the ceiling, soot covering the top of his head.

He could no longer tell, nor did he have the composure to.

The young man heard the novels stacked along the shelves on his apartment walls drop to the floor and the sound of things on his desk breaking.

As he started to notice that only his vision was stolen from him, White tried to move around after hearing with his own ears. With some support, he instinctively felt around and arrived at his desk in his room.

With his trembling hands, the young man managed to hold on to the mask there. From the outline even without sight, he knew he had held on to the right object. From the increasing intensity of the tremors, White decided that it was best to put it on rather than keeping it in his hands. The red light became brighter in his vision as he was slowly putting the mask over his eyes: A black-white masquerade mask with geometric patterns.

As if it had a soothing effect, White's inner turmoil settled down just a little bit. But he didn't have time to breathe, as something even more unexpected happened in the next moment.

A beacon of light shot forth from the ceiling and enveloped his surroundings. With everything gradually painted white, the young man closed his eyes, unable to stare into the light. That brilliant illumination lingered for a long while before slowly fading away.

With the light gone from the apartment, the traces of its former occupant had completely disappeared. 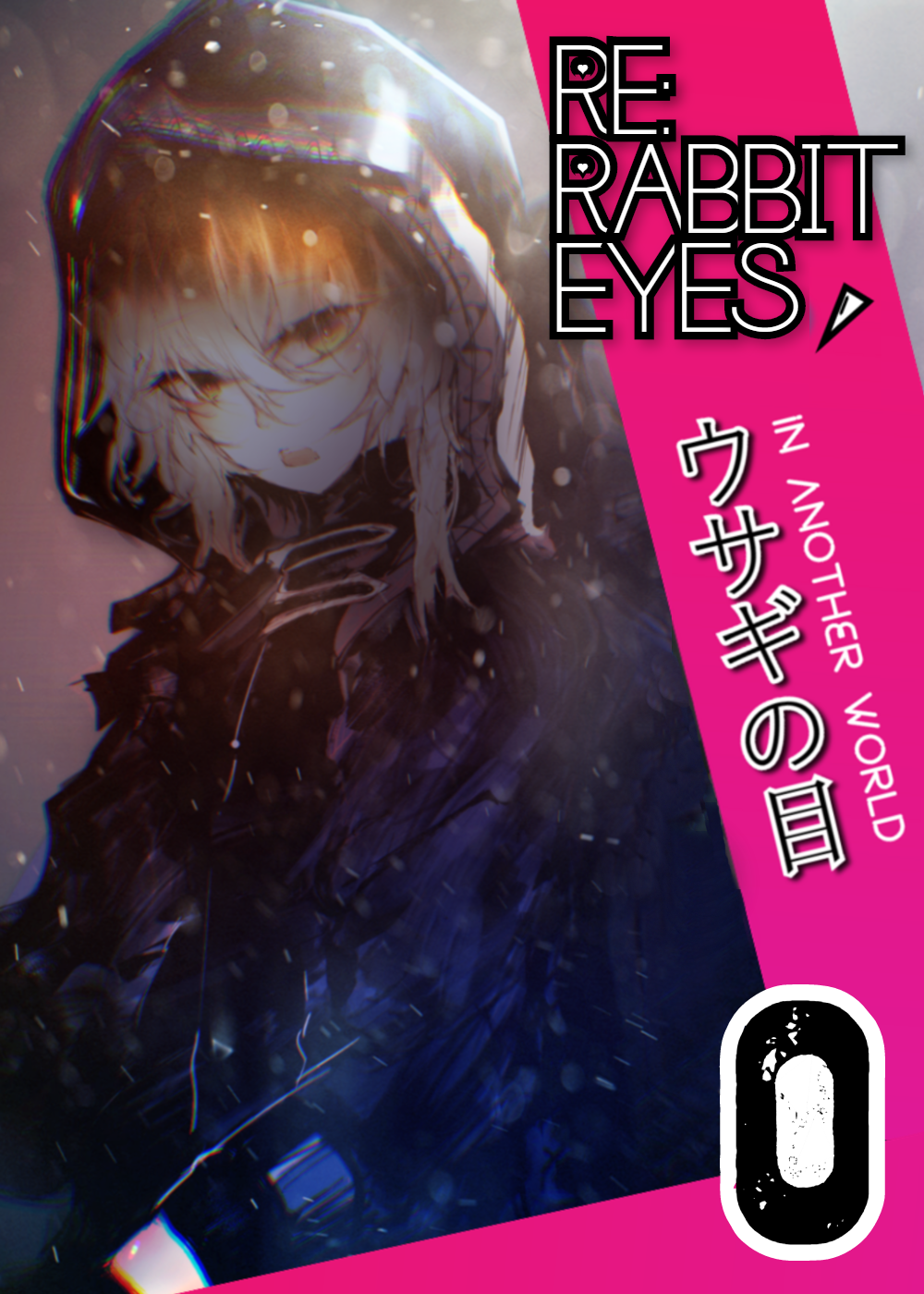 Re: Rabbit Eyes (A Yandere Harem)
Oldest | Recent
Search
Your changes has been saved.
Action Required